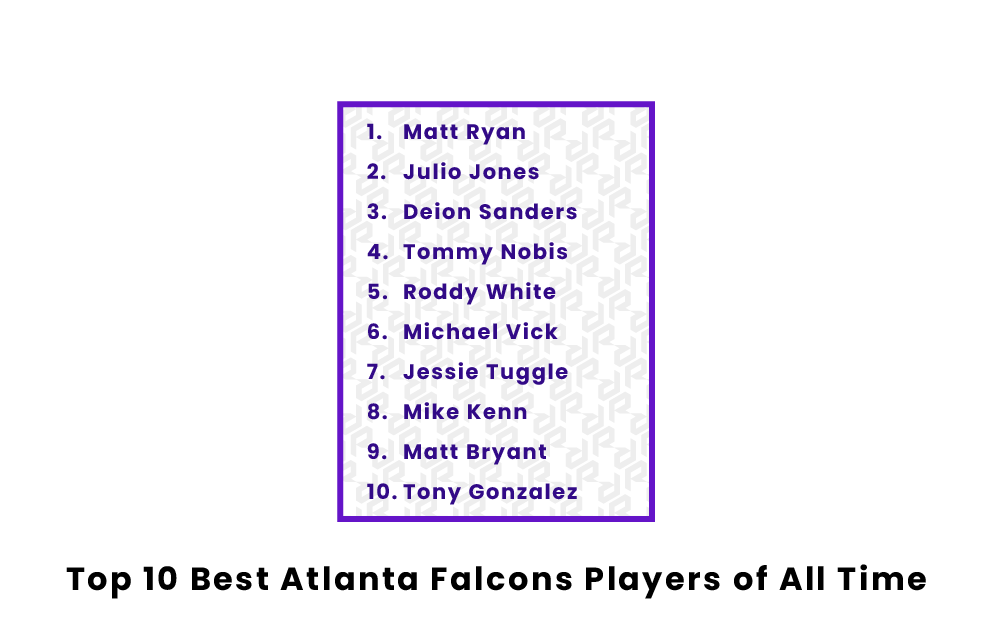 Who are the best Atlanta Falcons football players of all time?

Matt Ryan was a quarterback for the Atlanta Falcons. The Falcons drafted him with the third overall pick in the first round of the 2008 NFL draft out of Boston College. He played fourteen seasons with the Falcons from 2008 to 2021, where he put together a hall-of-fame resume. He threw for 59,735 yards and 367 touchdowns while completing 65.5% of his passes while with the team. Ryan’s career was defined by his elite 2016 season. He threw for 4,944 yards and 38 touchdowns while only recording seven interceptions.

Ryan was awarded the NFL’s Most Valuable Player and the NFL’s Offensive Player of the year. He was also selected to the first-team All-Pro for the only time in his career. He led the league in passer rating and set the NFL record for yards per attempt. He took the Falcons to the Super Bowl, where they lost to the New England Patriots. Even before this season, Ryan was dominant. In his first year, he was awarded the NFL’s Offensive Rookie of the Year. He also led the league in completion percentage in 2012. He was selected to four Pro Bowls. He currently plays for the Indianapolis Colts as of 2022 at the age of 37.

Julio Jones was a wide receiver for the Atlanta Falcons. He was drafted sixth overall in the first round of the 2011 NFL draft by the Falcons out of Alabama. Jones played ten seasons with the Falcons from 2011 to 2020. He caught 848 passes for 12,896 yards and 60 touchdowns. He received five All-Pro honors with two first-team and three-second team selections. He made seven Pro Bowls in his career, all with the Falcons. In 2015, he tied for most receptions in the entire league with Antonio Brown.

Jones was selected to the NFL’s 2010s All-Decade Team. He leads the Falcons in receiving yards and receptions all-time. He was a big part of Matt Ryan’s 2016 MVP season. There is not a single active player that has more receiving yards than Julio Jones since 2011. In 2021, he was traded to the Tennessee Titans. He currently plays for the Tampa Bay Buccaneers at 33 years old.

Deion Sanders was a cornerback for the Atlanta Falcons. He was drafted with the fifth pick in the first round of the 1989 NFL draft by the Falcons out of Florida State. He played five seasons for the Falcons from 1989 to 1993, where he was dominant as a cornerback and a returner. While on the Falcons, he was named to the first-team All-Pro two times and the second-team All-Pro once.

Sanders was also named to eight Pro Bowls in his career, including three with the Falcons. In 1992, he led the entire NFL in kickoff return yardage despite only starting in twelve games. Sanders was named to the NFL’s 1990s All-Decade team and is a member of the NFL 100th Anniversary Team. He was named the Falcons Ring of Honor and was a first-ballot hall of famer. He continued his career with the San Francisco 49ers, Dallas Cowboys, Washington Redskins, and Baltimore Ravens. He won Defensive Player of the Year in 1994 and retired as one of the greatest players the game has ever seen.

Tommy Nobis was a linebacker for the Atlanta Falcons. He was drafted with the first overall pick in the 1966 NFL draft out of Texas. He played eleven seasons with the team from 1966-1976. Given the nickname “Mr. Falcon,” he made a huge impact on the field. In 1966, he recorded an unofficial NFL record of 294 tackles (tackles were not officially tracked until 2001). He was also honored with the NFL Rookie of the year.

Nobis was selected to five Pro Bowls and had two All-Pro honors, including a first-team honor in 1967 and a second-team honor in 1968. Nobis is a member of the NFL’s 1960s All-Decade Team and a member of the Falcons’ Ring of Honor. He is yet to be inducted into the Pro Football Hall of Fame, but the team wrote a letter pleading his case. Nobis played his whole career with the Falcons before retiring in 1976. He, unfortunately, passed away in 2017.

Roddy White was a wide receiver for the Atlanta Falcons. He was drafted with the 27th pick of the first round in the 2005 NFL draft by the Atlanta Falcons out of UAB. He played eleven seasons with the team from 2005 to 2015. During that time, he was selected to four Pro Bowls. White had a stellar 2010 season where he led the NFL in receptions and was named to the first-team All-Pro.

In 2019, he was named to the Falcons Ring of Honor, just two years after his official retirement. Many give White credit for mentoring Julio Jones and helping him develop into the wide receiver he ended up becoming. He finished his career with 10,863 receiving yards and 63 touchdowns while catching 808 passes. His 63 touchdowns are the most in franchise history. He is currently a wide receivers coach at Johns Creek High School in Johns Creek, Georgia.

Michael Vick was a quarterback for the Atlanta Falcons. He was drafted with the first overall pick in the first round of the 2001 NFL draft by the Falcons out of Virginia Tech. After a dominating career at Virginia Tech. Vick joined the Falcons and didn’t slow down. He played six seasons with the team from 2001 to 2006. He could move the ball through the air or with his feet. He was a pioneer for a lot of the mobile quarterbacks we see today, such as Lamar Jackson, Kyler Murray and Jalen Hurts. Vick made three Pro Bowls with the Falcons and one later in his career. Vick was a lefty and favored rushing more than throwing. He defied everything that the traditional NFL quarterback was expected to do. He put on a show for fans with something none of them had ever seen before.

Vick finished his career with the most rushing yards by a quarterback in NFL history. He also has the most yards per carry by any player ever. Vick’s career with the Falcons was short-lived after he was arrested for hosting dog fights. He served jail time and was suspended from the NFL, which forced him to miss two seasons. He finished his Falcons career with Falcons throwing for 11,505 yards and 71 touchdowns while rushing for 3,859 and 21 touchdowns. He joined the Eagles and won Comeback Player of the Year in 2010. He would play six more seasons in the NFL with the Philadelphia Eagles, Pittsburgh Steelers, and New York Jets before retiring in 2015. He was inducted into the Falcons Ring of Honor in 2019.

Jessie Tuggle was a linebacker for the Atlanta Falcons. He signed with the Falcons as an undrafted free agent in 1987 out of Valdosta State. He would play fourteen seasons with the Falcons from 1987 to 2000. Tuggle was an inspiration because he made a long career in the NFL despite being undrafted and from a Division II college.

Tuggle made five Pro Bowls in his career and had a second-team All-Pro in 1998. He recorded 1,805 tackles in his career, including two seasons with over 200 tackles, in 1990 and 1991. He also had 21 sacks, six interceptions, and 10 forced fumbles. He even recorded five touchdowns. He retired after 14 seasons and was later inducted into the Falcons Ring of Honor. His Son, Grady Jarrett, is one of the best players on the Falcons today.

Mike Kenn was an Offensive Tackle for the Atlanta Falcons. He was drafted with the 13th pick in the first round of the 1978 NFL draft by the Falcons out of Michigan. He played seventeen seasons with the Falcons from 1978-1994. He is easily the best offensive lineman the Falcons have ever had. He made the All-Pro team five times, making the first-team three times and the second team twice.

Kenn was named to five Pro Bowls. He was extremely dominant early in his career, and many considered him to be the best lineman in the entire league in the early 1980s. Blocking stats such as pancakes and sacks allowed were not officially tracked during the time that Mike Kenn played. He retired after only playing for the Falcons and was inducted into the team's ring of honor.

Matt Bryant was a Kicker for the Atlanta Falcons. He went undrafted in the 1999 NFL draft out of Baylor and actually began his career playing arena football. He joined the NFL in 2002 and bounced around various teams before finding a short time home with the Tampa Bay Buccaneers for four seasons from 2005 to 2008 before heading to the United Football League. He joined the Falcons at the end of the 2009 season, and his career began to skyrocket. He would be the Falcons’ kicker for eleven seasons from 2009 to 2019.

After his success in 2009, he was awarded the George Halas award for all of the adversity he dealt with trying to get into the NFL. He would go on to break multiple Falcons records and become one of the best kickers the league has ever seen. He is the Falcons’ all-time leading point scorer with 1,168. He also has the most field goals and extra points made and attempted by any Atlanta Falcon. In 2016 he led the entire NFL in scoring while also being named to his only Pro Bowl.

Tony Gonzalez was a tight end for the Atlanta Falcons. He was drafted with the thirteenth pick of the first round in the 1997 NFL draft by the Kansas City Chiefs out of California. He played ten seasons with the Chiefs from 1997 to 2008, where he established himself as one of the best tight ends of all time. He joined the Falcons in 2009 and played five seasons for the team before retiring in 2013.

Gonzalez made the Pro Bowl in four of the five seasons and was named to the first-team All-Pro in 2012. He is a member of the NFL’s 2000’s All-Decade Team and was inducted as a first-ballot member of the Pro Football Hall of Fame. With the Falcons, he recorded 409 receptions for 4,187 receiving yards and 34 touchdowns. He joined the team out of his prime but still made a lasting impact on the franchise. He finished his career as the all-time leader in tight end receiving yards and the all-time leader in tight end receptions.

Who is the best Atlanta Falcons quarterback of all time?

The best Falcons quarterback of all time is Matt Ryan. He played 14 seasons with the team, where he threw for 59,735 yards and 367 touchdowns. In 2016, he won the NFL Most Valuable Player award and led the Falcons to the Super Bowl, where they ultimately lost.

Who is the best Atlanta Falcons running back of all time?

Gerald Riggs is the best Atlanta Falcons running back of all time. He played seven seasons for the team, where he rushed for 6,631 yards and 48 touchdowns. He is the Falcons’ all-time leading rusher and made three Pro Bowls with the team.

Who is the best Atlanta Falcons wide receiver of all time?

Julio Jones is the best Atlanta Falcons wide receiver of all time. He played ten seasons with the team where he caught 848 passes for 12,896 yards and 60 touchdowns. He is the Falcons all-time leading receiver. Jones made seven Pro Bowls with the team and had two All-Pro seasons.