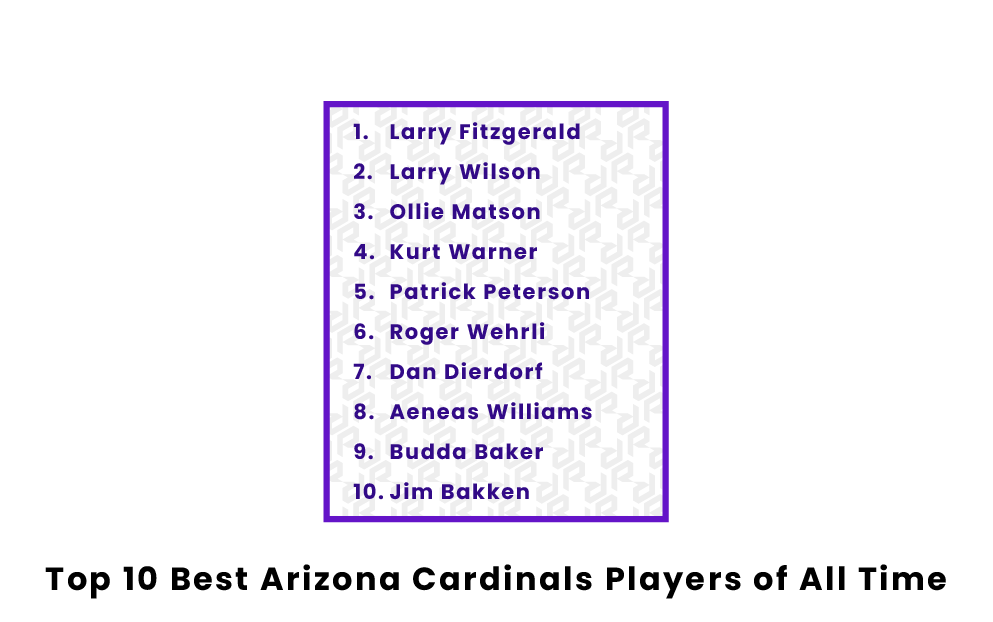 The Arizona Cardinals are an NFL football team located in Phoenix, Arizona. In 2008, they made NFL history by appearing in Super Bowl XLIII, led by star quarterback Kurt Warner. When you hear Arizona Cardinals, players like Larry Fitzgerald and Kurt Warner probably come to mind quickly, but when it comes down to who impacted Arizona football most, are they the best of the best? Read on to find out.

Who are the best Arizona Cardinals football players of all time?

Larry Fitzgerald is the greatest Arizona Cardinal of all time. Drafted in 2004 by the Arizona Cardinals as a wide receiver, Larry Fitzgerald left an indelible mark on Arizona football over his 17 years as a professional football player. Not only did he stay with the Cardinals for all 17 seasons and complete astronomical receiving feats, but he also did so with an incredible moral record: always giving back and showing love for others.

Although he only went to the Super Bowl once, he has an astonishing 1,432 career receptions. With only 29 drops over 17 seasons, Fitzgerald caught the ball 97.9% of the time. In fact, Larry Fitzgerald has more tackles than drops, as over his whole career, he got 41 tackles.

Larry Wilson was a defensive back from Utah for the Arizona Cardinals, who played from 1960 to 1972. For years he frustrated opposing quarterbacks. One of the most impressive of his stats was his five First-team All-Pro years. Larry Wilson played all of his 13 seasons for the Cardinals while they were still located in St. Louis. With 52 interceptions, 800 interception yards, and five touchdowns over his career, it is easy to see why Wilson was such an effective defender.

Ollie Matson played for the Chicago Cardinals during the 1952 through the 1958 seasons. Although he never played on a team with a higher than .500 win percentage, he was a very productive player. Not only was he an NFL athlete, but he waited to sign with the Cardinals so that he could compete in the 1952 Olympics. He added there a bronze medal in the 400-meter race and a silver medal in the 1,600-meter relay to his impressive athletic resume before joining the Cardinals.

With 5,173 rushing yards and 40 rushing touchdowns, 222 receptions for 3,285 yards and 23 touchdown receptions, nine touchdowns on special teams, and one touchdown on a fumble recovery, Ollie Matson was one of the greatest running backs of all time.

As the only player on this list other than Larry Fitzgerald to take the Cardinals to a Super Bowl, Kurt Warner deserves his spot as number four. He also won a Super Bowl with the St. Louis Rams. One of Warner’s most impressive feats was his 93.7% career passer rating, which paired well with Larry Fitzgerald’s 97.9% reception rating. Warner threw 32,344 passing yards and 208 career passing touchdowns. He also earned the 2008 Walter Payton Man of the Year, proving the strength of his heart as well as that of his stats.

Patrick Peterson was a cornerback for the Arizona Cardinals over the 2011 through 2020 NFL seasons. Currently, he plays for the Minnesota Vikings. Peterson had three First-team All-Pro seasons amid fierce competition from Stephon Gilmore, Richard Sherman, and for one season, Malcolm Butler. He also had eight consecutive Pro Bowl appearances from 2011 to 2018.

Roger Wehrli was a stellar defensive back for the Cardinals. He played during the 1969 through 1982 NFL seasons. Roger Wehrli was such an effective defensive player because he was a double threat. He not only led the team in his time in interceptions (at one point getting one interception per game in four consecutive games), but he also led the team in fumble recoveries.

With 40 career interceptions and 22 fumble recoveries, Roger Wehrli is a defensive two-edged sword. His versatility was unmatched. When the Cardinals struggled on defense in the 1981 season, they moved Wehrli to the left cornerback position, where he excelled. He made four tackles and stopped two pass completions. It did not matter which side he was coming from; Roger Wehrli was a brick wall.

Dan Dierdorf played as an offensive lineman for the St. Louis Cardinals during the 1971 to 1983 seasons. Standing at 6’3” and weighing 275 lbs, Dierdorf was a man to be reckoned with. In 1975, the Cardinals set a record for only allowing eight sacks in 14 games. Dierdorf did not miss a game in seven seasons, only taking time off for a broken jaw in 1977.

Aeneas Williams was a great defensive back for the Arizona Cardinals during the 1991 through 2000 NFL seasons, continuing the Cardinals’ legacy of impressive defensive backs.  In his career, he had 179 solo tackles, 46 assists, 23 fumble recoveries, and 55 interceptions, even more than Wehrli. Although Williams has incredible statistics, he was not as dominant in his time as Roger Wehrli. Aeneas Williams is tied at 19th for most all-time career interceptions.

Budda Baker is a safety currently playing for the Arizona Cardinals. Although he is still playing, Baker deserves to be on this list for his energy and accomplishments. His zeal for the game of football invigorates his teammates and gives them the strength to fight. Baker’s greatest quality is his leadership. Baker has only been playing since 2017, so he has many more years in him. In that short time though, Budda Baker already has four Pro Bowl Selections and two First-team All-Pro years.

Jim Bakker was a legendary kicker for the Arizona Cardinals. During his career, Bakker had four Pro Bowl appearances and two First-team All-Pro years. One of the biggest reasons he is on this list is because of setting a record for the second-longest punt in Wisconsin history: 90 yards.

Who is the best Arizona Cardinals quarterback of all time?

Kurt Warner is the best Arizona Cardinals quarterback of all time. He is the only one to take the Cardinals to the Super Bowl and has one Super Bowl win with the St. Louis Rams. During his career, Warner had an impressive 93.7% passer rating.

Who is the best Arizona Cardinals running back of all time?

Ollie Matson is the best Arizona Cardinals running back of all time. Matson achieved 12,844 total rushing, receiving, and returning yards during his career. He also has two Olympic medals, one in the 400-meter race and one in the 1,600-meter relay.

Who is the best Arizona Cardinals wide receiver of all time?

Larry Fitzgerald is the best Arizona Cardinals wide receiver of all time. He is one of the few Cardinals to have been to a Super Bowl and has a 97.9% catch-to-drop ratio. He was also known for having more tackles than drops.