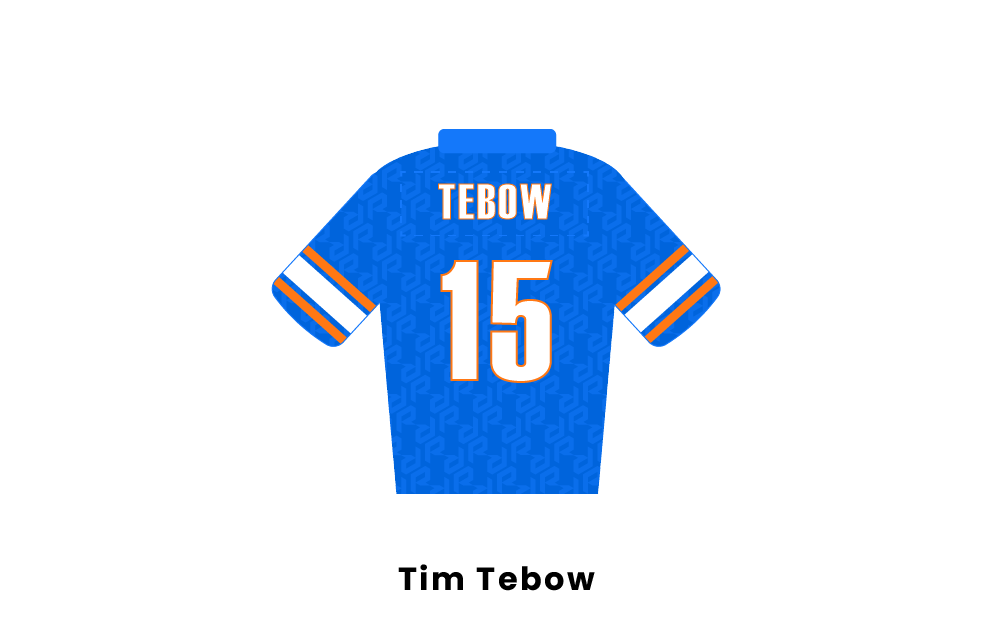 Tim Tebow is a Heisman Trophy-winning former quarterback who led the University of Florida Gators to two national championships. He played in the NFL for the Denver Broncos, New York Jets, New England Patriots, Philadelphia Eagles, and Jacksonville Jaguars before retiring. After his football career ran its course, he went on to work in broadcasting, as well as minor league baseball, and was signed in 2016 to the New York Mets.

Though his NFL career was relatively short, spanning only three seasons and a brief but unsuccessful return in 2021, he was undoubtedly an incredibly talented player and an absolute force in the world of collegiate football. Tebow shattered records, made headlines, and experienced fame at a level most student-athletes only dream of. His fervently Christian identity has garnered both supporters and controversy, making him one of the most talented and polarizing figures to play the sport. Tebow’s 2011 season with the Broncos was his most successful, and it fueled a level of fame known as “Tebowmania.”

Tim Tebow’s net worth is estimated to be between $5-10 million. He’s had several streams of income, including his athletic contracts, appearances and brand partnerships, a career as a sports analyst, and several book deals. He reportedly earned $10 million in total salary while playing in the NFL and received endorsements from major brands like Adidas, Nike, Jockey, and EA Sports.

Tim Tebow was one of the most highly sought-after recruits in the country when he signed with the University of Florida and went on to have a dominant college career. He joined as a freshman quarterback in 2006, a championship-winning year for UF. In 2007, he became the only player in the history of the NCAA to rush and pass for 20 touchdowns in a single season, set a record for the Southeastern Conference with 55 touchdowns made by a sophomore player, and led his team on a 14-game win streak. He became the first sophomore in history to win the coveted Heisman Trophy that same year. He helped win the Florida Gators two NCAA and two SEC titles, the first in 2006 and the second in 2008, threw for 88 touchdowns, and rushed for 57, for a record-breaking 12,232 offensive yards during his four years there.

After graduation, he was picked 25th in the NFL Draft by the Denver Broncos in 2010. Tebow had a successful run with the Broncos, but was traded to the New York Jets after they signed Peyton Manning. Unfortunately, he got very little playing time with the Jets and was soon released from his contract. He signed with the New England Patriots in 2013, only to once again be released during pre-season training later that year. In 2013, he also began work with ESPN as a college football sports analyst, but he couldn’t stay away from the field for long. In 2015, he signed a contract with the Philadelphia Eagles, but was released five months later.

As his NFL career fizzled, he pivoted to baseball in 2016 and signed a minor league contract with the New York Mets. He famously hit a homerun his first time at bat and had a respectable five-year run in the minor leagues before retiring. After stepping away from baseball, Tebow made a brief return to the NFL in 2021 and reunited with his Florida coach Urban Meyer to play for the Jacksonville Jaguars, but this time as a tight end. The position ended up not being a good fit, and he was released during pre-season.

At every setback, however, Tebow expressed humility and gratitude, qualities that have personified his career. He is quoted as saying he is “thankful for the highs and even the lows, the opportunities, and the setbacks. I’ve never wanted to make decisions out of fear of failure, and I’m grateful for the chance to have pursued a dream.” Today, he continues to work as a sports analyst, putting his vast knowledge of the game of football to good use. Tebow promotes his philanthropy and faith through his charity the Tim Tebow Foundation.

Tim Tebow is widely regarded as one of the greatest players in the history of college football. He has a staggering list of accolades. While playing for the Florida Gators, he led the team to two national championships, one of which won him MVP that year. His other awards include:

Tim Tebow was born to Bob and Pam Tebow, along with siblings Robbie, Peter, Kathryn, and Christine. He was born in the Philippines, where his parents were stationed doing Baptist missionary work, and moved to the United States at the age of three. He was homeschooled but was able to participate in high school football at Ponte Vedra high school in Jacksonville, leading to his being recruited by the University of Florida. Throughout his wild ride as one of the most well-known players in the nation, Tebow frequently credited his faith for his success. He promoted his Christianity as central to his identity, which often caused him to be a lightning rod for controversy. In 2020, Tebow married 2017 Miss Universe winner Demi-Leigh Nel-Peters. The two share a fervent love of Christianity and celebrate their shared faith through their missionary work and philanthropy.

Who is Tim Tebow?

Tim Tebow is a former college football star who played quarterback for the Florida Gators and is the first sophomore in history to receive the Heisman trophy. After graduating, he moved on to the NFL, playing for the Denver Broncos, New York Jets, New England Patriots, Philadelphia Eagles, and Jacksonville Jaguars, as well as for the New York Mets as a minor league baseball player. Since retiring from the field, he has remained active in sports broadcasting and continues his work as a philanthropist, building a brand on the foundation of his success as an athlete and identity as a Christian.

What school did Tim Tebow play for?

Tim Tebow played for the University of Florida, located in Gainesville, Florida, from 2006-2009.

Where was Tim Tebow born?

Tim Tebow was born in Makati City, Philippines, on August 14, 1987. His parents were Christian Baptist missionaries stationed there at the time, and the family relocated to the US when Tebow was three.