What are the rules of football? There are lots of rules you need to know. We will cover the most important football rules to understand the sport. We break down the rules and how they divver from the NFL and college football. See the top 10 rules below:

What are the most important rules of football? 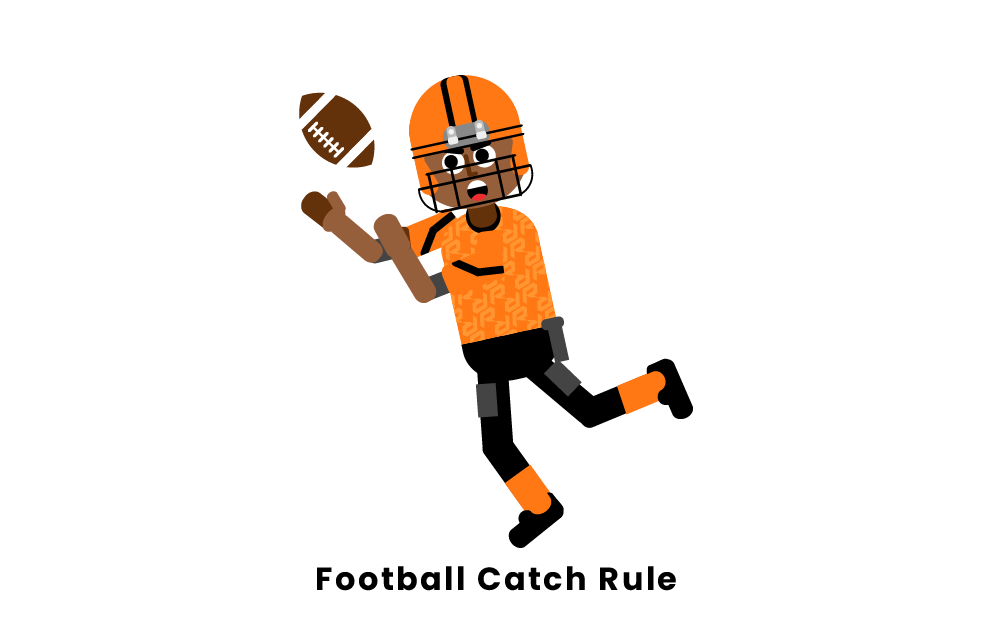 What is a catch? This exact question has been debated for years by fans, coaches, players, and officials. In the NFL, a catch is when a player has possession of the ball while having two feet in bounds or any body part other than the hands. The ball can not be dislodged or moved as a result of contact with the ground. A big point of emphasis from NFL officials is that a player must 'maintain possession through the entire process of the catch'. This means that a player must hang onto the ball when getting hit by a player or hitting the ground.

The college catch rule is the same in every regard apart from the feet in bounds. In college, receivers only need to have one foot in bounds while possessing the ball. 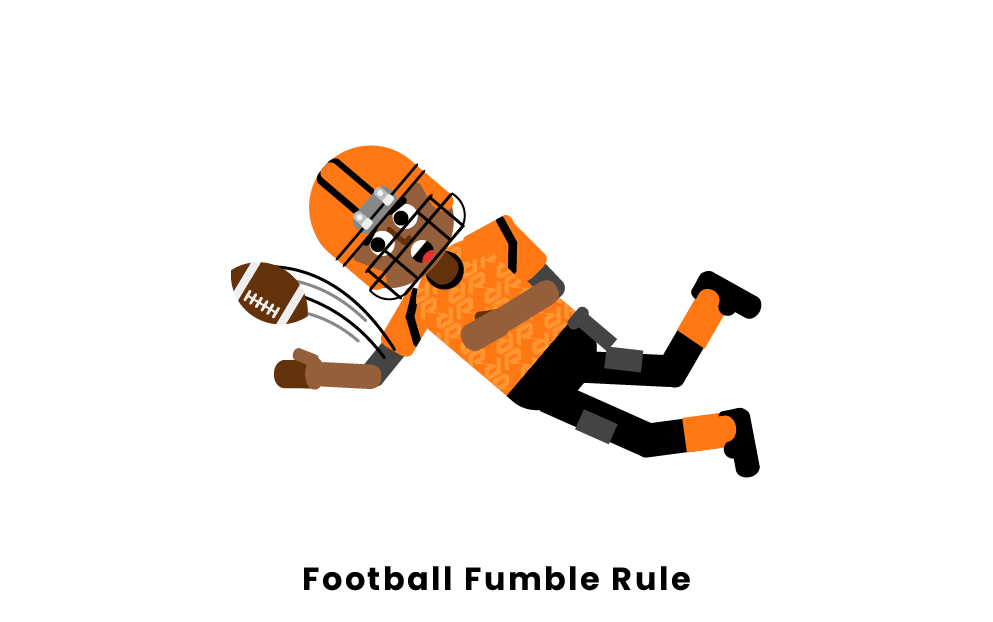 Overtime occurs when two teams are tied at the end of regulation. The NCAA and NFL have very different procedures for overtime.

When an NFL game ends regulation in a tie during the regular season, the two teams play a 10 minute overtime period. To decide who gets the ball first, there is a coin flip similar to the beginning of the game. If the team who receives the ball scores a touchdown on their first drive the game is over. If they do not score, the other team has the opportunity to win the game with any score. If the team who received the ball first scores a field goal, the other team has the opportunity to have a possession and tie the game with a field goal of their own, win the game with a touchdown, or lose if they fail to score any points. If each team possesses the ball and the score remains tied, the next team to score wins the game. If the score remains tied at the end of the overtime period, the game ends in a tie. In the playoffs however, they continue to another overtime period with the next score winning the game. In the event that the second team to have possession is down by a field goal in a playoff overtime game and the time runs out while they are still on their initial drive, they will continue to another overtime giving that team the opportunity to finish their drive.

When a college football game ends regulation in a tie, the two teams are each given a possession at the opponents 25 yard line. A coin toss determines who possesses the ball first and which side the teams will play on. If the score remains tied after the first overtime, they proceed to a second overtime with the same format. Following the end of the second overtime, teams who score a touchdown must go for a 2 point conversion. If the game remains tied for 4 overtime periods, teams will start from the opponents two yard line and have to run two point conversion plays until one team scores and the other does not. 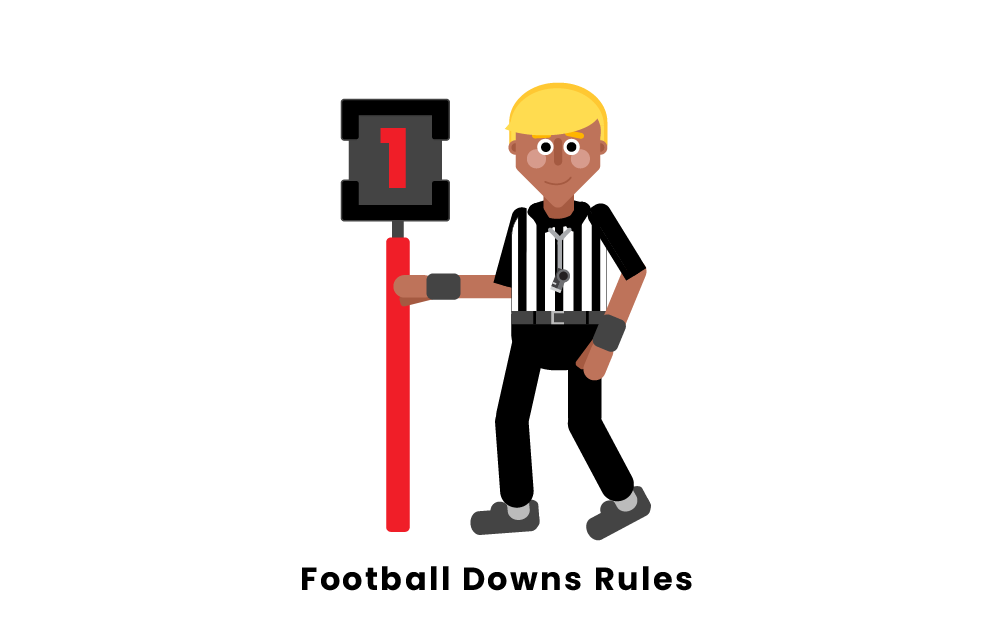 In football, offenses aim to score a touchdown every drive. Defenses aim to stop the offense from doing so. Down markers are imperative parts of football as they give the defense a chance to stop the offense without giving up points. If there were no downs system and the offense had every chance to score, it would be very challenging for the defense to get the ball back to their offense without giving up points. Therefore, every 10 yards on an NFL and college football field is a first down. From wherever the offense starts their drive, 10 yards from that spot is the first down marker. If a team fails to get the ball past the first down marker 4 times in a row, the other team takes over possession of the ball. If a measurement is very close, the referees come out with chains to measure if the ball crossed the first down line or not. 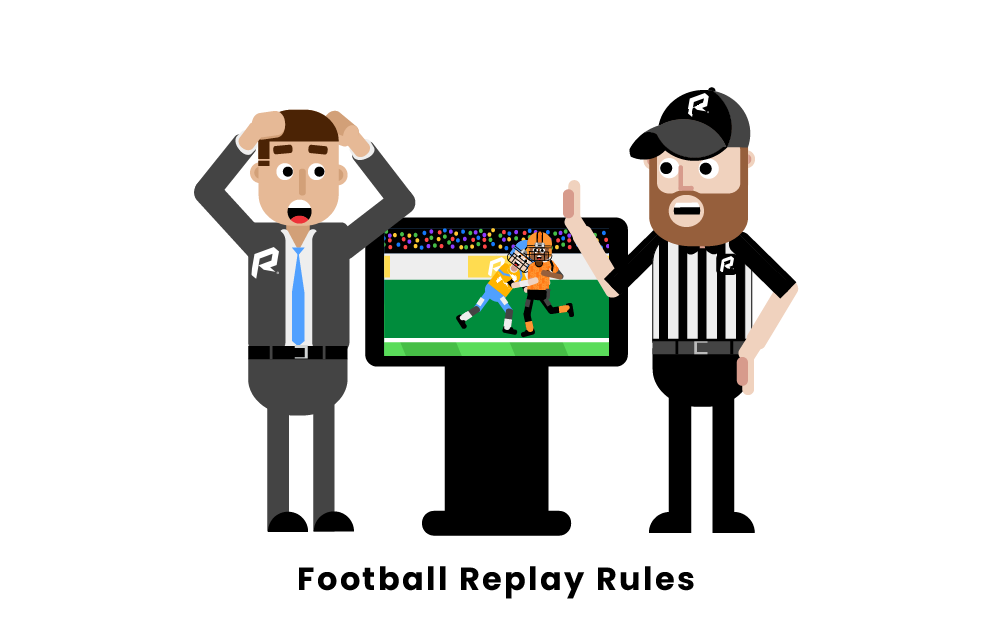 Replay has become more and more prevalent as the years have gone on in football. The importance of replay is to make sure the refs on the field are not missing anything or making mistakes. Until this year, penalties were not reviewable. As a result of a missed call in the NFC championship, pass interference is now reviewable. Other penalties still remain unreviewable. The most common plays reviewed are spot of the ball, catch v. no catch, fumble v. no fumble. Coaches are given two challenges each game in which they can use at any time apart from when there is less than two minutes in the 2nd quarter and 4th quarter.

Everything is reviewed by officials in a booth under the two minute warnings of the 2nd and 4th quarters. Regardless of whether the coach is correct on their first challenge, they have another challenge to use if they want. If a coach challenges twice and is incorrect both times however, he or she has no challenges for the remainder of the game. If a coach gets their second challenge right, he or she is awarded another challenge. A challenge is signaled by a coach throwing a red flag onto the field and discussing with the refs what they want them to review. If the play is deemed challengeable, the ref will proceed to look at replays and deem whether the call should be overturned. 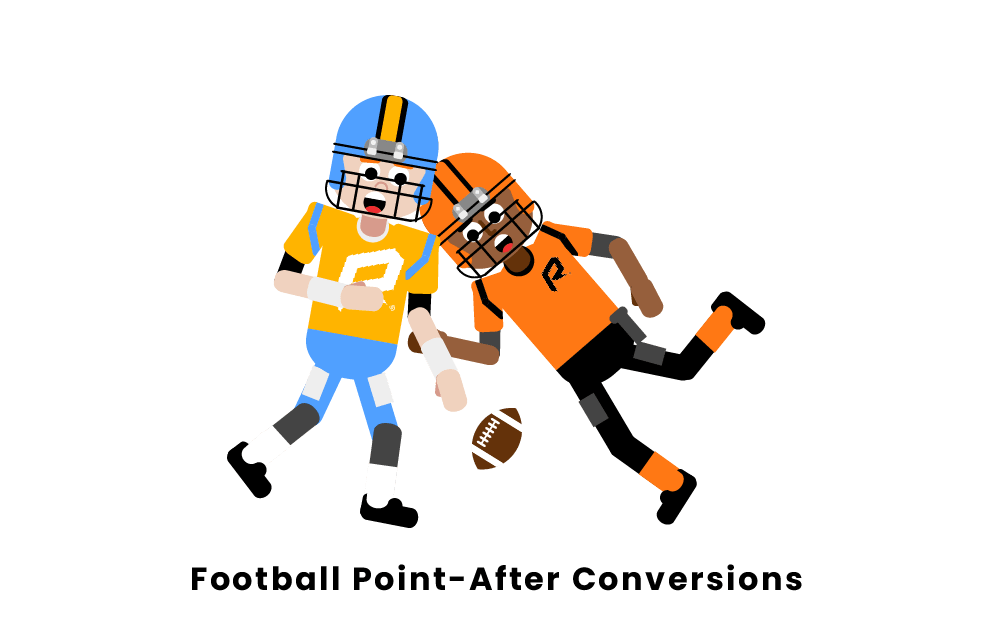 After a team scores a touchdown they have the option to attempt a two point conversion or kick an extra point known as a PAT (point after touchdown.) The more conventional option is the PAT. The point after is a field goal from the 15 yard line (making it a 32 yard field goal: end zones are 10 yards and the placeholder is 7 yards from the line of scrimmage). If kicked successfully through the uprights of the field goal goal posts the team is awarded 1 point. If teams decide to go for the two point conversion, they run an offensive play from the two yard line and attempt to get the ball into the endzone by either running or catching the ball in the boundaries of the endzone. If completed successfully, the team awarded two points. In the event an extra point is blocked, or a two point conversion results in an interception or a fumble, the other team can recover the ball and run with it across the field into the other end zone. If this occurs the team who returned the ball is awarded 2 points.

The same rules apply for the college football point after attempts and two point conversions apart from the distance of the extra point field goal. In college, kickers attempt the point after from the 3 yard line (making it a 20 yard field goal: endzones are 10 yards and the placeholder is 7 yards from the line of scrimmage). Placeholder is the terminology for the player receiving the snap and setting the ball up for the kicker to attempt the field goal.

A safety occurs when an offensive team is tackled in their own end zone or commits a holding penalty in their endzone. The result of a safety is the defensive team being awarded two points and receiving the ball immediately after from a free kick punt. Contrary to popular belief, it is possible for there to be a one point safety in football. Although extremely rare, (it has never happened in the NFL and only happened a few times in college football) it is possible. A one point safety occurs when a team is either attempting a two point conversion or kicking an extra point and the defensive team blocks, recovers a fumble, or intercepts a pass and proceeds to run back into their own end zone and get tackled by the team attempting the point after kick or two point conversion. The player must have recovered the fumble, intercepted the pass, or recovered the blocked kick outside of their own end zone before running back into their end zone for it to be a one point safety. 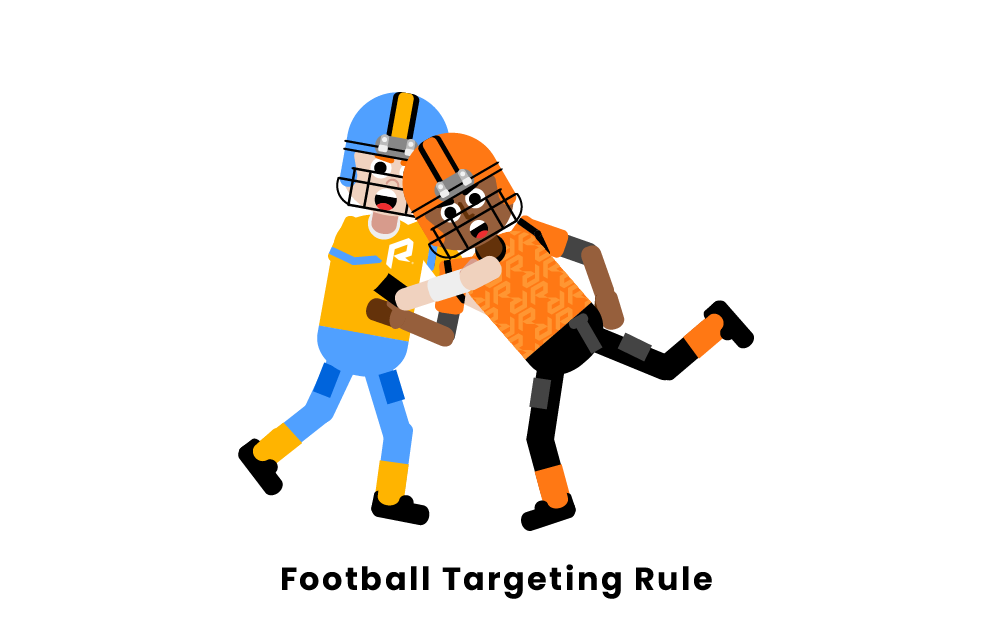 Football can be a very dangerous sport when players incorrectly tackle. The targeting rule was instilled to prevent players from suffering critical head and neck injuries as a result of another player tracking them incorrectly. The NFL and NCAA have similar definitions of targeting, but the NCAA bans two specific kinds of hits while the NFL only bans one. These penalties are personal fouls resulting in a loss or gain of 15 yards depending which team committed the offense. Additionally players are subject to ejection at both levels. NFL players can also face fines determined by the NFL front office.

If a player goes into a tackle or hit leading with the crown of their helmet they will receive a targeting penalty. 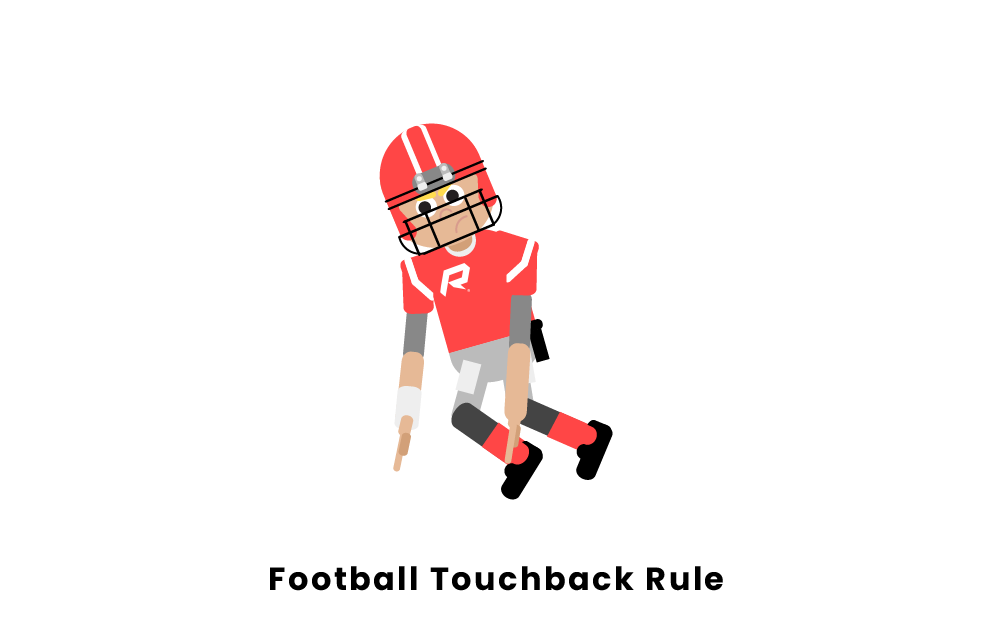 An onside kick occurs when a team decides to try and recover their own kick on a kickoff. In order to do so, the ball must travel 10 yards before being recovered or hit an opposing player. The kicking team is not allowed to have a running start and must wait until the ball is kicked to run past the yard line in which the ball is being kicked from. If the ball is kicked out of bounds, the kicking team receives a penalty and the receiving team takes possession of the football. Anyone including the kicker is eligible to recover the kick as long as the two rules stated above are followed. If a player runs past the ball before the ball is kicked an offsides penalty is called and the ball is moved back 5 yards for another kick.