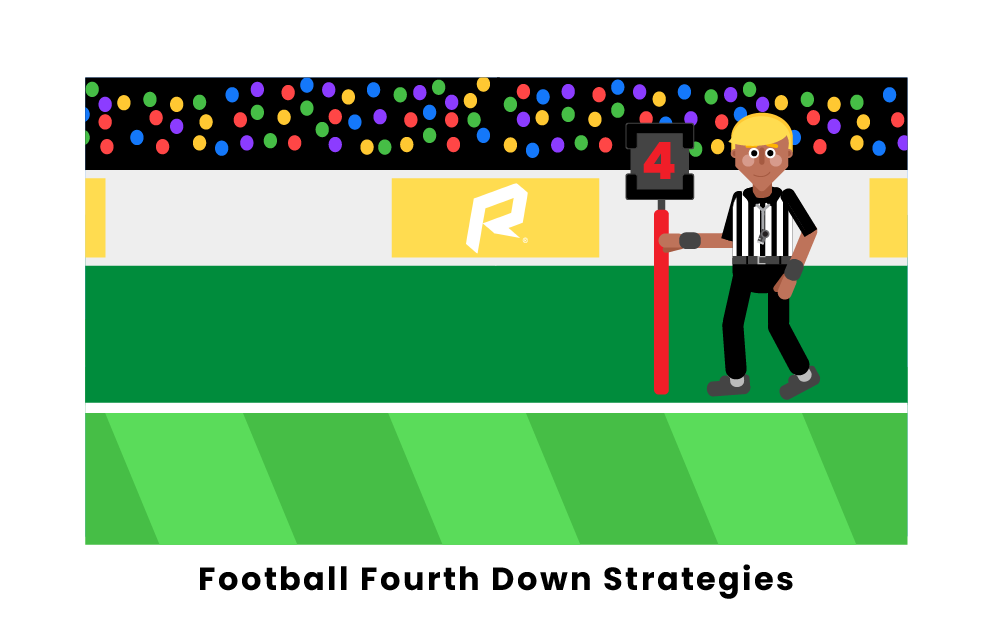 Football offenses have four downs to attempt to gain 10 yards, which would earn them a new set of downs so that they could continue to move down the field. If it is fourth down, that means a team was unsuccessful on their first three attempts. Teams have three main options on fourth down: to punt the ball away, to kick a field goal, or to go for the first down. They can also choose to run a trick play that involves disguising one of these options as another.

Punting on 4th Down

Punting is the most common option on fourth down. If a team is not within their kicker’s field goal range or is anywhere on their own half of the field, they will usually elect to punt on fourth down.

The likelihood of punting increases the more yards a team needs to get a first down. If the down and distance is fourth and two, they are more likely to go for it, but if penalties or loss of yardage pins an offense at fourth and 15, they are almost guaranteed to attempt a punt.

Field Goals on 4th Down

A team will usually opt to kick a field goal on fourth down if they are within field goal range and not in dire need of a touchdown. For most teams, field goal range is considered anywhere inside the 35-yard line, although an elite kicker’s field goal range can extend even further. The risk with attempting a long field goal is that a miss results in excellent field position for the opposing team.

When inside the 10 yard-line, field goals are almost guaranteed three points, but coaches will sometimes elect to go for it since they are so close. Fake field goals are very rarely utilized, but are an option on fourth down to attempt to pick up a first down.

Going for It on 4th Down

The phrase “going for it” on fourth down means that a team chooses to run another play instead of punting or kicking a field goal. This option comes with the risk of turning the ball over on downs if their attempt does not successfully reach the first down marker. Attempting another play on fourth down is the most exciting option, since a conversion continues the drive while a failed play results in a turnover at that spot of the field. Teams are unlikely to go for it unless they only need a short amount of yardage to gain a first down, and the ball is in the opposing team’s half of the field. If it is fourth and inches, then teams will often opt for a QB sneak since the yardage needed for a first down is so small.

Depending on the situation, most teams will go for it when they are very close to scoring a touchdown since seven points are significantly more valuable than three. Coaches decide to go for it on fourth down more frequently in the final minutes of a game, when their team needs a touchdown to tie or win the game.

Trick Play on 4th Down

Trick plays on fourth down usually involve a team running a fake punt or field goal. Teams occasionally line up in a punt formation just to end up going for it. These fake punts can either be throws or runs, and their success comes from the element of surprise.

Teams will occasionally line up on fourth down to appear like they are going for it, but instead of running a play, they call a timeout as the play clock expires and send out the punt team. This strategy aims to draw the opposing defense offsides, resulting in enough penalty yardage to give them a first down.

What does it mean when a team “goes for it” on fourth down?

Should you always “go for it” on fourth down?

Why do teams kick the ball on fourth down?

When teams are within field goal range, they will normally take the three points awarded for a field goal on fourth down. When they are outside of field goal range, teams typically opt to punt the football. The decision to kick on fourth down is mainly based on a team’s positioning on the field and how many yards they need to get a first down. Punting is the safest choice for teams in their own half of the field, as they don’t want to risk a turnover on downs that will give the other team a better starting position on their drive. To avoid this, teams will punt the ball to start the opposing offense at a less-advantageous spot on the field.