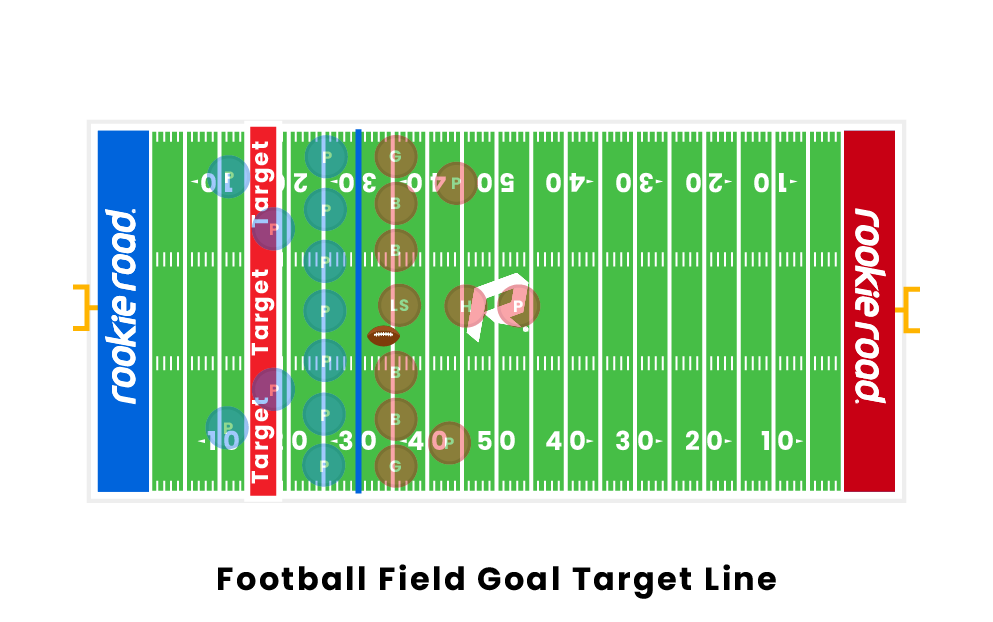 What is the Field Goal Target Line?

The field goal target line in football is a line that appears on television (like the yellow first down line or the line of scrimmage line) to mark a kicker’s kicking range. It usually appears as a thick red line with the words, target, or field goal range inside the line. The line is superimposed and does not show on the actual football field.

The field goal target line usually appears in the fourth quarter or during overtime when a team is driving down the field to win or tie the game.

For example, if a team gets the ball with one minute left, needing a score to break a tie game, the field goal target line will appear to mark the range of the field goal kicker. This line represents the spot on the field that the offense must reach to give the kicker a reasonable shot at making the kick and scoring three points.

The field goal target line provides the audience with a visual representation of how many yards the offense needs to have a realistic chance of scoring a field goal, usually with the game’s outcome at stake. The line takes into consideration the seven yards that the kicker lines up behind the line of scrimmage, as well as the kicker’s range. Some kickers tend to kick the ball farther than others, which results in the offense needing fewer yards to reach the target line. To calculate the total distance of a field goal attempt, simply add 17 yards (American football) or 7 yards (Canadian football) to the yard line at the line of scrimmage.

Players and fans that are at the stadium cannot see the field goal target line, as it is merely a feature that is added on to a TV broadcast. Therefore, teams must know their kicker’s range and make an educated decision on when to kick a field goal. Since those responsible for creating TV broadcasts are not able to speak with the kicker directly, they often use a combination of kicker statistics to determine where to place the field goal target line.

These statistics include the kicker’s longest career field goal and average distance traveled on each field goal attempt. The weather and field conditions also have a role in the kicker’s range on a given day. If the wind is blowing against the kick, the range is shortened. Rain, snow, sleet, and even hot days all have an effect on how far the ball will travel.

History of the Target Line

Unlike the first down line, introduced in 1998, the field goal target line is relatively new, introduced during the 2005 NFL season. The visual-aid lines that began appearing in football near the end of the 20th century came under much scrutiny for retelling what is already known. However, it’s hard to imagine a football game today without those aids on the field.

The longest kick in football history is a 69-yard kick from Ove Johansson in 1976. The game was between Abilene Christian University and East Texas State (now known as Texas A&M), both part of the NAIA (National Association of Intercollegiate Athletics) at the time. The longest kick in NFL history belongs to Justin Tucker when he drilled a 66-yard kick in 2021. The longest kick in the NCAA is 67 yards, a mark achieved by three kickers: Russell Erxleben, Steve Little, and Joe Williams. All three achieved this mark in the 1977-1978 NCAA season. The CFL record is a 62-yard kick, held by Paul McCallum.

What is the field goal target line?

How far is the field goal target line?

When is the field goal target line shown on TV?

The field goal target line is shown on TV during the end of the second or fourth quarter and the entire overtime period when the team in possession of the ball is driving down the field with the potential of scoring a game-deciding field goal. It is used during times when a field goal is the primary goal of the offensive team.