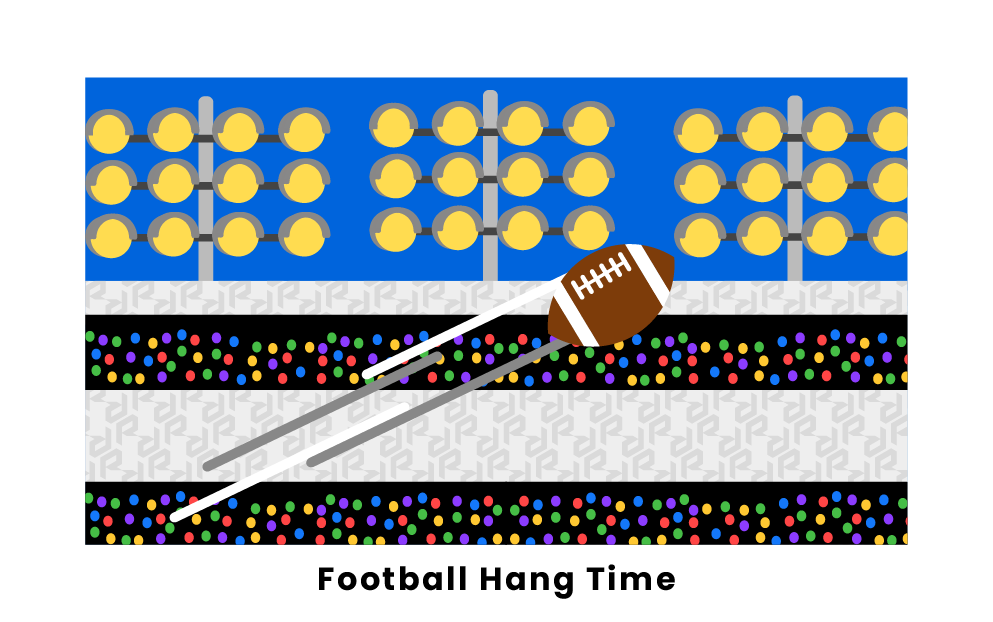 Hang time is how long the football remains airborne after a punt or a kickoff.

When discussing hang time, punts are the usual focus. Punters are judged and chosen partly because of how long they can keep the ball in the air. A line drive 60-yard punt that is returned for 25 yards is much less sought out than a punter that can loft a ball 45 yards resulting in no return. Talented punters can reach well over five seconds of hang time. The average hang time for a punt in the NFL is 4.4 seconds. Over the season, leading NFL punters will maintain an average hang time of around 4.8 seconds.

Kickoffs are generally more focused on distance and receive slightly less hangtime than punts. Hangtime is also not recorded as a primary stat during kickoffs as it is with punts, despite it being a valuable tool. Kickoffs that remain in the air for longer allow the coverage teams to get down the field and tackle the return man before they get too far. A good kickoff hangtime in the NFL is above the average of 4.4 seconds, with the leaders being around 4.7 seconds. College and other football league players average slightly less, but still above four seconds.

Why is Hang Time Important?

Hang time is valuable for the kicking team because it directly correlates to the kicking team’s ability to stop kick returns. The longer a ball hangs in the air after a kick, the longer the players on the kicking team have to run down the field and cover the kick returner. If a punt or kickoff is too short or travels its distance without much hang time, the returner will catch it with the field being wide open, as the covering players have not had the opportunity to reach him yet. This can lead to long kick returns, which can negate any distance the kick might have had.

Launch angle is extremely important in generating as much hang time as possible. A lower launch angle means a line drive or a kick that will go far and not high. A higher launch angle will not travel as far but will remain in the air for longer. In deciding between punting the ball far and generating hang time, it is important to find a medium.

One strategy punters use to balance the two is to have their distance be less than 10 times their hang time. For example, a punt that goes 45 yards should have a hang time of at least 4.5 seconds.