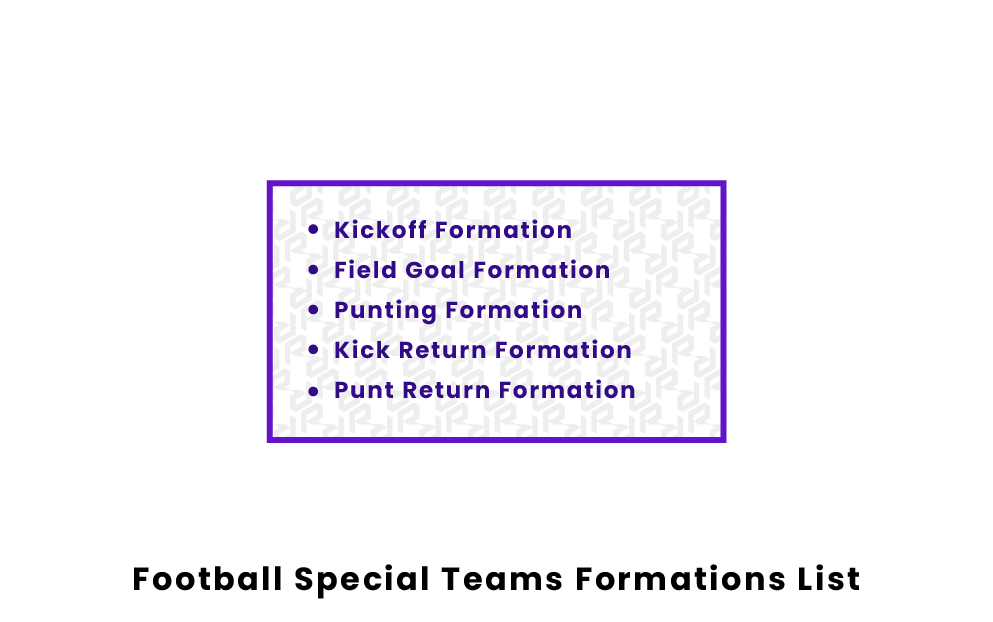 Often forgotten, the work of the special teams unit is crucial for a football team. The margin of error of each unit, whether it is on the offense side or the receiving one, is extremely narrow, and any mistake could end up being game-deciding. Let’s now take a look at the five special teams formations in football!

The kickoff formation, which includes the kicker and 10 offensive players, is the first special team unit to be fielded by the side that kicks off at the beginning of each half, or at the start of overtime. The scoring team also has to send out this formation after each scoring play, whether it is a field goal or a touchdown.

Following the latest rule update by the NFL, five players have to line up on both sides of the ball, with the kicker being the only player that is not required to be lined up within one yard from the restraining line. The kicker lines up further back so they can get a running start when they kick the ball, giving their kick more power and distance.

While they might not be considered the most spectacular situations of a football game, field goals and extra points often end up being decisive in terms of scoring. This is why the work of the special team units sent on the field has to be impeccable on either side of the ball.

The kicking team unit for field goals and extra points consists of nine offensive linemen, including two tight ends; the holder, who is lined up seven yards away from the offensive line and on the side of kicker’s strong foot; and the kicker, who lines up a few feet back from the holder. While most times, these formations execute a kick, on special occasions they could run a fake kick play where either the holder or the kicker turn into a passer. If a successful fake play is run on an extra point attempt, the extra point is worth two points, while if it is run successfully during a standard field goal, it can secure a first down or touchdown.

The head coach and the special teams coordinator elect to punt when the team fails to reach a first down within the allotted tries, and the offense is too far away from the end zone to be in range for a field goal.

The punting formation features five offensive lineman (the center, left and right guards, and left and right tackles), two gunners, and three upbacks, who give extra protection while lined up three yards behind the offensive line. The punter is lined up 15 yards behind the center, who snaps the ball that entire distance directly to them. In case of a fake punt, in which the punter chooses to pass or hand off the ball instead of kicking it, the upbacks and gunners can turn into receivers or runners based on the play call.

The kick return formation is sent onto the field by the receiving team during each kickoff, field goal, or extra point situation. However, the lineup changes based on each case.

In the case of kickoff return, the receiving team is arrayed in three lines, with five blockers inside the 45-yard line, four to five blockers between the 30 and 25-yard lines, and one or two receivers near their own goal line.

In the case of a field goal return, there are two lines, the first with the defensive linemen and the second with special teamers and cornerbacks ready to deflect the kick. There could also be a returner lined up by the goal line in the case of a long range field goal.

The receiving team on a punting return situation lines up following a man-to-man scheme. Seven defensive lineman line up against the offensive line, while two cornerbacks cover the gunners and a linebacker protects the punt returner.