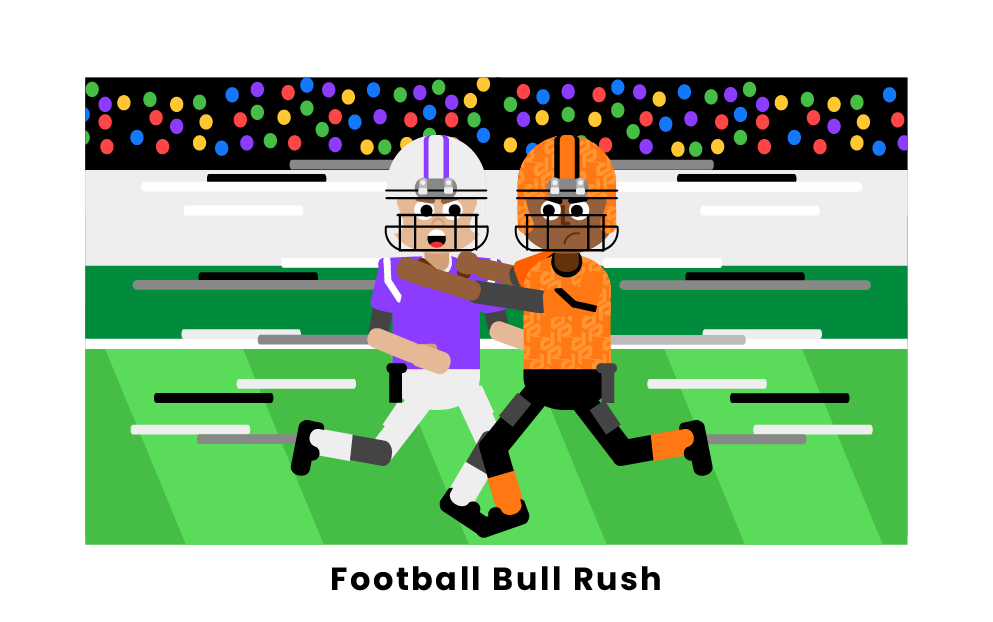 A bull rush is one of many approaches or techniques a defensive player can use for their benefit. Read more to find out what a bull rush is, as well as how to perform one.

What Is a Bull Rush in Football?

A bull rush in football is a technique used by pass rushers, including linemen and sometimes defensive ends, to beat blockers protecting the quarterback. The bull rush is an approach that relies on raw power, as opposed to other pass-rushing techniques that make more use of quick hands and deft footwork.

How to Perform a Bull Rush

To perform a bull rush, a defender will make hard initial contact with an offensive lineman using both hands and attempt to drive them backward. Next, the defender will attempt to gain control, slip by the lineman, and tackle the quarterback.

The bull rush technique requires the pass rusher first to get lower than their opponent to create leverage. Then, they must shoot their hands into the chest of the offensive lineman, doing their best to keep them on the inside of their opponent’s frame with their arms extended. When using this technique, the defender should make sure they have a solid base with their knees bent and their body forward. Their feet should constantly be moving as well.

Why Should You Use a Bull Rush?

You should use a bull rush to show defensive strength and demoralize the offense. The bull rush is effective when used by defensive linemen as other pass rushers surround the pocket. With an offensive lineman being pushed right at them, ideally, the quarterback will have nowhere else to go.

After the pass rusher has pushed the blocker back far enough, the pass rusher can use another technique, such as the swim move or rip move, in order to actually reach the quarterback. At this point, the passer can be sacked or at least further pressured.

How do you beat a bull rush?

When facing a bull rush, a blocker should do a few things to effectively defend against it. First, they should set their feet in order to hold their ground. They should also keep their arms bent slightly, so they remain strong enough to hold off the pass rusher. Finally, they should refrain from bending their knees at a 90-degree angle or greater, so they are not thrown off balance.

Is a bull rush effective?

A bull rush can be effective, but only if the defender has a significant physical advantage or the offensive tackle is inexperienced. An experienced tackle will know how to properly set their feet and defend against a bull rush, so they are most effective if the defender is much bigger or stronger. However, if an inexperienced tackle cannot properly defend a bull rush, the technique can be effective at gaining control and breaking through the line.

What players are part of a bull rush?

Defensive linemen and tackles are the primary players involved in a bull rush. Typically, these linemen will need to be larger and stronger than other defenders in order to make the bull rush more effective. Their strength allows them to muscle their way through the offensive line, making the bull rush a crucial defensive tactic for powerful linemen to employ in a play.