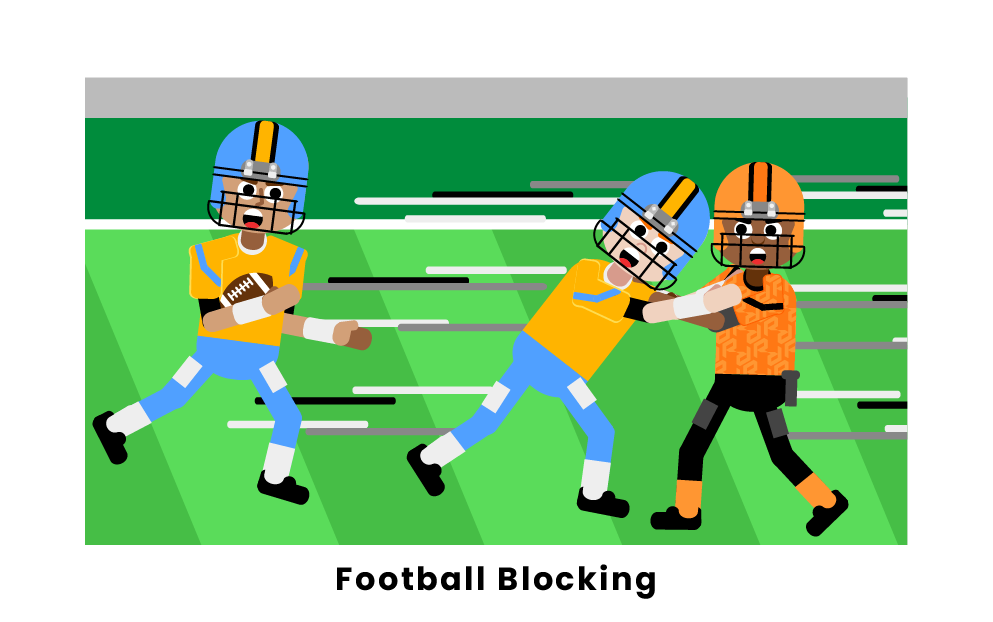 What is Blocking in Football?

Blocking is a technique in which an offensive player uses their body to obstruct the path of a defender. Blocking in football is also a part of special teams plays. A blocker will do their best to hinder a defender’s path to the passer or ball carrier, depending on the play. Blockers do this by creating contact that will prevent the defensive player from moving towards the player with the ball, preventing a tackle.

Blocking requires proper form. To execute a block, a blocker first sets their stance, with feet shoulder width apart, hands ready at their waist, shoulders back, and head up. Then, as soon as the snap is made, they take an explosive first step toward the defender known as the get off. Next, the blocker will strike, taking a second step and initiating the block with their outstretched arms, contacting the defender in their chest. Finally they finish the block by lowering their waist, keeping a wide base, and controlling the defender with their arms.

The NFL rulebook states that blockers may use their entire body unless restricted by a rule. As such, legal blocking may include the use of the head and shoulders as well as hands and the outside of the forearms.

Blocking techniques that result in a penalty include contact at or above the neck area with the hands, a block to the back, and material restrictions.

Other illegal blocking techniques include clipping, illegal crackback blocks, chop blocks, illegal “peel back” blocks, and blocks below the waist on kicks and changes of possession. In some situations, however, certain techniques are legal, such as the “peel back” block, which is legal when the blocker hits the frontside of the defensive player.

Below is a list of the types of penalties that are related to blocking in football:

A number of different blocking strategies exist that may give a blocker an advantage over his opponent, whether it be a more isolated approach or a team effort. Here are some of the most popular types of blocks:

Running backs, fullbacks, wide receivers, and tight ends are also all capable of throwing blocks to either help the ball carrier or protect the quarterback, though it is not their primary responsibility.

In special teams play, there are a number of players they may block as well. The long snapper, for example, becomes a blocker for the kicker or punter. The upback is a special position that also protects the punter by blocking. On a return, a number of players help to block for a kickoff or punt returner.

What is blocking in football?

In football, blocking is a technique in which offensive players physically impede defenders from tackling the ball carrier or quarterback. Blocking is a crucial offensive skill, as without it, many offensive plays would end without gains or progress down the field. A good blocking offense can easily open up scoring opportunities for their ball carriers.

What does a block do for the ball carrier?

What was the best blocking offense in NFL history?

The question of which offensive line in NFL history was best at blocking is hard to answer, and subject to much debate. However, one team which deserves recognition for their offensive skills are the 1995-1999 Denver Broncos, led by legendary coach Mike Shananhan. Shanahan’s Broncos led the league in rushing ability throughout the late 1990s as a result of their ability to protect quarterback John Elway, which helped them win two back-to-back Super Bowls (Super Bowl XXXII and XXXIII). Other well-renowned offensive lines in NFL history include the 2001-2006 Kansas City Chiefs, the present-day Dallas Cowboys, the 1958-1967 Cleveland Browns, and the 1970s Miami Dolphins.