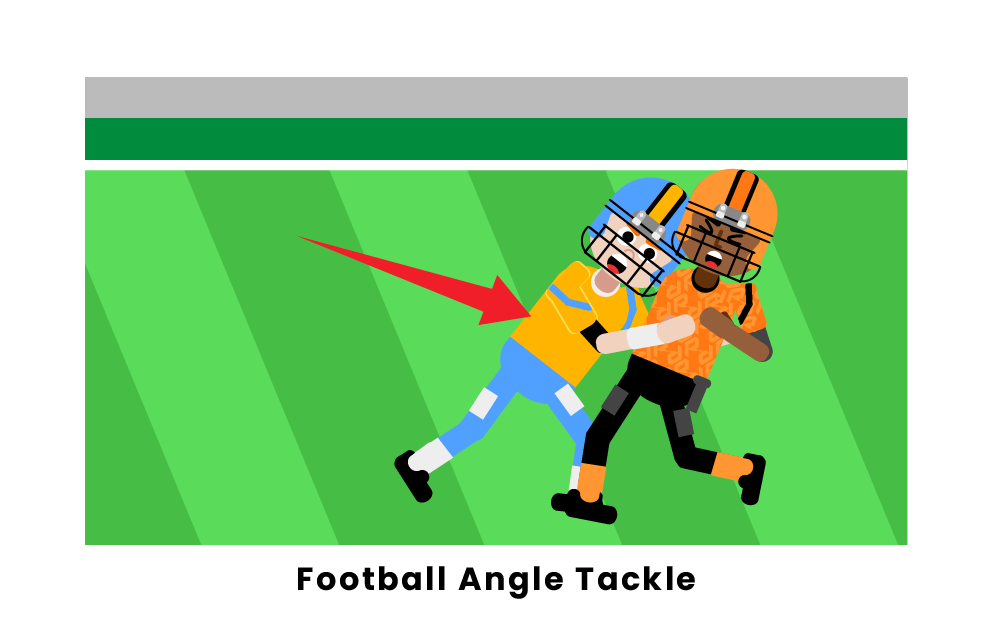 What is an Angle Tackle in Football?

An angle tackle is when a defender contacts the ball carrier at an angle. During the game, players are always moving, making angle tackling an essential technique. In order for a defender to stop a moving ball carrier, they must ensure that they are coming at the right angle and using the proper tackling techniques.

How to Perform an Angle Tackle

An angle tackle is performed similarly to a frontal tackle, except the defender attacks at an angle. There are several steps a defender must take to ensure they perform a successful angle tackle. They must keep their body low to the ground and wrap up the ball carrier with their helmet across the offensive player’s chest. They should keep their head in front of the runner to prevent serious neck or head injury. The wrap-up should take place at the ball carrier’s waist. Once their opponent is wrapped up, it is important to lift them as much as they can and chop their feet. When the defender feels they have enough leverage, they can finish the play and bring the runner to the ground.

There are several drills designed to specifically work on this technique, but they all have the same concept. These drills can be done at walking speed, thump speed (wrap-up but no tackle), and full speed. In order to set it up, you need two parallel lines: one for defenders and one for ball carriers. Have a cone set up 5-10 yards downfield, in the middle of the two lines, to be used as a meeting point where the tackle is to be made. When the whistle is blown, have the defenders tackle the offensive player at an angle, making sure that the player is using proper techniques. It is always important to know how to tackle safely. Drills like these are still practiced at the highest levels.