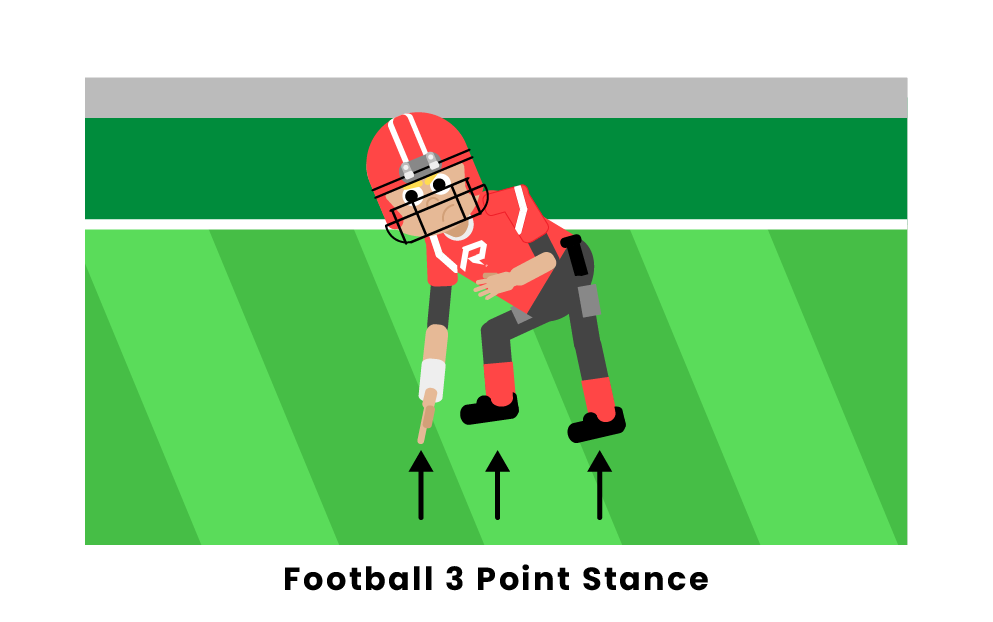 What is a 3 Point Stance in Football?

The three point stance in football is a technique used by offensive linemen, defensive linemen, and running backs, in which their two feet and one hand are touching the ground. Football players use different stances to better position themselves for game situations; the stance they use is also largely based on what position they’re playing.

Offensive and defensive linemen most commonly use the three point stance because it allows them to gain more power from their legs, stay low to move in either direction, and also get a quick and explosive start. While the three point stance is one of the most effective and popular stances for linemen, players are free to use other stances and may switch between various stances throughout the game. The stance is especially important for offensive players because they are required to stand completely still before the ball is snapped, or else they face a false start penalty.

Proper technique is important when utilizing a three point stance in a football game. Players should have two feet on the ground, about shoulder width apart. Some players will stagger their feet for extra balance and a quicker start in accordance with their position on the field and the positioning of the opposing team. Next, bend down to nearly a deep squatting position and place the fingertips of a single hand on the ground for stability.

Offensive linemen want to put little pressure on the hand touching the ground in order to maintain balance and to not be easily knocked over by the defense. Defensive linemen want to lean into their stance a bit more in order to explode towards the offense at the snap of the ball. Face forward towards the line of scrimmage, lift your head up, and pull your shoulder blades back to widen the chest area.

Weight should be centered and you should be balanced with your knees bent. Rest your other hand on your thigh, but make sure to be ready to get your hands up quickly in preparation for blocking. Remember to keep your eyes up to scan the field and avoid helmet to helmet contact. If properly executed, players should have flat backs and be in a strong position so that they are not easily moved or pushed over.

What is a 3 point stance in football?

In football, a 3 point stance is a technique in which a player touches the ground with their two feet and one hand. This stance is typically used by offensive linemen, defensive linemen, and running backs so that they can have an explosive start but also use their hand to keep balanced until play begins.

What are the advantages of a 3 point stance?

The main advantages of a 3 point stance are immense power and speed. Because of the three points of contact, a player can draw power from their legs, stay low, and explode forward as soon as the ball is snapped by the center. For these reasons, a 3 point stance is one of the most popular and effective stances that a player can use.

What are the disadvantages of a 3 point stance?

The main disadvantage of a 3 point stance is that it’s more dangerous than other stances. Because of how low it drops the body of a player using this technique, helmet contact is much more likely. A player in a 3 point stance is also only balancing one hand and is thus more vulnerable even though he has a better chance at an explosive start.