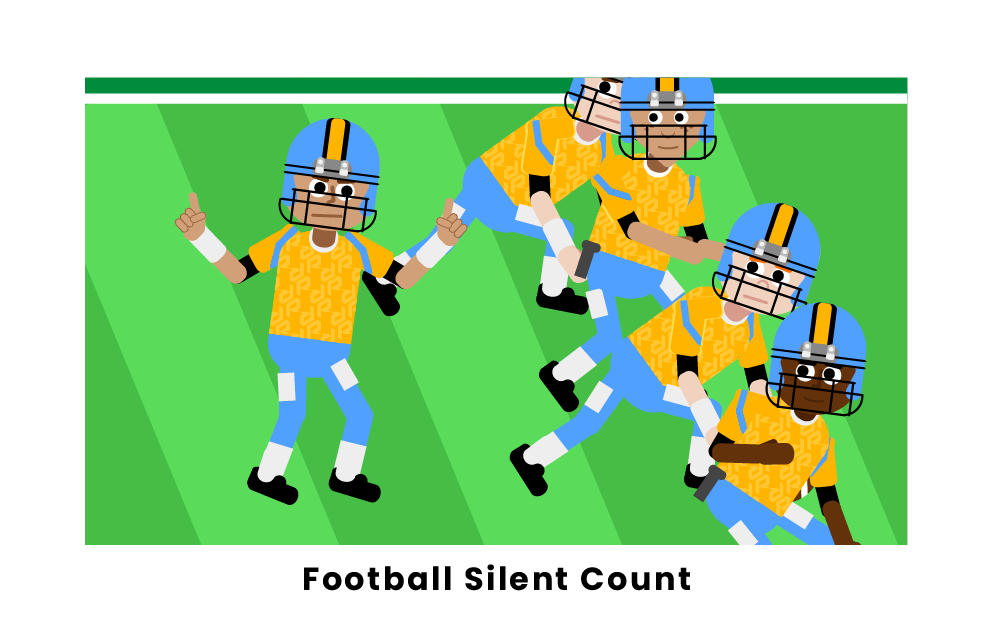 What is a Count in Football?

A count in football is a system that indicates when the ball will be hiked to the quarterback, officially starting the play. Counts, or cadences, are used to keep members of the offense on the same page while keeping the defense off guard. They are initiated by the quarterback, who yells out a series of phrases before arriving at the one that indicates the ball should be hiked.

What Is a Silent Count in Football?

Silent counts involve no cadence being uttered by the quarterback at all. Instead, the quarterback will say nothing and use subtle hand motions to indicate to the center that the ball should be hiked. Silent counts are a great way to gain an advantage over the defense, as they tend to take defenders by surprise, causing them to be slower off the line of scrimmage.

When Should You Use a Silent Count?

Silent counts are generally reserved for short-yardage situations in which the offense needs only a few yards to secure a first down and maintain possession of the ball. When only a few yards are needed, it is nearly impossible for the defense to recover fast enough to prevent the offense from reaching the first down marker. However, quarterbacks are often forced to use a silent count in a loud stadium on the road. For this reason, all offensive players must be ready to revert to a silent count.

The traditional and most common cadence called out by the quarterback is, “ready...set...hut.” The “ready” portion allows the offensive players to ensure they are in the correct spot, while the “set” phase gives them time to get into the proper position. Offensive lineman line up in a forward-leaning squat with one hand on the ground for balance, while wide receivers begin in a fairly upright, split-legged stance. For a traditional cadence, otherwise known as “going on one,” once the quarterback says the word “hut,” the ball is snapped, and the play begins.

What Is a Hard Count in Football?

Hard counts are the opposite of a silent count, and take advantage of overeager players on the opposing defense. In a hard count, the quarterback will begin with the traditional cadence, but the he’ll yell out, ‘Hut’ multiple times, doing so emphatically in order to convince the defense that the ball is about to snap and cause a defender to lunge over the line of scrimmage before the play has actually begun. This will result in the defense being assessed an offside or encroachment penalty, and the offense gets to begin the play five yards further into the defense’s territory.

One drawback of using a hard count is that it can also fool the offensive players. Players that forget a hard count was called in the huddle are susceptible to moving before the center hikes the ball, at which point the offense is handed a false start penalty and forced to back up five yards.