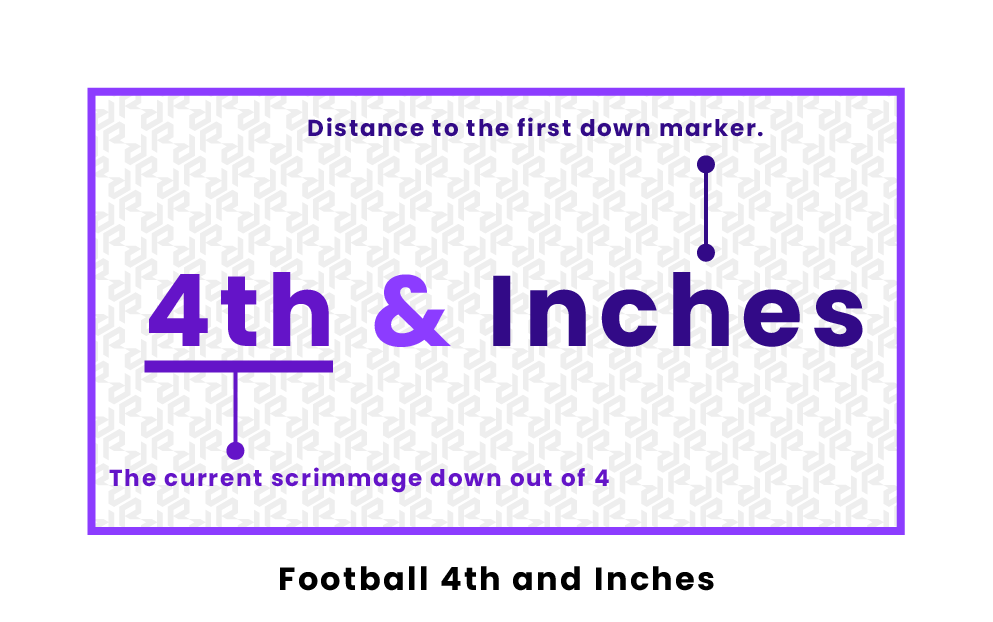 What is 4th and Inches in Football?

When a football team reaches fourth down, it is typical for the offensive team to punt or, if close enough, attempt to make a field goal. However, 4th and inches can often call for the offense to try for a first down, since there is only less than a foot between the line of scrimmage and the first down line.

Let's look at the three options the offense has to choose from on 4th and inches:

On 4th and inches, the offense can elect to punt the ball, just as they would on 4th and 10. This is the safest play option and is typical of a team far into their half of the field. If a team does not want to take a risk in the game, or does not need to take a risk, this would be the best option for them.

If the offense is within field goal range on 4th and inches, they may elect to kick a field goal and obtain 3 points. This is the most common option for teams not looking to take much of a risk on their play call, especially if they are in close field goal range. However, if the offense misses the kick, the opposing team will get the ball from their line of scrimmage on first down.

If a team elects to go for it on 4th and inches, they are attempting to get a first down and continue with their offensive drive. Teams who choose to go for it typically run a short run play or have the quarterback attempt to put the ball over the first down line on his own. Running plays are less risky and more successful than throwing plays in this situation. Offenses in the NFL convert 4th and inches at a success rate of as much as 75%!

Teams will most often go for it on 4th and inches in a close game or toward the end of the game, as it is the riskiest of the options available to them with the highest possible reward. If the team does not achieve the first down, the opposing team will get the ball from wherever the play ends up stopping.

The Defense on 4th and Inches

If the offense elects to go for it on 4th and inches, the defense has to be prepared to stop them from reaching a first down. Most defenses will prepare for a run play, especially down the middle of the field, but will be prepared for any of the quarterback's audibles. More often than not, the offense will convert on 4th and inches, but a well-prepared defense can stop a large yardage gain from happening.