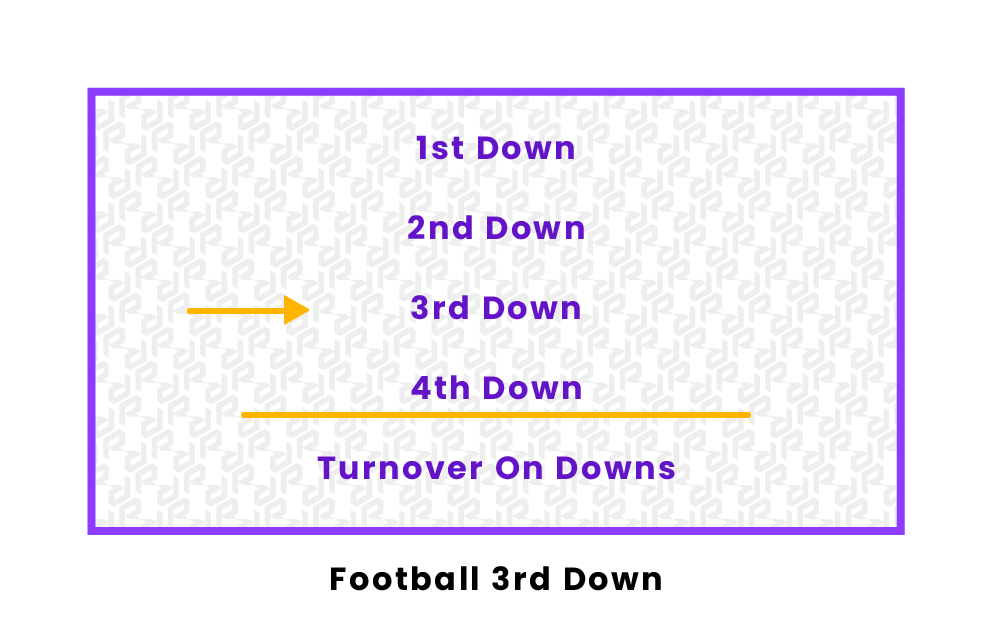 In football, one of the most commonly-feared circumstances for an offense is to hear the words “third down.” A third down is an almost-universal sign of pressure for a football team, as it indicates a scenario in which an offense needs to gain the ten yards required for a first down, and thus another four plays with the ball. Third down is when many offenses need to use their best plays to keep the game alive, and below, we will discuss why this down is one of the most crucial parts of a football game.

What is a Third Down in Football?

A game of football has cycles of four downs where a team has to travel a distance of 10 yards towards the end zone. A third down is the team’s third chance out of four at maximum to travel those 10 yards. If a team gets to a third down, it means that it has failed to travel the 10 yards in the first and second downs combined. A third-down situation puts the attacking team under some pressure because, most of the time, if a team fails to meet the remaining distance in the third down, the ball is punted away to the opponent, or a field goal kick is attempted. Fourth-down plays are rather risky, as failure to reach the first down marker will result in a turnover at the spot where the play ends.

You may hear expressions such as “Third and 6.” That means that the attacking team is at its third attempt of traveling 10 yards (its third down) and still has to travel six more yards, as it traveled a total of four yards in the first and second downs combined. You may also hear “Third and 15.” A team can also travel backward on the field as a result of penalties, sacks, or other mistakes. In the example case, the attacking team traveled five yards back in the two previous downs combined, so it needs to advance 15 yards on its third down.

Third down is the next-to-last down of the down cycle before fourth down. For most teams in a standard game, third down is the final down you get to run a play because most teams punt the football to the other team on fourth down. In “third and long” scenarios (situations where the first-down line is ten or more yards away), passing is imperative unless you’re trying to fool the defense by running the ball. In “third and short” situations (situations where the first-down line is less than three yards away), running and passing are both viable options for the offense.

What does third down and goal mean in football?

Third down and goal, also referred to as “third and goal,” means that a team must reach the end zone instead of getting a first down. Whenever a team gains a first down inside of the 10-yard line, they have four plays to reach the end zone or kick a field goal. Failure to do so will result in a turnover to the other team. In many cases, third and goal is the last chance in the drive for a team to score a touchdown. In cases where the offense is down by a lot or inside the five-yard line, they may decide to go for it on fourth down as well.

What is a third-down back in football?

Do teams ever punt on third down?

Teams will typically never punt on third down, as it would be a waste of a down and give the opposing offense the ball back prematurely. However, there have been a few rare instances in which a team punted on third down due to unusual circumstances. Perhaps most notably, Penn State punted on third down in a game against Auburn during the 2021 college football season. This laughable occurrence took place because game officials accidentally labeled second down as third down, meaning the next play was labeled as fourth down even though it was only third down.

What is a down in football?

According to the NFL rulebook, a down is a period of action that starts with the snapping of the ball and ends with the ball being declared dead. When a team is on offense, they get a series of four downs during which they must advance the ball at least 10 yards down the field toward their opponent’s end zone. If they fail to advance the ball the required 10 yards, possession will pass to the opposing team.

Pages Related to Football 3rd Down