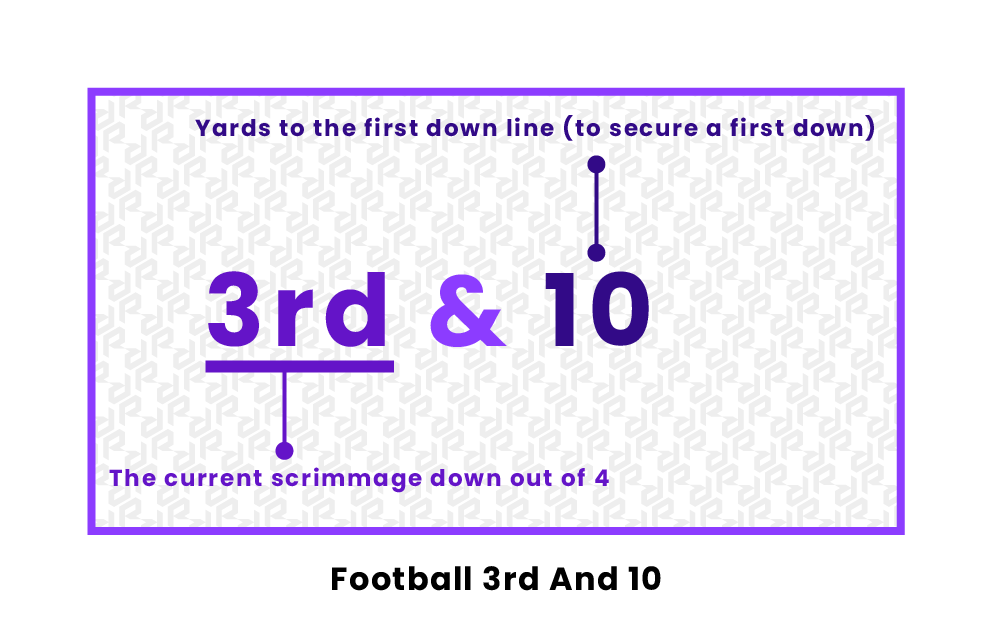 Third refers to the down, meaning that particular play is the third in a set of downs. Ten refers to the distance in yards the offense needs to travel to earn a first down. Because most, if not all run plays are only designed to gain three to five yards at a time, run plays are rarely chosen over pass plays for 3rd and 10, making the offense’s play call more predictable to the defense.

Third and ten is a common down and distance scenario that can arise from many situations, but mainly it occurs when an offense either suffers from two incomplete passes or gains positive yardage and then loses yardage due to a penalty.

This scenario is considered a pivotal moment in an offensive drive, because if the offense fails to gain a first down, then they will be in a fourth down situation and likely be forced to punt or kick a field goal, effectively ending their drive with a lower score, if even a score at all, than that of a touchdown.

Offensive Strategy for 3rd and 10

Passing Plays on 3rd and 10

Many 3rd and 10 play designs will feature a motion at the beginning of the play. This helps to discern the defense’s coverage. It also allows the quarterback to make key inferences about which receivers will be open.

Once the ball is snapped receivers will often run a shallow route, such as an in route, and a deep route, such as a wheel, a post, or a corner. Another common occurrence in 3rd and 10 play design involves imploring crossing routes, such as having a wide receiver run a slant and the slot receiver to run a wheel route. This serves to confuse the defense, ultimately creating an open receiver.

Running Plays on 3rd and 10

Run plays are not favored in 3rd and 10 situations. Even the best running backs in NFL history only had about five yards per carry, with all time career leader Jamaal Charles earning 5.49 yards per carry.

For a run attempt on 3rd and 10 to succeed, an offense needs the perfect blend of an exceptional running back, an outstanding offensive line, great play calling, and a hope to catch the defense unprepared. Unfortunately, this is an order too tall to fill in most college and professional football settings.

Defensive Strategy for 3rd and 10

Any good defensive coordinator should expect a pass attempt on 3rd and 10 and should adjust their defense accordingly. This typically means running a 3-4 offense, with only three down linemen and four linebackers.

Selecting which combination of techniques and coverages depends on what the defensive coordinator feels is mostly likely to come from the offense. While zone offense allows for the defense to have coverage across the field, zone defense is susceptible to floods or crossing routes. On the other hand, man coverage can minimize these risks, but relies on proper footwork and speed to keep up with a receiver.

Pages Related to Football 3rd And 10