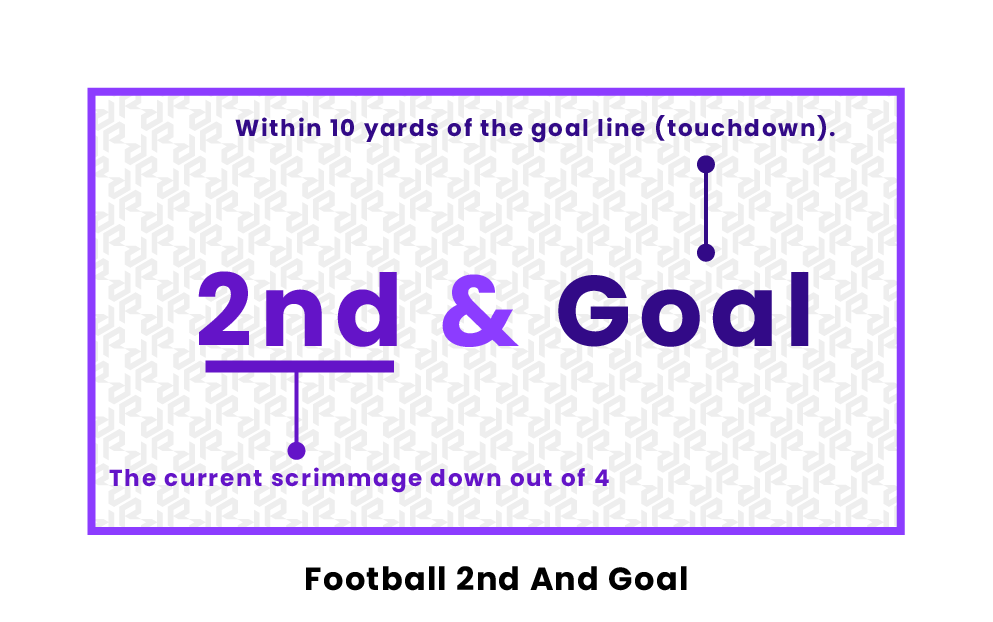 What is 2nd and Goal in Football?

Offensive Strategy on 2nd and Goal

On second and goal, the offense’s immediate goal is to score a touchdown so that they can earn at least six points and do not have to attempt a field goal. The offense can either call a run play or a pass play, both of which can be successful in this situation. However, some teams may be hesitant to call a pass play, as it can be intercepted and ruin an easier chance than usual of scoring a touchdown. For an example of this, watch the Seahawks last offensive play on second and goal in the 2015 Super Bowl, widely considered one of the worst play calls in NFL history.

Depending on how far the offense is from the end zone, plays run on second and goal can result in a yardage gain without scoring a touchdown. Though the offense wants a touchdown on every play, any gain in yardage is still an advantage over the defense.

Defensive Strategy on 2nd and Goal

The defense’s objective on second and goal is to prevent the offense from scoring, which can be a tough task to do with less than 10 yards between them and the end zone. It is typical of the defense to play man-to-man in a situation like this, especially if the defenders have a size advantage over the wide receivers. Since the quarterback and wide receivers have less room to work with in the backfield, the defense has an advantage over a passing offense on second and goal. If the offense appears to be calling a running play, the linemen must stay tight and low on the line of scrimmage, preventing the running back or quarterback from finding any space to run up the middle.

What does 2nd and goal mean?

Second and goal means that the offense is on their second down in the down cycle, with less than 10 yards to go to their opponent’s goal line. The down cycle in football is usually expressed by listing the number of the down followed by the distance to the line to gain (first down line). Once the offense gets within 10 yards of the goal line, the down number is followed by “goal” instead of a number of yards.

Is it better to run or pass on 2nd and goal?

Many debate whether it is better to run or pass on second and goal, and some suggest anecdotally that more NFL teams are opting to pass in recent years. However, according to available data, roughly half of the plays run on second and goal are passes or runs, meaning that coaches can generally go either way. Data also suggests that run plays are slightly more rewarding in terms of touchdowns, and this coincides with the dangers of passing on second and goal, where interceptions and other types of turnovers are more likely.