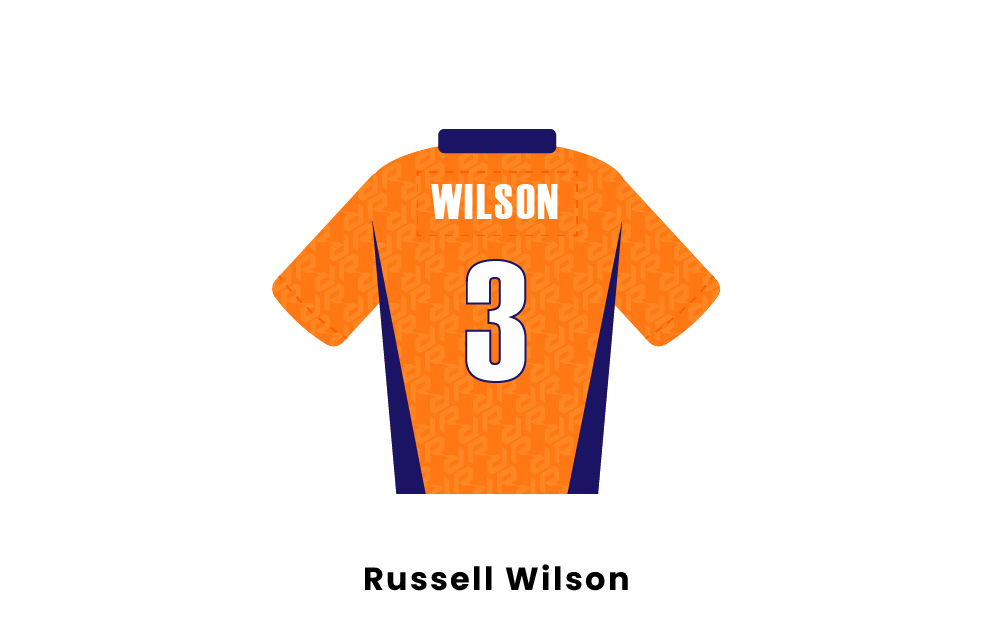 Russell Wilson is a football player and quarterback for the Denver Broncos in the National Football League (NFL) and was formerly quarterback for the Seattle Seahawks. Ever since his entrance to the league in 2012, Wilson has been a star player and leader, particularly for bringing the Seahawks to the playoffs seven times and to the Super Bowl twice.

Growing up, Wilson was a gifted athlete who played baseball, football, and basketball. He continued to play football and baseball in college and was even drafted into Major League Baseball (MLB). In addition, he still attends spring training with MLB teams today.

His impressive athletic talent has allowed Wilson to excel in every sport that he played; Wilson was a key element of the Seattle Seahawks’ success from 2012-2021. After extending his contract for an additional four years with the Seahawks in 2019, Wilson played for Seattle until 2021. In March of 2022, Wilson was traded to the Denver Broncos.

He entered the 2012 NFL Draft after finishing college and was drafted 75th overall by the Seattle Seahawks. Wilson was not the starting quarterback to begin the season but was awarded the job with five games remaining in the season. The following year, Wilson had a tremendous season and led the Seahawks to win Super Bowl XLVIII. He continued to experience success with the Seahawks, returning to the Super Bowl the next year and being named to the Pro Bowl nine times while playing for Seattle.

Russell Wilson’s football success began in high school, where he was named Conference Player of the Year during his senior year and led his team to win the state championship in Virginia. In his first season at NC State, Wilson was the first freshman quarterback to earn all-ACC first-team honors. After transferring to the University of Wisconsin, he helped his team win the Big Ten Conference title and broke the NCAA passing efficiency record.

Russell Wilson was born in Cincinnati, Ohio, and grew up in Richmond, Virginia. He was raised by Harrison Wilson III and Tammy Wilson, along with his older brother, Harrison IV, and younger sister, Anna. His father was a lawyer who played football and basketball at Dartmouth, while his mother was a nurse consultant. Wilson’s brother played football and basketball at the University of Richmond, while his sister is a former basketball player for Stanford University.

In 2012, Wilson married his high school girlfriend, Ashton Meem, but they opted for a divorce in 2014. A few years later, he began to date famous singer Ciara, and the two got married in 2016. They have had two children together. Their daughter, Sienna, was born on April 28, 2017, and their son, Win, was born on July 23, 2020. Wilson also has a stepson from his wife’s previous relationship. Aside from his children, Wilson also owns three Great Danes named Prince, Naomi, and Hero, and in 2022, he purchased a new puppy, which he named Bronco, in honor of his being traded to the Denver Broncos.

Does Russell Wilson have sponsorship and endorsement deals?

Yes, Russell Wilson has several sponsorship and endorsement deals with companies such as Nike, Wilson Sporting Goods, Amazon, Alaska Air Group, Bose, and Mercedes-Benz. Wilson has appeared in several TV commercials for companies and products such as Duracell Quantum batteries, the Microsoft Surface Pro 2, Braun Series 9 electric razor, Madden 17, United Way, and American Family Insurance. He started his own charitable organization in 2014 called the Why Not You Foundation.

Why did Russell Wilson transfer to the University of Wisconsin?

While attending NC State University, Russell Wilson was drafted into the MLB by the Colorado Rockies and was invited to attend their spring training program. After deciding to attend spring training, his football coach Tom O’Brien was unhappy with the decision and Wilson lost his football scholarship before his senior year. Therefore, he decided to transfer schools to play for one more year at the University of Wisconsin with hopes to make it to the NFL.

What college did Russell Wilson go to?

Where is Russell Wilson from?

Russell Wilson is originally from Cincinnati, Ohio, however he went on to grow up in Richmond, Virginia. He attended Collegiate School, a preparatory high school, before going on to college and pro football stardom. At Collegiate School, Wilson played baseball, basketball, and football, foreshadowing his eventual multi-sport success in college.