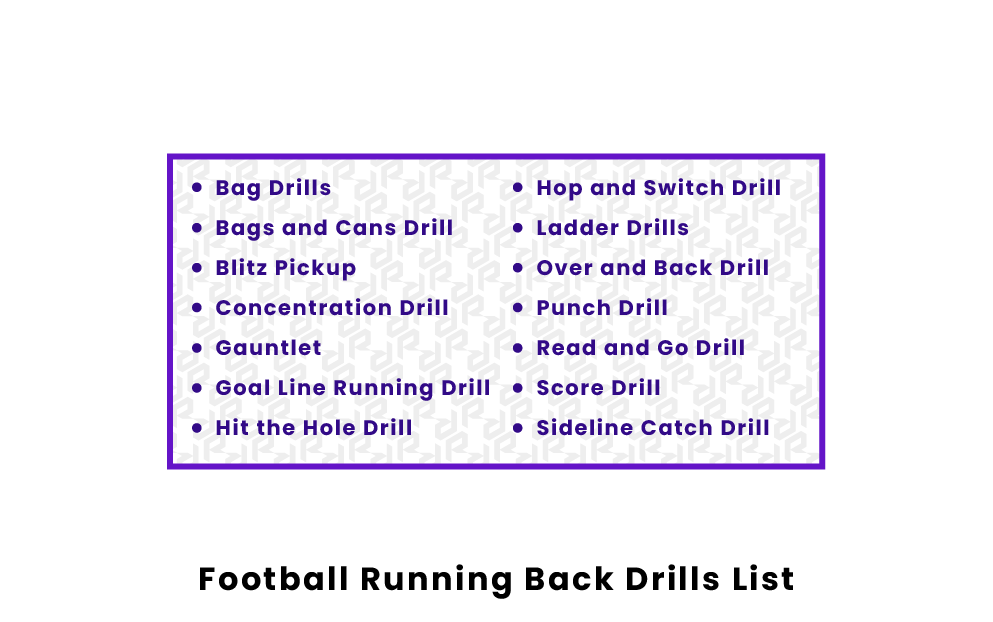 A number of bag drills involving short bags that only come up to about the shin level. Some of these include lining them up and stepping over each one, zig-zagging through them by shuffling, or zig-zagging by running forward and then backpedaling.

The bags and cans drill sets up three bags laid flat on the ground as well as three trash cans, all set up in a row. The running back must run over the bags and then transition into a zig-zag through the cans.

In the blitz pickup, a running back can practice blocking by running up to a dummy and punching it with two hands. Afterwards, they backpedal and then run forward to do the same thing to a second dummy next to the first one.

The concentration drill adds to the bag drills by having a coach hit the ball carrier with a blocking pad before stepping over the bags. At the end of the row of bags, a second coach steps in one direction, forcing the ball carrier to run in the opposite direction.

The gauntlet sees a ball carrier running through rows of players trying to swat the ball away from them, often getting very physical in the process.

In the goal line running drill, the running back must force their way between two defenders with blocking pads standing right next to each other.

The hit the hole drill forces the running back to run low to the ground as they pass underneath an obstacle before cutting to the left or right of a bag and getting the defender behind it.

The hop and switch drill has a player hop down the field from one foot to the next while staying low. The player must also switch the ball from one hand to the other on each hop.

Similar to bags, ladders can be used in many different ways, helping players to improve their footwork.

Over and Back Drill

The over and back drill is one that has players moving sideways along a straight line. The players use short, choppy steps to cross over the line and back as they move.

The simple punch drill has a stationary player turning back and forth between two dummies, punching them in a way that simulates a block.

Running backs in the read and go drill run toward a large bag in the center of the field. The coach behind the bag then pushes it in one direction, forcing the running back to quickly assess the situation and run the other way past it.

In the score drill, the ball carrier attempts to run through four defenders, one at a time, lined up one after another. Each one tries to knock the ball carrier further and further to the outside.

What are the best running back drills?

The best running back drills are Ladder Drills, the Gauntlet Drill, the Goal Line Running Drill, and Bag Drills. These drills enhance the fundamental skills a running back needs, including speed, agility, and the ability to hold onto the ball while evading or dodging tackles.

How do I become a better running back in football?

The key skills you need to improve to become a better running back are strength, endurance, stance, and handoff. Cardio and resistance training can help you improve your strength and endurance, making you more able to shed tackles, make explosive moves, and handle the physical demands of a game. Learning how to start in the proper stance and stay low, as well as properly taking a handoff, are skills that will help you excel during plays. Drills and live practice are the best way to train those position-specific skills.