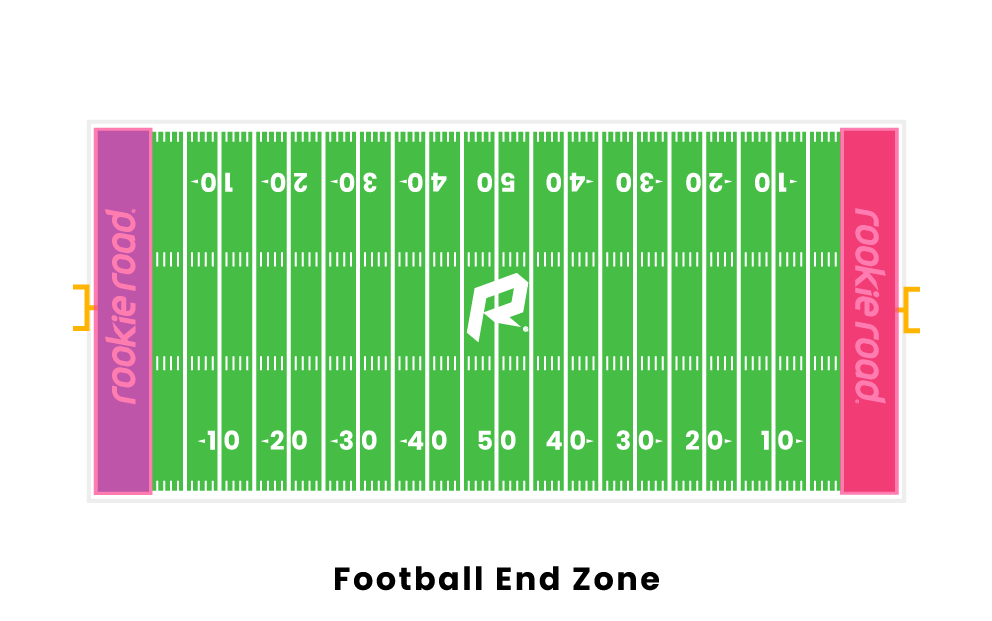 What are the Rules for End Zones in Football?

The end zone is an area on each side of the field where touchdowns are scored. Each team defends an end zone and tries to stop their opponents from gaining yards down the field and getting in their end zone.

The end zone is composed of three types of lines:

There are multiple ways that teams can score points in football, and they all relate to the end zone in different ways. Listed below are rules and regulations about how an end zone must be constructed and the ways in which a team can legally score points during a game.

Scoring a touchdown in football gives your team six points. To score a touchdown, the player must carry or catch the ball in the opposing team's end zone and remain inbounds with control of the ball. The ball carrier must also break the plane of the goal line, meaning the ball must go over the goal line.

The goalposts sit at the back of the end zone. A team can kick a field goal from anywhere on the field and on any down. Field goals are worth three points and are scored when a kicker successfully kicks the ball above the crossbar and in between the uprights of the goalpost.

Breaking The Plane Of The Goal Line

The goal line marks the front of the end zone. To understand how a referee judges the validity of a touchdown, you can imagine the goal line as a 3D plane that both the ball and its carrier can pass through. The ball must break this imaginary barrier for a touchdown to be scored. This is fully at the discretion of the referees, and sometimes instant replay is needed to justify a touchdown. Coaches can use a challenge just for this purpose.

There are four orange pylons or markers at the corners of the end zone. Referees use these to judge whether the ball breaks the imaginary 3D plane of the goal line. If the ball carrier is able to break the plane of the goal line inside or on the pylon, a touchdown is recorded. If a player touches the pylon with the ball before being ruled down or out of bounds, it is a touchdown.

What is the end zone in football?

How many points are awarded for catching a pass in the end zone?

Six points are awarded for catching a pass in the opposing team’s end zone. This is the same as any other touchdown. In the NFL, a player needs to fully possess the ball and ground two feet in bounds for the touchdown to count. In NCAA football, players only need to ground one of their feet.

What touchdown rules are there in the NFL?

In the NFL, a player must catch or carry the ball in the opposing team’s end zone and remain in bounds in order to successfully score a touchdown. In addition to these rules, a ball carrier must also break the plane of the goal line, meaning the ball must both go over to the goal line in order to score. If a referee determines that any of these rules have not been followed, the touchdown will not be scored.