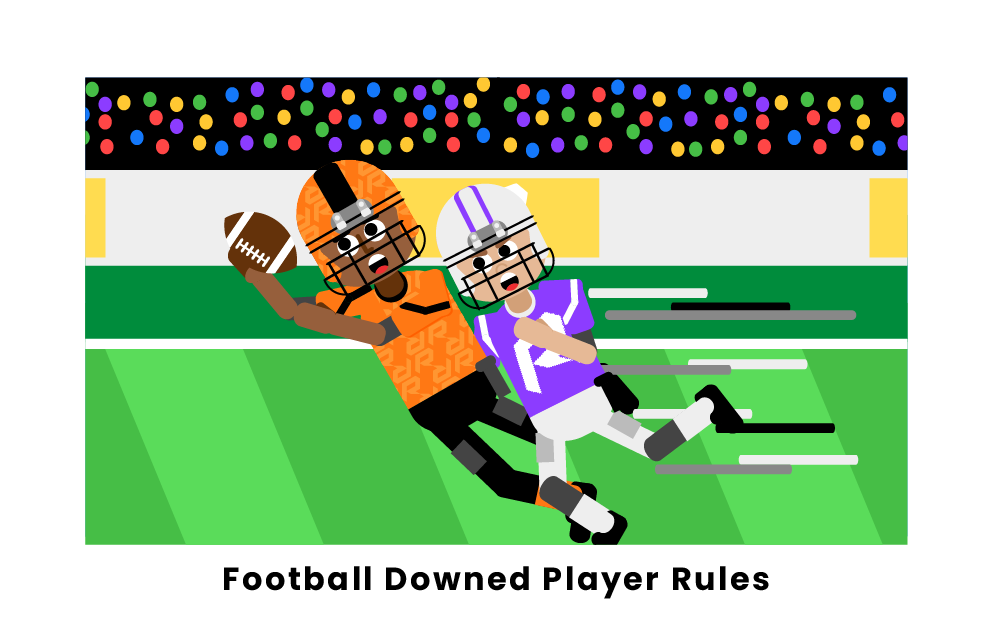 In football, play can stop for a variety of causes. One reason play might stop is if the player carrying the ball is downed. The most common way for the ball carrier to be downed is to be tackled by an opposing player. Read on for all the information you need on downed players in football, including legal and illegal tackles, dead ball rules, and differences among downed player rules in the most popular football leagues.

What is a Tackle? 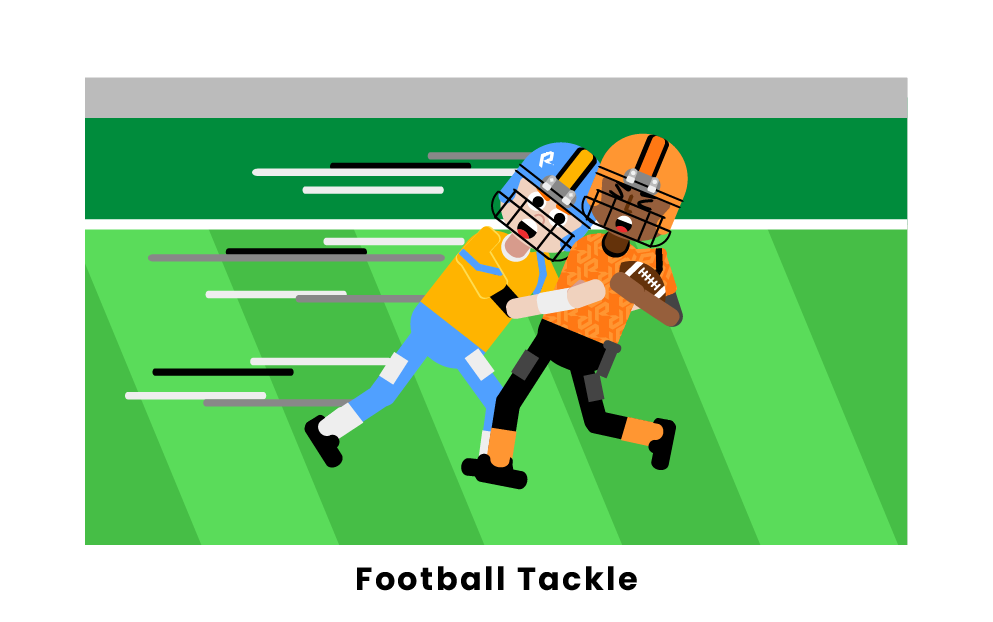 When a player carrying the ball is tackled to the ground, the play is called dead and the offense must line up at the line of scrimmage to begin play again.

Tackling is essential to defense in football because it prevents scoring and limits the advancement of the football. If there were no tackling in football, the game would be a matter of which team could run down the field more times.

When is a Player Down?

A player may also give themselves up or take a knee on purpose; these actions also count as being down. On a kickoff, if the returner catches the ball in the end zone, they have the option of taking a knee for a touchback. Quarterbacks may also give themselves up when a defender is approaching to avoid a hard tackle. At the end of the game, a team may also run a quarterback kneel to run time off the clock, which involves the quarterback immediately kneeling after they take the snap.

Occasionally, a player will appear to be down but keep running. As long as a whistle isn’t blown by a referee, the ball is still live. Plays where it is unclear if a player was down or not will be reviewed by the game’s officials.

There are certain standards that a tackle must follow, mostly to prevent injuries to the players playing the game. Therefore, there are legal tackles and illegal tackles.

There are a few exceptions to where a tackle may occur. A defensive player can tackle an offensive ball carrier almost anywhere to bring them to the ground, including grabbing their legs to trip them or using their body to push them into the ground. Grabbing a player from behind to pull them backward is also legal. Stopping forward progress, which is when a ball carrier has stopped moving forward for a certain amount of time (usually a couple of seconds), results in a dead ball and stoppage of play. These tackles are all legal.

Illegal tackles are illegal because they risk putting players in danger. Tackles to the head and shoulder areas are strictly forbidden and rules have been implemented to discourage this from occurring. Tackling a player by pulling on their facemask is also forbidden. Grabbing a player from behind around the neck and shoulder area is also illegal and is called a horse-collar tackle. Offensive players cannot tackle defensive players unless the defensive player has gained possession of the football. A player cannot lead their tackle with their helmet, or a penalty will be called for a dangerous tackle.

The ball in football is called dead when one of these situations occurs:

There are some variations of these rules, depending on the league that play occurs.

The tackling rules for the NCAA are similar to that of the NFL except for a few differences. The main difference is that, in the NCAA, a player does not have to be tackled to be called down, unlike in the NFL. Instead, if a player trips or falls accidentally, they may be called down in NCAA football. Like the NFL, a player is down when a part of their body other than the hands or feet touches the ground. There is also much more emphasis on leading with the helmet penalties in the NCAA, as they are called more often than in the NFL.

A player is ruled down when any part of the player’s body besides the hands or feet touches the ground, like in the NCAA. However, a player in the NFL must be contacted by an opponent to be ruled down by contact. This means NFL players can completely touch the ground while making a catch or running the ball and won’t be ruled down unless an opponent touches them while they are on the ground. A player can also be called down by forward progress, in which case their body does not come in contact with the ground, but the defense has prevented them from gaining yards for a set amount of time.

The CFL has a similar rule to the NFL wherein a player must be tackled to the ground for the ball to be called dead, unlike the NCAA where a ball carrier falling to the ground results in a dead ball. The major difference between down rules in the CFL and NFL is that a kneel-down in the CFL does not result in a dead ball, but a ‘rolling snap.’ The rules for when a player is ruled down in the CFL are identical to the NFL rules on downed players.

Can the ball touch the ground in football?

Does a player have to be touched to be down in football?

In the NFL, a player needs to be either downed by contact or touched when they are down. This means that if a player falls to the ground without contact, they need to be touched by an opposing player to be considered down. In lower levels of football, such as the NCAA and US High School football, players are considered down when any part of their body besides the hands and feet touch the ground, regardless of whether they were down by contact.

Is the elbow considered down in football?

Is the shin considered down in football?

The shin is considered down in football at all levels. In both NFL and NCAA football games, the ball carrier is down if any part of their leg above the ankle touches the ground. Therefore, contact between a ball carrier’s shin and the ground will always result in that player being called down.