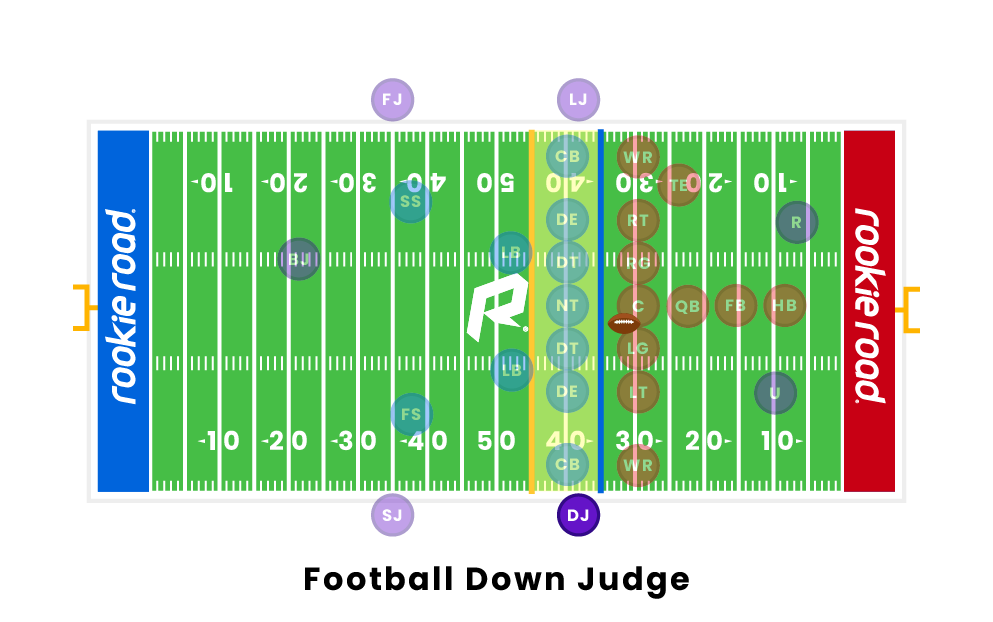 Who is the Down Judge in Football?

The down judge is one of the seven referees officiating a football game. The down judge has to look out for penalties as a play starts and develops, focusing on the area around the line of scrimmage and a few yards ahead, and the nearest sideline.

Where Does the Down Judge Stand?

The down judge is positioned near one sideline, at the line of scrimmage, and works together with the line judge, who is in the same position on the opposite sideline.

Down Judge Roles and Responsibilities

Before the snap, the down judge, along with the line judge, will watch for penalties, such as illegal motion, offside, false start, or encroachment. These are very common penalties, so the down judge must be good at spotting them. The down judge continues to watch the line of scrimmage on passing plays to ensure that forward passes are legally thrown from behind the line.

After the snap, it’s the down judge’s job to be attentive to the nearest sideline and rule if a player is out of bounds when receiving a pass or running with the ball. Some plays near the sidelines can be game-changing. Therefore, the down judge’s alertness to the sideline is crucial for a game to run smoothly. When a play ends, the down judge comes in to check how many yards a team has advanced and signals that result to the other officials. The down judge is also the official in charge of the chain crew, and when necessary, they come onto the field to measure the ball’s distance from the first-down line.

Down Judge vs. Head Linesman

Prior to the 2017 season, the down judge was known as the “head linesman,” but in 2017, the NFL renamed the position “down judge.” The change was made after the league found it necessary to have a gender-neutral name for the role due to the fact that Sarah Thomas was hired as the NFL’S first full-time female down judge.

Pages Related to Football Down Judge