What is the Chain Crew in Football?

The chain crew is a group of people in charge of showing the down and distance on the sidelines of a National Football League field.

There are usually eight members per crew, with each NFL team having their own group. Chain crews generally are a family affair, with the jobs being passed down from generation to generation. Chain crew members make around $100 dollars per game, but since they are employees of the team and not the league payment is not standardized. 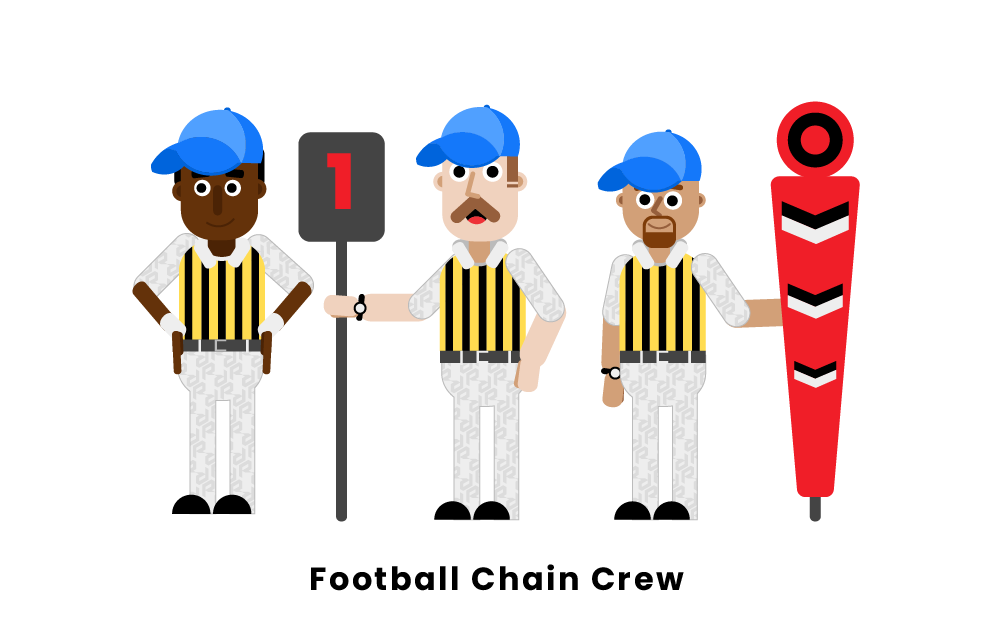 There are two people who hold the actual chain, a 30 foot long measurement of a first down that the referees use to see whether a team has earned a new set of downs. Each person holds one rod attached to the chains, with one standing where the play begins and the other at the first down location.

There is a clip guy who places a clip at the chain's five yard marker. This ensures that an accurate measurement can be taken even if the sticks get knocked over during the play.

The box man holds the large stick that denotes the down, either 1st, 2nd, 3rd, or 4th. His job is to change it after every play depending on the outcome. There is also an alternate box guy on the other side of the field who just copies the predominant dial marker.

A worker is in charge of down-and-distance, meaning he will write down on a card every play what down it is and how many yards needed for a first down.

The "O" guy is the crew member who stands on the opposite sideline from the chain crew, marking where a first down would be in a straight line from his crew counterpart. Having this worker hold a stick up makes it easier for the referees to make eye-judgement calls on the field.

Lastly, there is the crew chief who is usually in charge of tracking any penalties on a card that occur during a game while also ensuring that the whole operation runs smoothly.