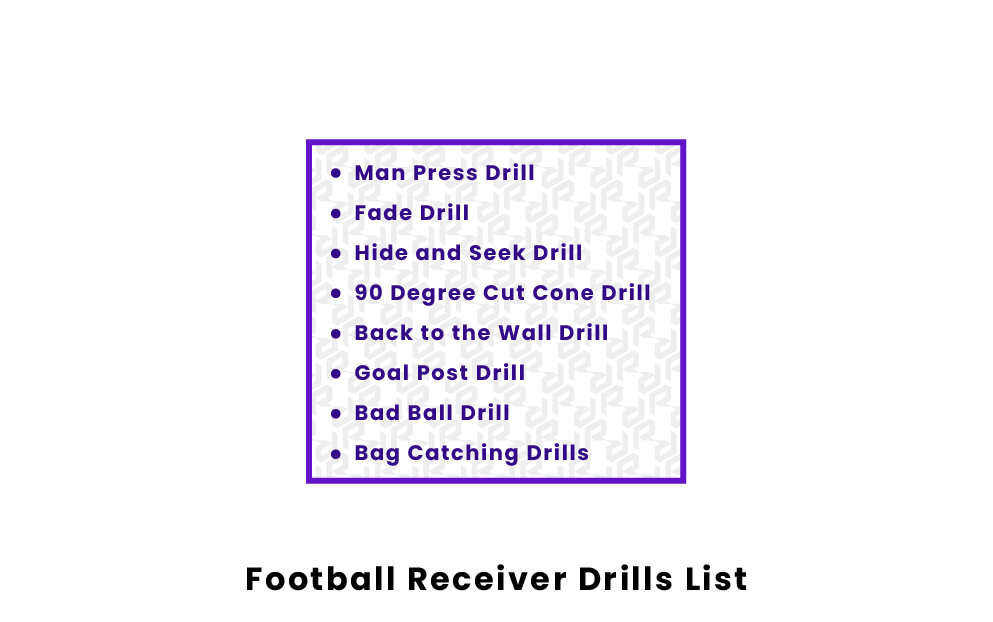 The man press drill is simply meant for the wide receiver to beat their man. In it, the defensive player does his best to cover the receiver while the receiver tries to get open. The drill will last for a few seconds, until the ball is thrown.

The fade drill simulates an in-game situation in which the receiver runs a fade route toward the sideline. The quarterback tosses the ball over the receiver’s shoulder who must find and catch the ball.

The hide and seek drill involves the receiver running off the line of scrimmage, downfield, before making a quick turn around a dummy or bag. He must be ready for the pass as he is making the cut back to the ball.

Back To The Wall Drill

The bad ball drill consists of the quarterback throwing poor passes to the receiver while running. These might include throws that are too high or behind the receiver. The bad ball drill helps a receiver specifically work on catching difficult or badly thrown balls so they are ready for anything come game time.

Bag catching drills, also known as simply bag drills,  have receivers navigate through bags to improve their footwork before catching a pass and running upfield. This is one of the best ways for a wide receiver to work on their basic agility.

What are the best receiver drills in football?

The man press drill is one of the most realistic and efficient receiver drills in football, as it does not require a long time to set up and simulates in-game situations. The receiver should engage with the defensive back as they would in a game, trying to get open while being covered 1-on-1. The drill only takes a few seconds to run, and several receivers can get reps in a short period of time.

How do I become a better receiver in football?

The best way to become a better receiver in football is to work on your agility and ball handling skills. Both tight ends and wide receivers must be extremely agile moving across the field and they need to be able to catch perfectly placed balls as well as more difficult catches. Thankfully, there are many drills a receiver can do to work on both skill sets.