What Does A Cornerback Do In Football? 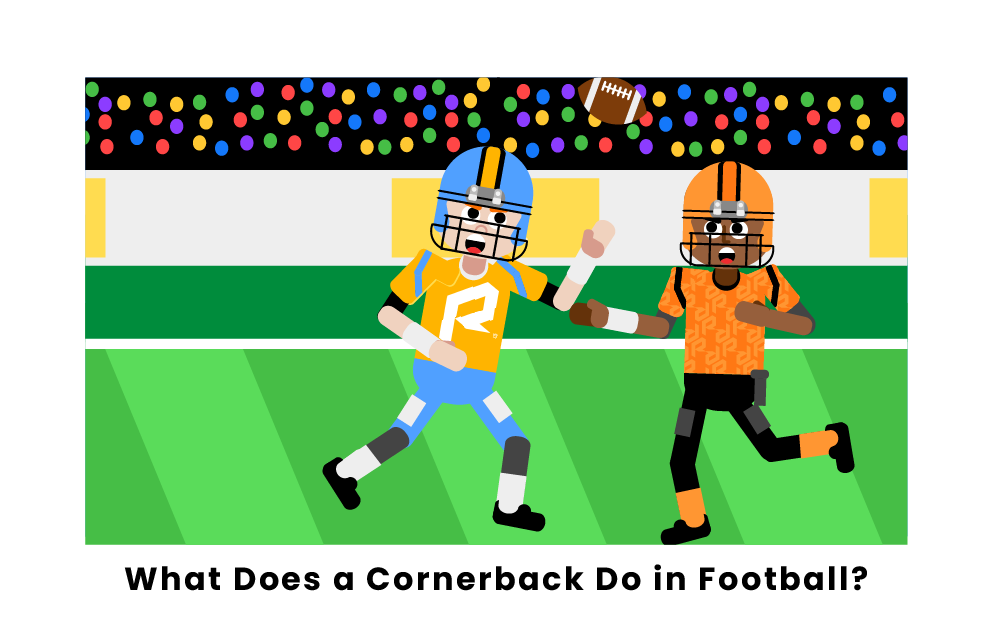 A cornerback (CB) is a defensive player in football. The cornerback guards against the offensive team, particularly any player that may catch the football on the offense, such as the wide receivers (WR), tight ends (TE), or running backs (RB). The cornerback is one of three positions considered to be defensive backs (DB), the other two being free safety (FS) and strong safety (SS).

Most of the time, cornerbacks line up opposite the offense’s wide receivers, guarding them in order to prevent a completed pass. Cornerback can be a particularly challenging position to play, as it can be hard to guess where a receiver may go to catch a pass. Additionally, cornerbacks who do pursue a receiver need to be very wary of avoiding a pass interference penalty, which can cost their team 15 yards.

Cornerbacks line up in what is called the secondary (as in the second line of the defensive formation, behind the defensive linemen). They often find themselves one-on-one with wide receivers in pass coverage, meaning they have no help if they make a mistake. If an offensive player can get past the secondary, they will most likely score, so cornerbacks are vital on both passing and running plays, as they comprise the last line of defense between the offense and the end zone. For this reason, cornerbacks are sometimes called coverage specialists.

Cornerbacks are valuable players who need to be prepared for a variety of plays and circumstances on the field. As a result of this, they should possess good length and be light on their feet. Being a cornerback means having many versatile roles, which is why it is one of the most challenging positions to play on any football team. Cornerbacks have a number of responsibilities on the field, most of which involve preventing the offense from advancing down the field to score points.

The main responsibility of the cornerback is to guard wide receivers, who are the primary offensive players to be targeted by long passes from the quarterback. If a cornerback perceives that the offense is going to attempt a long pass, he can tail the wide receiver in order to potentially intercept the pass, knock it out of the air, or tackle the receiver after he catches the ball. However, cornerbacks need to be careful not to impede the wide receiver’s ability to catch the pass, such as by grabbing them, blocking their arms or line of sight, or pushing off of them in order to intercept the ball. All of these could result in a steep 15-yard penalty for defensive pass interference.

While not a primary responsibility, cornerbacks are occasionally tasked with tackling running backs. Cornerbacks should be capable tacklers in the event that a running back gets through the first line of the defense; otherwise, a small blunder by the defensive line can turn into a touchdown scored by the offense.

In addition to defending against runs and pass attempts, cornerbacks work to create turnovers on the field. Typically, this is accomplished by intercepting passes, but hard-hitting cornerbacks can also use their position on the field to tackle ball carriers and force a fumble. On occasions, cornerbacks will even record “pick sixes” in which they intercept the ball and run it all the way into the opponent’s end zone for a touchdown.

Cornerbacks and safeties are both classifications of defensive backs in American football, although they have slightly different roles. Cornerbacks are more frequently tasked with guarding wide receivers one-on-one and therefore will line up on the outside edges of the field. These players need to be extremely fast and capable of making sharp turns to defend receivers effectively.

Safeties, on the other hand, more commonly play the middle of the field and are responsible for a wider variety of maneuvers. These can include making tackles against the opposing tight ends, running backs, receivers, or even the quarterback. This position also shifts depending on a team’s defensive preferences and what type of offense they are playing against. Safeties can frequently find themselves as the last line of defense and must be reliable tacklers. They are often vocal leaders on the defense and have a strong understanding of defensive concepts so they can thrive in multiple spots on the field.

How tall are cornerbacks in the NFL?

The average cornerback in the NFL is just under six feet tall. Some noteworthy NFL cornerbacks have been far taller, like Brandon Browner, but the average height of cornerbacks is 5’11”. While height certainly doesn’t detract from a cornerback’s ability to perform, the need for speed often rules out larger players from being able to effectively play their position.

Who are the best cornerbacks in NFL history?

Top cornerbacks in NFL history include Darelle Revis, Deion Sanders, and Richard Sherman. Each of these cornerbacks possessed the ability to silence even the most elite of wide receivers, keeping their teams in the game on a regular basis. Deion Sanders is a Pro Football Hall of Famer because of his prowess at the position, and it is more than likely that Sherman and Revis will one day join him in that esteemed rank.

What does CB mean in football?

In football, “CB” is the abbreviation used for a cornerback. The term is often used in positional diagrams, player profiles, and box scores in order to show fans that a player’s position is cornerback. There is a different abbreviation, typically consisting of one or two letters, for every position in the sport.

Pages Related to What Does A Cornerback Do In Football?