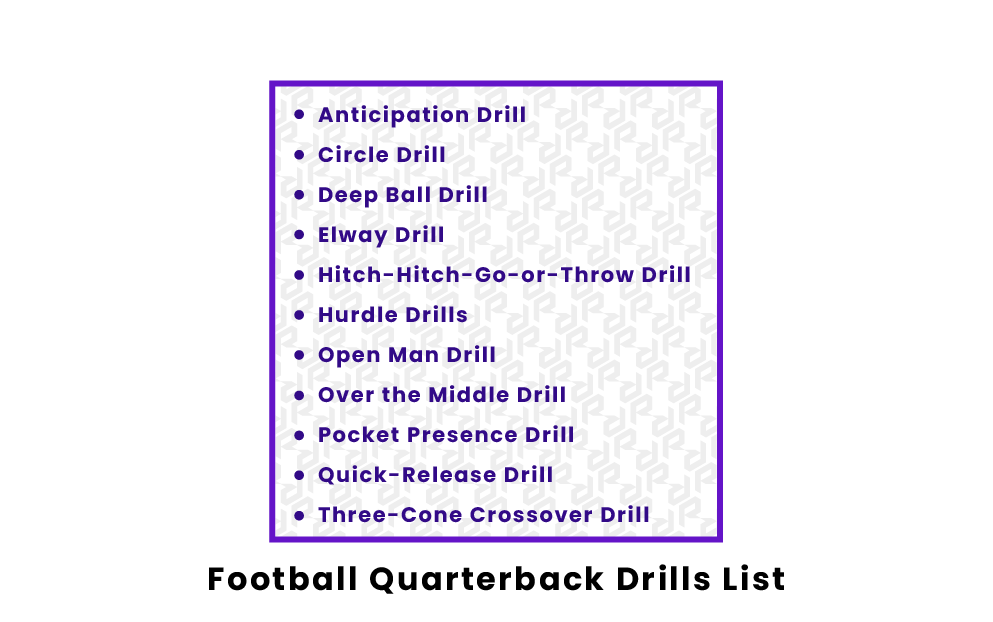 In the anticipation drill, a receiver runs parallel to the line of scrimmage behind something that hides their position from the quarterback. The quarterback must anticipate when the receiver will come out from behind the cover to throw a good pass.

In the circle drill, two quarterbacks stand on opposite sides of a circle with a radius of five yards. The players toss a football back and forth while running and switching directions regularly.

The deep ball drill is simply meant to get the quarterback to practice throwing long passes to his receivers. It can be substituted with other routes as well.

In the Elway drill, four bags are set up to form an X. The quarterback steps over them in a circular motion until they are signaled to hit a receiver with a pass.

Numerous miniature hurdle drills exist in which the quarterback must step over or around the hurdles while keeping their eyes up until they are signaled to pass the ball to a receiver.

The open man drill makes things a little more difficult by asking the quarterback to identify the correct receiver quickly. In the drill, the receivers spread out in front of the quarterback, and all but one put up two hands at the coach’s signal. The quarterback must find that last receiver, who puts up one hand, and throw them the ball as quickly as possible.

Over The Middle Drill

Similarly, in the over the middle drill, wide receivers, one after another, run parallel with the line of scrimmage while the quarterback hits them with a pass.

The pocket presence drill is meant to help the quarterback be more aware of their surroundings in the pocket. In it, multiple defensive ends rush the quarterback one at a time, forcing the quarterback to evade them while he continues to look for his receivers.

The quick-release drill has a coach rapidly giving the quarterback one football after another as the quarterback catches the ball, grips the laces, and throws the ball as quickly as possible without looking at the coach.

The three-cone crossover drill uses three cones set up in a line. The player holds a medicine ball while straddling an end cone. He steps over the middle cone with his outside foot and then brings his other foot to the outside of the cone on the other side, going back and forth.

What are the best quarterback drills?

How do I become a better quarterback in football?

The main skills you need to improve to become a better quarterback are agility, arm strength, throwing motion, onfield vision, and leadership. Agility, arm strength, and a quick throwing motion are all physical skills that serve a quarterback during plays. Strength training, drills, and live practice can be combined to train those skills. Onfield vision and leadership are harder to train. A combination of experience, game repetitions, mentorship, and film study is the best way to improve these intangibles.