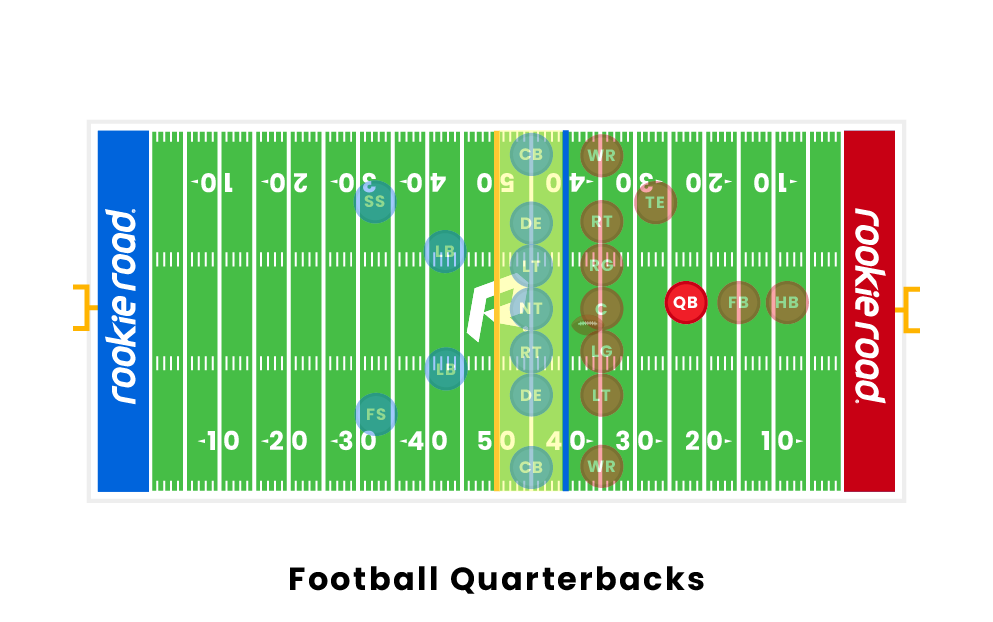 The quarterback is an offensive player who is generally a football team's leader and most valuable player. The quarterback starts with the ball on every play and can choose to 1) pass the ball, 2) hand it off to a running back, or 3) run with it himself.

A football down is one of four plays at the line of scrimmage the offense gets to advance the ball. If a team does not cross the first down marker within four plays, it will result in a turnover. In most circumstances, the quarterback will be on the field for the first three downs. On the fourth down, teams will usually either punt the ball or kick a field goal depending where they are on the field. However, in short yardage situations when the game is close, the quarterback may remain on the field and run a play on fourth down.

On any given offensive play, the quarterback has a handful of responsibilities. These jobs range from before the snap is made to running the play after the ball is snapped. The quarterback’s jobs include:

On a passing play, the quarterback scans the field for an open receiver and then throws the ball to the receiver. It's considered a completion if the pass is caught. The pass is incomplete though if the ball is dropped or thrown out of bounds. If the quarterback is unable to find any open receivers, he can choose to run with the ball, throw it out of bounds, or purposefully throw an incomplete pass to avoid a loss of yards or turnover.

On a running play, the quarterback hands the ball to a running back or another skill position so they can begin a run. This initial action is called a hand off. A quarterback can also fake a hand off to make the defense think that it is a run play but will pass the ball instead.

The pocket, sometimes known as the tackle box, is a hypothetical area on the field created by the offensive line to protect the quarterback from being sacked. The pocket gives quarterbacks time to scan the field to find an open receiver to pass to. In regard to the intentional grounding rule, a quarterback must run outside of the pocket in order to intentionally throw an incomplete pass.

Being a good quarterback at any level is tough. The position requires you to have exceptional abilities throwing the ball as well as have a great understanding of opposing defenses and your own playbook. Here are a few traits that are important in being good quarterback:

Being a good quarterback is not just about how far or fast you can throw the football. In fact, most quarterbacks who don’t have much success on the field are because of their lack of preparation on the mental side of the game. Those who practice, watch film, and learn the ins and outs of football are the ones who tend to have great success on the field.

What is a quarterback in football?

In football, a quarterback is the offensive player who starts the ball every play and is known for throwing the ball. They are arguably the most valuable player on any team as they are in charge of initiating the ball down the field, which is the main way to score. After each snap, the quarterback will either pass or hand-off the ball to a fellow player, or run it himself to gain yardage.

What is the quarterback responsible for in football?

The quarterback is responsible for calling plays, receiving the snap, handing the ball off, throwing the ball, and analyzing the opposing defense. The quarterback is the leader of the offense, and lets everyone know what play they will be running. Quarterbacks must also analyze the defense before the snap and make any necessary adjustments. Once the ball is snapped, the quarterback will either throw the ball, hand it off to another player, or run with it themselves. They then repeat this process until their team scores or turns the ball over.