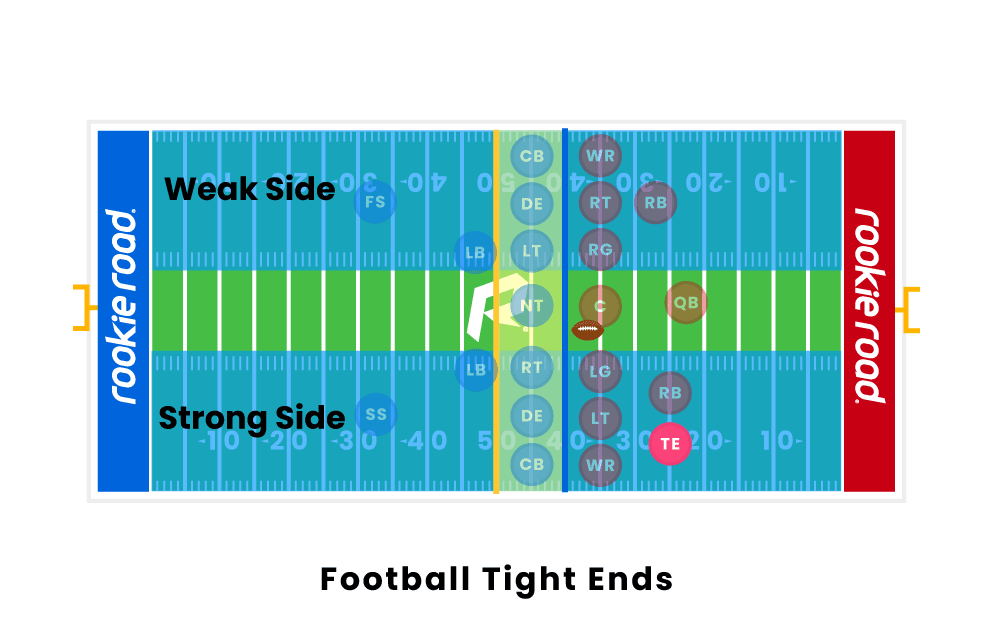 A tight end has two main jobs: blocking and receiving. The TE must block the quarterback if a cornerback or lineman is attempting to sack them. They also must block defensive players as an attempt to open up space for a running back to gain yards. As a receiver, the tight end’s goal is to gain as many yards as possible after catching the ball, typically by outrunning linebackers or by being too large for the safety to tackle. Some tight ends may also run the ball, but this is much less common.

The ideal tight end is larger than a typical wide receiver so that they can adequately protect the quarterback or running back when blocking. The perfect tight end is also faster than their offensive linemen teammates so that they can get open and rack up receiving plays to gain yards. Many tight ends have a specialty in either blocking or receiving, but the most elite players excel in both areas. They must generally have both great hands and speed, while also being exceptional at blocking. Due to the high demands of players at this position, tight end is considered one of the most difficult positions to play.

The position of tight end has shifted into a new form over the years, now becoming a position with a much heavier focus on receiving. Since tight ends are much larger than typical wide receivers, they are harder to tackle and teams use this to their advantage. Modern tight ends can record upwards of 80 catches per season now, while still blocking on running plays.

Tight ends in both the NCAA and NFL wear jersey numbers between 80-89, similar to some wide receivers and some linebackers. In recent years, the NFL has also allowed TEs to wear numbers between 1-49, as well.

How much are NFL tight ends paid?

As a position, tight ends are paid less on average than receivers, linemen, and quarterbacks. In 2021, 12 tight ends in the NFL were paid more than $7 million, as opposed to the 32 receivers who were paid more than $7 million. As of 2022, the highest paid tight end in NFL history is George Kittle of the San Francisco 49ers, who makes an annual salary of $15 million on his current contract.

Who are the best tight ends in the history of the NFL?

Tight ends have become more receiving-oriented, breaking the previous mold of being predominantly blockers. With this in mind, it should come as no surprise that many of the most noteworthy tight ends in the history of the NFL have come from the most recent era of NFL superstars. Some of the best tight ends in the history of the NFL include Tony Gonzalez, Antonio Gates, and Shannon Sharpe. Each of these players was a dynamic threat on offense, with each putting together an all-time great career stat line.

What is the difference between a tight end and a wide receiver?

In football, tight ends are essentially hybrid players that combine the responsibilities of wide receivers and offensive linemen. A wide receiver’s role is to catch passes from the quarterback, ideally resulting in gained yardage. Offensive linemen are meanwhile tasked with blocking the opposing defense to either create openings on run plays or protect the quarterback on passing plays. The tight end shares both of these responsibilities and will vary their actions based on the play design.