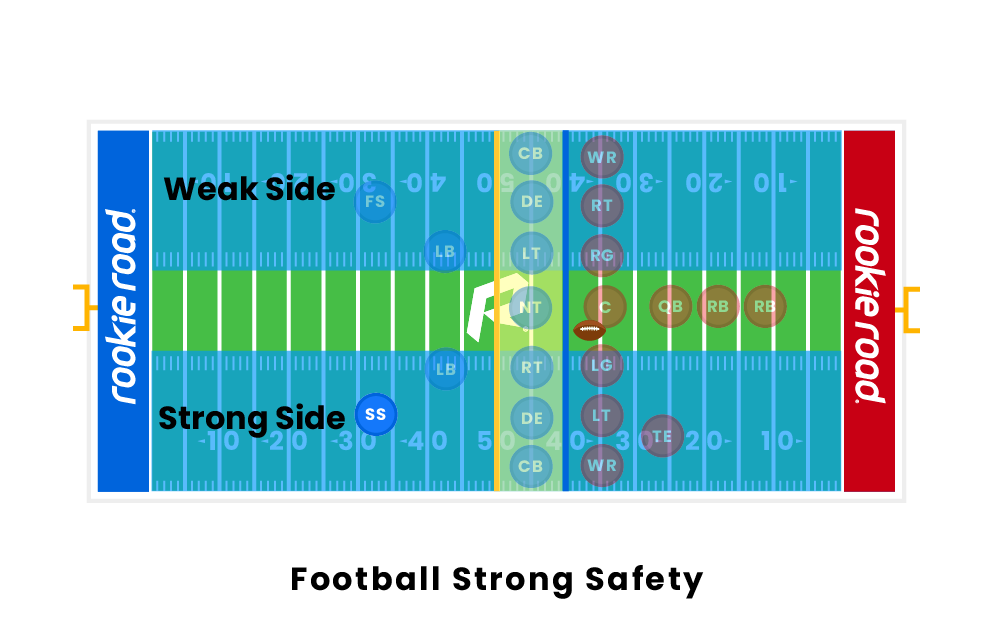 The strong safety must protect against passes from the opposing team's quarterback. They also may need to tackle the ball carrier if he breaks through a gap in the defensive line.

The strong safety is a member of the secondary and also known as a defensive back.

The secondary is a group of players on defense that stand in the defensive backfield, the area behind the line of scrimmage. The strong safety and their counterpart, the free safety, serve as a last line of defense if the ball carrier on the opposing team's offense manages to break through the defensive line.

The strong safety is usually larger and more muscular than the free safety. However, this is not why he called the strong safety. He is responsible for covering the offensive strong side, which has more players and opportunities for the opposing offense. He works to stop the run by stepping into the runner’s route and blocking, but he also is there to cover the pass. The strong safety has a job of tackling the ball carrier on both passing plays and running plays if they break through the defensive line.

Strong safeties are positioned closer to the line of scrimmage to fight off tight ends and other larger players. That is why they are placed on the strong side of the field. Offensive receivers must break through and get past the defensive end and cornerback to enter a strong safety’s zone of defense.

Strong safeties must be a combination of excellent pass defenders and run stoppers. This is because they must support cornerbacks and linebackers in defending against the pass while also serving as the last line of defense if a run breaks through into the secondary. Therefore, they must be speedy and agile enough to keep up with opposing receivers, while also strong enough to make big tackles.

What is a strong safety in football?

In football, a strong safety is a defensive secondary player who is positioned in the defensive backfield. The last line of defense will usually be the two safety positions, and they each are named for the side of the field on which they are placed. Strong safeties are positioned on the strong side of the field, which is the part of the field that the tight end is on across the line of scrimmage.

What is the SS position in football?

In football, SS stands for Strong Safety. Strong safeties are pivotal to defending against long passes and runs that break through the defensive line. They primarily fight off tight ends and larger players but are really placed to block any offensive receiver who enters the secondary on their side of the field.