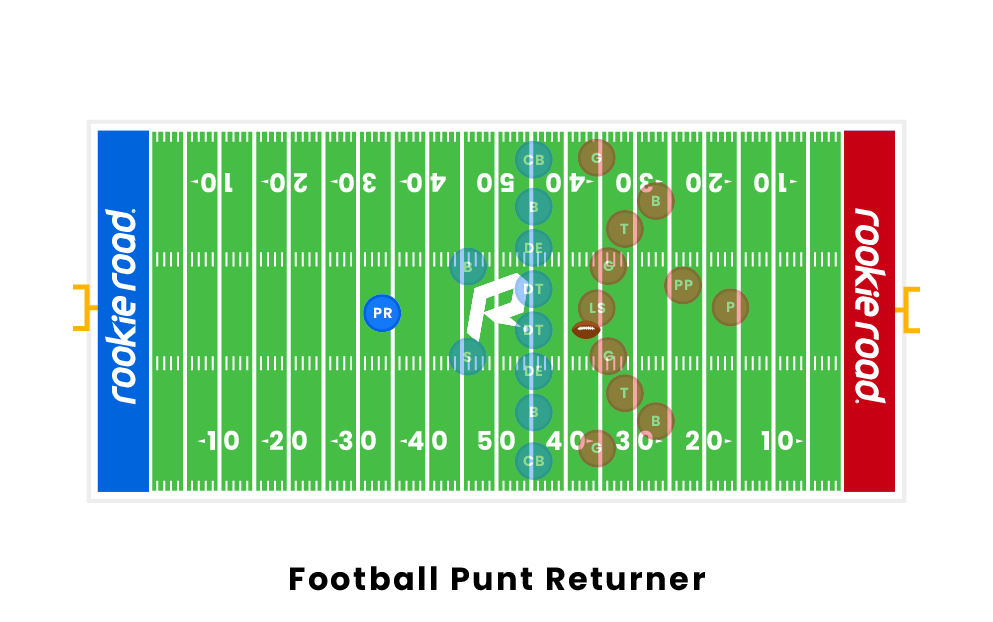 What is a Punt Returner in Football?

A punt returner in football is a special teams player whose primary role is to receive and return punts to gain yardage for the offense. The punt returner usually doubles as a kick returner on kickoffs as well. A punt returner is meant to be very quick and agile, as well as coordinated, in order to track down the position of the ball in the air, catch it, and evade covering players when returning the ball down the field.

The primary responsibility of a punt returner is to catch the punt and return the ball, giving their team an advantageous field position. Ideally, a punt returner will return a punt for a touchdown, but this is a rarely-achieved goal. Punt returners are also responsible for properly signaling for a fair catch when necessary and knowing when to allow the ball to bounce into the end zone for a touchback.

The difficulty of the punt returner position is judging how close the defense is to you. When playing punt returner, you must keep your eyes on the ball in the air, and you cannot look to see where the defense is. The returner can call for a fair catch by waving their arm in the air. A fair catch simply calls the play dead when the returner catches the ball, and the offense takes possession at the spot of the catch.

The most basic punt return formation involves lining up eight or nine blockers on the line of scrimmage and blitzing the punt while the punt returner moves to the backfield to return the punt. This formation is most effective at blocking a punt, which is one of the punt return unit’s goals. The large number of blockers also, ideally, gives the returner as much time as possible to advance down the field. I-formations were popular for punt returns in prior years, but most teams now crowd the line in hopes of blocking a punt.

The primary skills needed to be a good punt returner are good hands, quick reflexes, and fast feet. It is also important to have an awareness of game strategy and field position in order to quickly decide how to execute the punt return.

What is a punt?

In football, a punt is a long kick that typically occurs on the fourth down of an offensive drive, after the offensive team has failed to attain a first down after three play attempts. In a punt, the offense attempts to kick the ball far down the field without entering the end zone, while the returning team attempts to catch the ball and run it as many yards as possible towards their own end zone.

What is a punt return in football?

A punt return is the name for the attempt made by the receiving team on a punt play to bring the kicked ball down the field in a scoring attempt after catching the kick. Once a punt is made, a punt returner typically stands deep in the backfield and can either elect to call for a fair catch, which will give their team possession wherever he catches the ball, or to try a return. If the receiving player chooses to return the ball, they must try to evade the offense’s coverage squad and gain as many yards as possible in order to give their offensive squad good field position.

What are the positions on the field for a punt return?

The positions on the field for a punt return are blockers, jammers, and punt returners. Blockers line up on the line of scrimmage and attempt to block the punt. Jammers are specialized cornerbacks that try to prevent the opposing gunners from reaching their punt returner, which is responsible for catching and returning the punt.