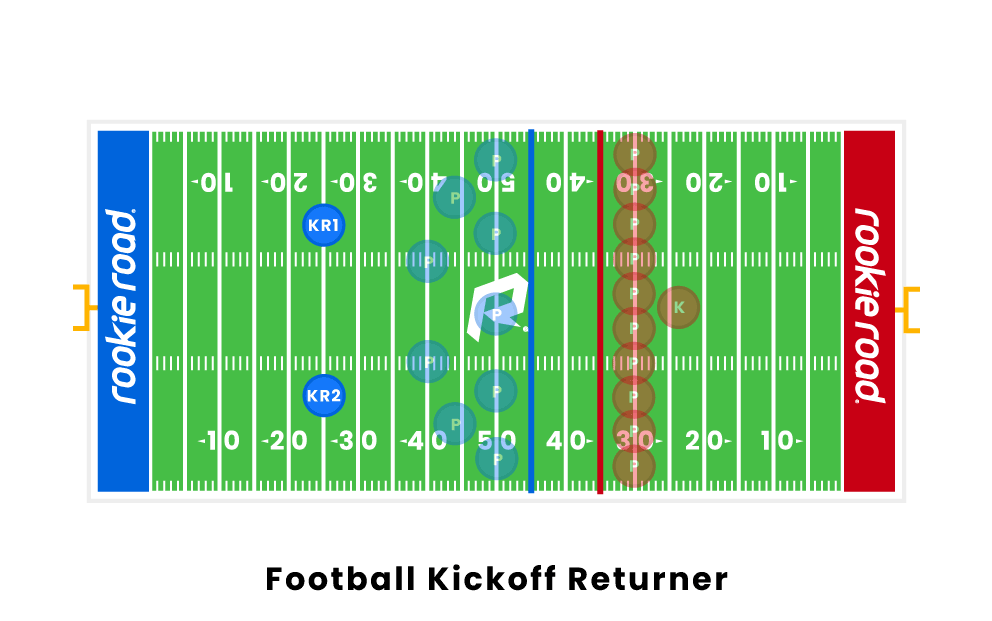 What is the Kick Returner in Football?

Kick returners are always positioned deep in the defensive backfield. There are typically two kick returners and each will focus on one side of the field, but they both are responsible for catching and returning kickoffs wherever they land. On punts, the one returner will have to cover the backfield alone.

The kick returner has one of two goals: 1) return the ball to good field position for the offense about to take the field, or 2) return the kick for a touchdown. While touchdowns are much more desirable, returners have to be careful they are not too sporadic in their return attempts, since fumbles and negative yardage runs are common on these plays.

One mistake the returner often makes is muffing the catch. To muff means to mishandle the football as the catch is attempted, which leads to the ball hitting the ground. Muffs can be caused by impending pressure from the return defenders or simply because the kick was high or hard to catch. Muffing a return is extremely detrimental due to the field position it can give the kicking team if they recover the fumble.

Returners usually opt to catch the ball rather than letting it bounce since a football’s shape makes it unpredictable, however, some returns occur in this situation. Returners should also be cognizant of the out of bounds line, as allowing a kickoff to go out rather than to catch it will result in a penalty for the kicking team.

First and foremost, kick returners must be some of the fastest players on the field. They are charged with outrunning kicking team players that have a significant head start due to hang time of a kick. Thus, acceleration and speed are some of the most important qualities a kick returner can have.

Kick returners must also have excellent field vision, as they must find holes in the kicking team’s pursuit to break through. A kick returner that is able to see the field well will have a much easier time finding open space.

The final important skill for a kick returner to have is to be elusive. An elusive kick returner makes it very hard for the kicking team to make a tackle and increases the chances of the returner breaking through.

What is a kickoff returner in football?

In football, the kickoff returner is a player on the special teams whose responsibility is to catch and return kickoffs from the opposing team. There are typically two kickoff returners on each return and they have roughly one side of the field each to cover. On punts, there is usually just one returner because there is much less chance of a ball going deep into the backfield.

What does the kick returner do in football?

The main responsibilities of a kick returner are to return kicks for a touchdown or return the ball to a good field position for the offense to start at. The second option is much more common, and the kick returner will use the punt or kickoff as a chance to get as close to the opposing team’s goal line before the offense takes over. On rare occasions, they may return it fully for a touchdown.