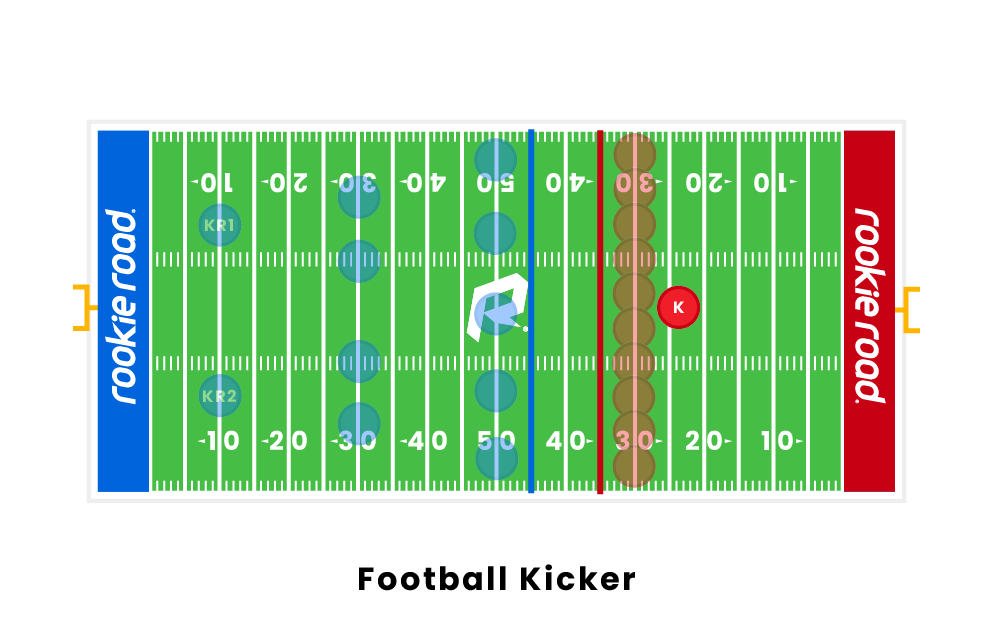 A kicker (K), also known as a placekicker, in football is a player on special teams with a job of kicking field goals, extra points, and kickoffs. Read on to learn more about the kicker position, including responsibilities, skills, and positioning.

The positioning of a kicker depends on what kind of kick is being attempted. On extra points, the line of scrimmage is at the 15-yard line in the NFL and the 3-yard line in the NCAA. On kickoffs, the ball is placed on the 35-yard line in both the NCAA and the NFL. Field goals can be attempted from any position on the field in either league, though being closer to the goal posts is certainly advantageous.

Kickers are typically positioned about seven or eight yards behind the line of scrimmage for field goals and extra points. This gives them enough space to have the ball snapped, held, and kicked cleanly without the defense blocking the kick.

A kicker has a different goal in mind on different kicks. For example, on field goals and extra points the kicker is aiming to kick the football through the goal post. The goal post consists of two vertical “uprights” and one horizontal “cross bar” at the end of each end zone.

A field goal is attempted from anywhere on the field and is the result of the offense not getting a first down or touchdown. A team is rewarded three points for kicking a field goal and one for an extra point.

Another duty of the kicker is the kickoff. A kickoff occurs to start each half and after every touchdown or field goal. On a kickoff, the ball is placed on a tee on the 35 yard line. The kicker then kicks the ball downfield, changing the possession to the other team. The kicker’s job is to put the ball as far downfield as possible, without going into the end zone. This puts the opposing team at a less favorable field position to start their offensive drive.

On rare occasions, the kicker will attempt what is called an onside kick during the kickoff. It involves kicking the ball and having a teammate recover the football before a member of the opposing team does. An onside kick is a desperate attempt for a team to come back while losing, because they get possession of the ball twice in a row if they are successful. However, the success rate for onside kicks is very low.

The most important skill for kickers to have is a strong and accurate leg. The best kickers that make it to the NFL can consistently kick field goals over 50 yards. The strongest legs among kickers in the NFL are considered the most valuable. Kickers that convert a high percentage of their kicks, ideally over 90%, are also vital to NFL teams.

Kickers must also have a consistent approach when making kicks. This usually comes through constant practice and repetition. Elite kickers will have the same approach on every kick, resulting in consistent strikes.

Kickers are only on the field for a handful of plays per game, yet their time often comes with the game on the line and lots of pressure on them to succeed. Thus, kickers must be proficient in blocking out the noise and focusing on the kick.

A very similar position to the kicker, the punter is a player that kicks the ball on punting plays. They stand 10 to 15 yards behind the line of scrimmage. Once the long snapper delivers the ball to the punter, they will drop the ball and kick it before it hits the ground. Unlike placekickers, the punter will kick the ball while it’s in the air, instead of it being held in place. Also unlike placekickers, punters are allowed to kick the ball out of bounds.

What is a kicker in football?

What does a kicker do in football?

In football, a kicker is one of the best ways to score points in clutch situations. While it is true that the majority of points are scored by the quarterback and receivers, many games have been decided by points scored by kickers. The points gotten through field goals, kickoffs, and extra points can easily decide who wins a football game, especially during close matches.

What is an onside kick in football?

In football, an onside kick is when a kicker tries to kick the ball and have it recovered before the opposing team can gain possession. Though they rarely occur in actual play, onside kicks are a great way for a team to make a comeback while losing since it gives them possession twice in a row.