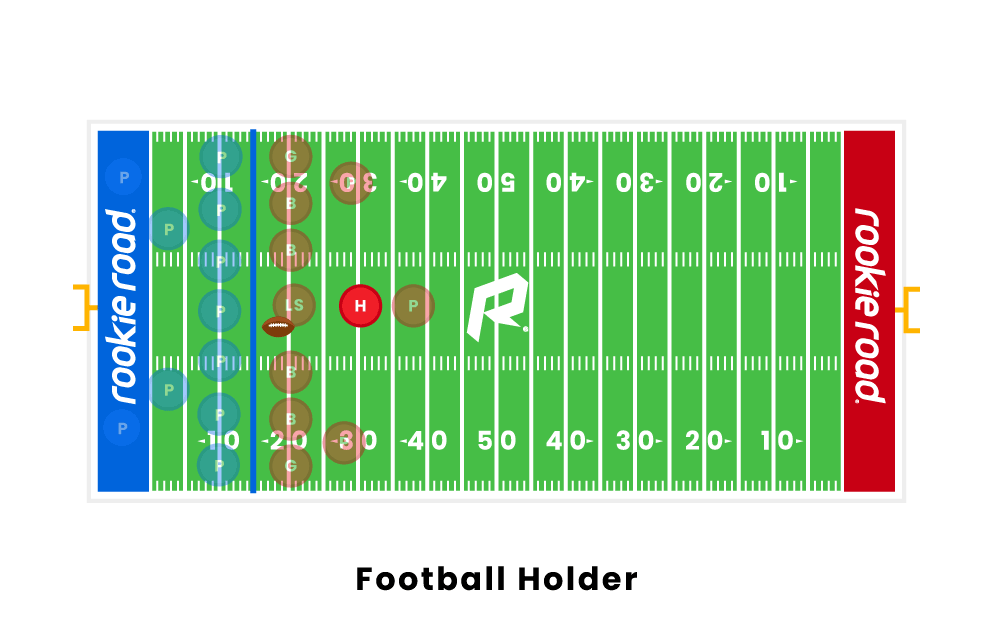 What is a holder in football?

The holder in football is a player on the special teams responsible for holding the ball in place for a kicker during a field goal or extra point. They will kneel down on the ground and receive a snap from the long snapper, then will carefully hold the ball on the ground for the kicker to kick. Read on to learn more about the holder position in football.

During a field goal or extra point, the long snapper snaps the ball seven yards back to the holder. The holder must catch the ball and position it on the ground for the placekicker to be able to kick the ball. That involves spinning the ball so the laces are facing outwards as well as tilting the ball slightly.

Holders are not used on every special teams occasion. During kickoffs, a tee is used instead. In the event that the wind keeps knocking the ball off the tee, a holder is permitted to enter the game to hold the ball. Punts do not involve a holder on any occasion.

In football, the holder very rarely only plays one position. In most cases, the backup quarterback takes on a second job of being the holder. That is because they are used to taking snaps as a quarterback does when they are holding the ball. There is also the chance that the special teams will want to run a fake field goal play and need a good passer to move the ball.

The second most common position to be a holder is the punter, who also has experience catching the ball from a shotgun position. Similar to both of those positions, holders are protected from being hit, with a 15 yard penalty for roughing the holder being enforced if they are.

As a non-skill position, holders go largely unrecognized by many. A good holder will likely go unnoticed in any given game while a bad holder can be a significant lowlight depending on where the score lies. In tense situations where a successful kick is the difference betweening winning and losing, the holder suddenly becomes very important.

A bad hold can be caused due to tough weather conditions such as rain, snow, or wind, which is why some holders choose to wear gloves. A bad hold is often called a botched hold while a muff is usually used only for punts.

How far is the holder from the line of scrimmage in football?

What position players are holders in football?