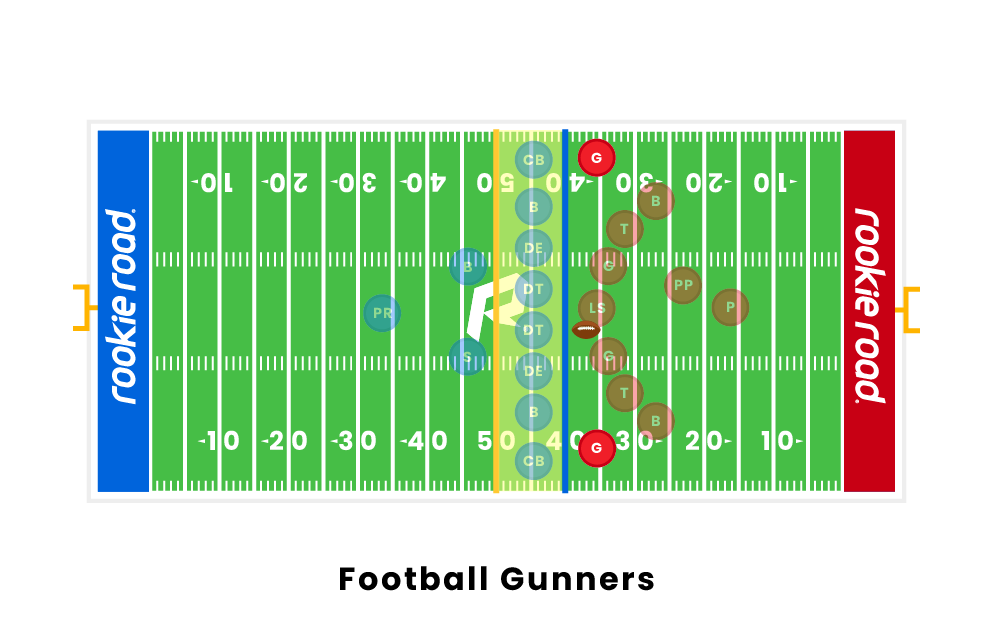 A gunner is a player on the special teams who stands close to the sidelines on a kicking play. Gunners are responsible for tackling the returner on punting plays.

Gunners also play positions like defensive backs, running backs, or even wide receivers when they’re not gunners. This means that a player typically does not play only gunner.

Gunners are known for “gunning” it down the field, meaning that these players have to be some of the fastest athletes on the field. However, a gunner’s course down the field is not usually linear. He has to run a lot of ground in a very short time, so he has to be fast on his feet and agile enough to change directions in an instant.

They must be strong enough to perform tackles on the returner. These kicking plays only last a few moments, but they can be the deciding factor and make or break a game.

A jammer is a player on the special teams that counters the gunner. During a return, jammers are on the receiving team and are responsible for stopping gunners from tackling the returner. Sometimes, a team will assign two jammers to a single gunner. This is because the gunner is so quick that it often requires more than one player to stop him. Jammers try to get the ball and run it back down the field for a touchdown.

What is a gunner in football?

In football, a gunner is a player on the special teams who stands close to the sidelines on a kicking play. Once the ball has been kicked, a gunner’s main responsibility is to run down the field and tackle the returner, the position player on the other team responsible for returning kicks by the gunner’s team.

What does a gunner do in football?

The main responsibility of a gunner is to tackle the other team’s returner. As soon as the ball is snapped, the gunners run down the sides of the field. If they are able to avoid the team’s blockers, they will tackle the returner and stop potential yardage from being gained. Gunners are a key part of the special teams’ success during a kicking play.

What is a jammer in football?