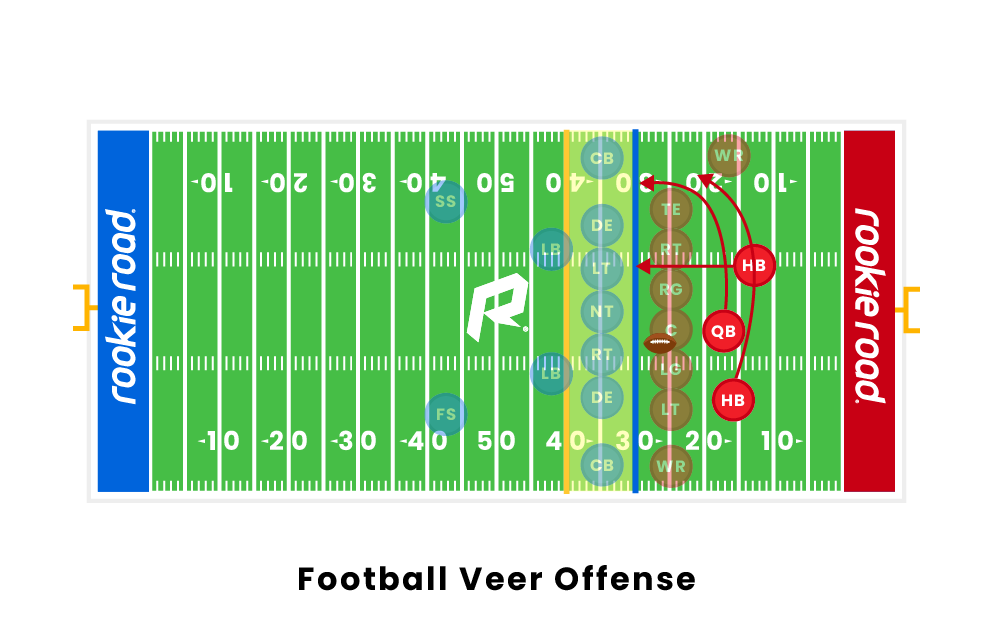 What is a Veer Offense?

In football, a veer is a type of option running play frequently used at the lower levels of the sport. The veer is most often used in high school football, but can also be effective at youth and collegiate levels. It was developed in 1965 by University of Houston head coach Bill Yeoman.

The veer is considered a triple-option play because it involves the process of the offense reading defenders and reacting accordingly in one of three ways, depending on what those defenders do.

There are a few variations of the veer play, including the inverse veer, inside veer, and outside veer. The play can be run out of a variety of formations as well, but it was created for a split-backed (pro set) offense.

Uses of the Veer Offense

The veer can be used to many advantages in a football game. Whether the offense’s goal is to take advantage of a weak defender, use clever blocking angles to help an undersized team, or simply just to confuse the defense, the veer can be useful. To properly utilize the veer, it is vital to have smart, focused players and a quarterback capable of reading defensive weaknesses.

How to Execute a Veer Offense

In a veer option, one player will be making a dive, one will be taking a pitch, and the other will be blocking. To start the play, the center will snap the ball to the quarterback, who will be accompanied by two running backs. The quarterback receives the snap, opens up their stance so they are facing the sideline, and extends the ball outward toward that sideline. The fullback (dive back in this situation) will now run into the line to meet the quarterback. At this point, the veer will begin to take its shape.

The offensive line will have left one defender uncovered, and it is that player's job to decide whether to tackle the quarterback or cover the dive back. The dive back will now run forward and extend their arms around the football as if they are receiving a handoff from the quarterback, but will not actually take the ball. It is now the quarterback’s job to read the uncovered player being veered and decide whether to give the ball to the dive back and have them attack the gap, or take it upon themselves to attack the gap. This is the first option in the veer.

If the quarterback’s read on the defense earlier in the play led them to this point, then it is the last option. As you can see, the veer is a very versatile play with many scenarios, but each one requires execution, focus, and proper reads from the entire team, especially from the quarterback.

Is a veer option offense a run play?

A veer is primarily a run play, but it also provides an option for a short pitch pass from the quarterback to a leading running back. A veer offense is a triple-option play. The other two options are for the quarterback to hand the ball off to a running back or to keep the ball and run it themselves. The veer does not traditionally have an option for longer passes, keeping the ball mostly on the ground.

How do you defend against a veer offense?

The main ways to defend against a veer offense are to cover the pitch back and to blitz heavily at the line. If a defender closely covers the pitch running back, the pitch option is removed, diminishing the effectiveness of the veer. Blitzes effectively remove all of the options by collapsing the pocket and forcing an unplanned pass downfield.