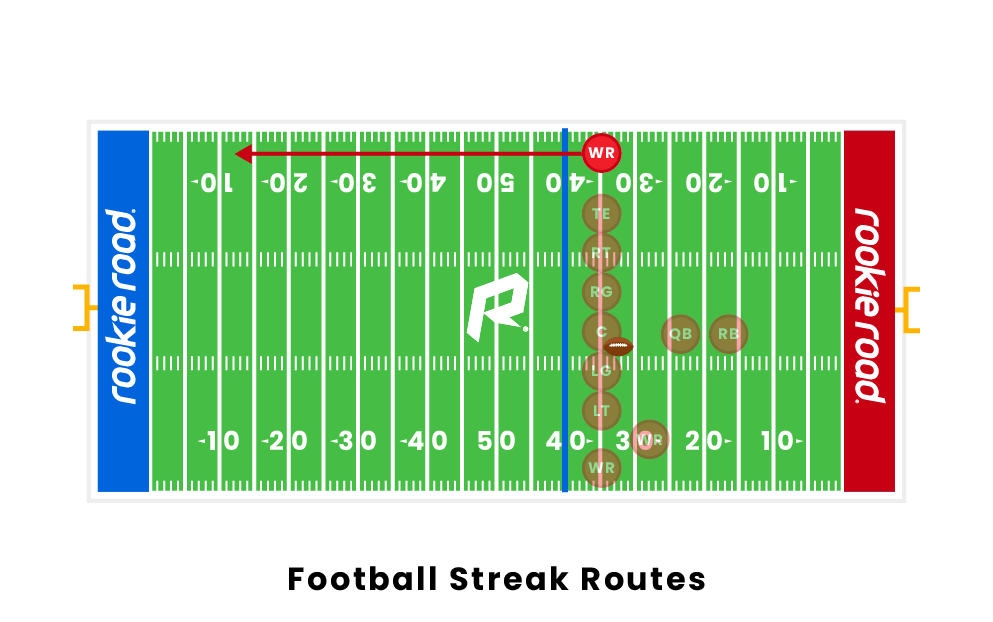 What is a Streak Route in Football?

A streak route in football is a pattern route in which a receiver runs straight downfield. Also known as go, fly, or vertical routes, streak routes are long routes that take a while to develop, often aimed at gaining more than a few yards on a catch. Receivers may bob or chop once they get close to the defender to fake them out and create separation. Some streak routes have specific names. For example, a streak close to the sideline is called a fade, and streak routes run between defensive zones are called seam routes.

When to Use a Streak

Streak routes, especially seam routes, are very useful for offenses facing a zone defense. The idea of the seam is to put a receiver right between two defenders forcing them to choose who covers the receiver. In a perfect defense, the defenders would be able to coordinate which player covers the seam and which takes another receiver; however, realistically, there are mistakes made that lead to either the seam route being completely open or double covered with a shorter route being open.

Streak routes are great when paired with out routes. They often help set up for a receiver on a shorter route to be open. This is best seen with flood routes. In the most typical flood play, a wide receiver runs a streak, a slot receiver runs a 10-yard out, and a backer or wing runs a waggle. These plays are great for exposing Cover 3 man defenses, in which priority is given to the deepest route, often leaving the 10-yard out or the waggle open.

The most commonly known use of the streak route is in a Hail Mary. This is a play where all four receivers run streak routes. This play is usually used as a last-ditch effort and is easily countered by a good prevent defense.

How a defender covers a streak route depends on the defender’s position and coverage. In a zone defense, a corner or safety’s number-one priority is to make sure they don’t turn out of their backpedal too late. The space between a defender and the receiver is a cushion, and when it gets too small, the defender must turn to run with the receiver.