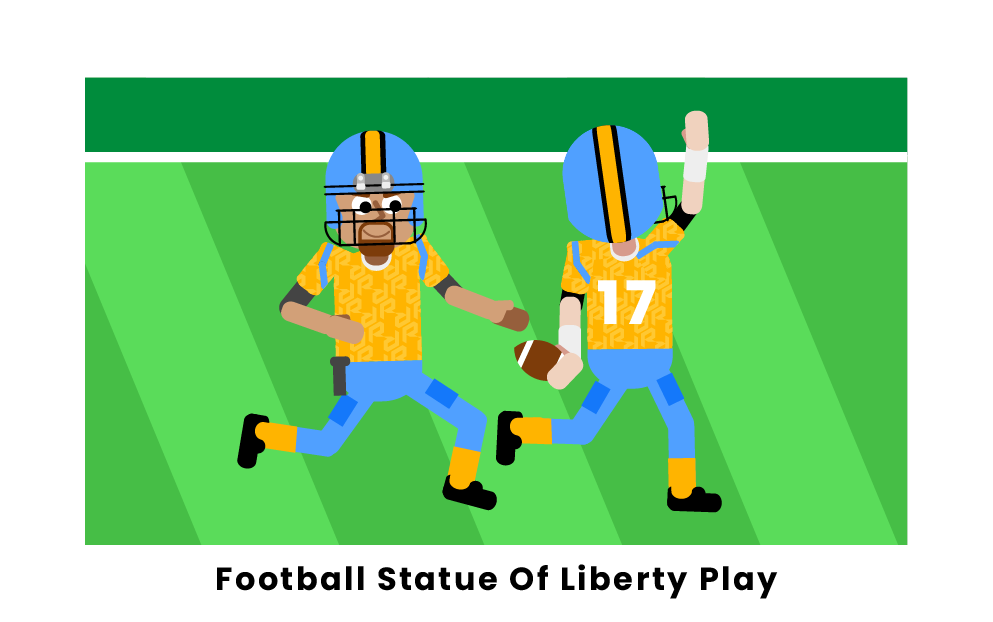 What is the Statue of Liberty Play in Football?

The Statue of Liberty play is a risky trick play in football that is known to be a ‘do or die’ play. The play could result in a huge loss of yards or even a turnover if any mistakes are made during execution. The core positions of the play are the quarterback, the running back, and the wide receivers. Read on to learn more about the design and history of the Statue of Liberty play.

The play begins with the quarterback and running back standing side-by-side in the shotgun formation, with usually two to three wide receivers on one side of the offensive line and one or two receivers on the other side. The ball is snapped to the quarterback, who grabs the ball with both hands.

The quarterback then grips the ball with one hand and lowers it down to their side ,while they use their throwing hand to pump fake, or act like he’s throwing the ball, to the Wide Receivers on the right side of the formation.

The play is named after the position of the quarterback. If performed correctly, they should have one hand in the air for the pump fake and the other at their side, similar to the Statue of Liberty.

History of the Play

The play is one of the rarer fake plays in football as it is much easier to break down by the defense than other plays. The first Statue of Liberty play was called by Amos Alonzo Stagg at the University of Chicago. Since then, the play has only been called a handful of times, mostly in lower levels of football.

The most famous use of this play occurred in the 2007 Fiesta Bowl between the Boise State Broncos and the Oklahoma Sooners. After using another trick play (called the Hook and Ladder play) to tie the game, the Broncos ran the Statue of Liberty for a game-winning two-point conversion in overtime.