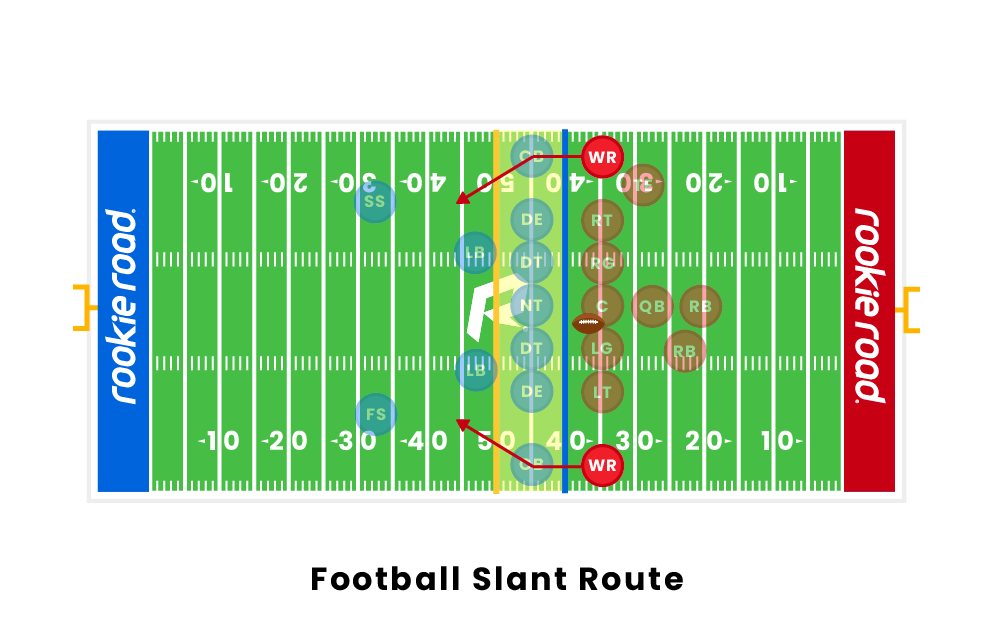 What is a Slant Route in Football?

A slant route in football is a pass route in which a receiver cuts towards the middle of the field sharply at a 45-degree angle. The cut is usually made after three steps forward, around five yards past the line of scrimmage.

When Do Offenses Use Slants in Their Plays?

Slant routes are a key part of the short pass game. They are great plays to run at the start of a set of downs to pick up quick yardage or on a third and short scenario to try and pick up the first down. When a quarterback is under center, they will take a three-step drop and throw the pass hard and fast right to their open receiver. From a shotgun, the quarterback only takes a one-step drop.

Because this route is so fast, it often demands the quarterback make an informed decision on where to throw before the snap occurs. This route is great for capitalizing on defenses where the defender plays off, five to seven yards deep past the line of scrimmage. Additionally, it perfectly exploits the gap between the corner and safety in a cover 2 defense. Along with the ability to complete a short pass, slant routes provide the potential for longer run gains if the receiver is able to break their coverage.

How Do Defenders Cover Slants?

Slant routes are best defended by man up defense, where a defender plays man and lines up only a yard away from the receiver. The key is taking away the inside arm of the receiver because this is the aiming point for the quarterback on a slant route.

However, some defenses will be hesitant to play a man defense in a situation where the corner is outmatched by their receiver or where there is more distance needed to attain a first down. For example, when an offense runs a slant route on first and 10, the defense may opt for a zone play. At this point, the receiver will have a window between defenders, and the defensive strategy then relies on a linebacker making an outstanding play or simply minimizing yards after the catch.