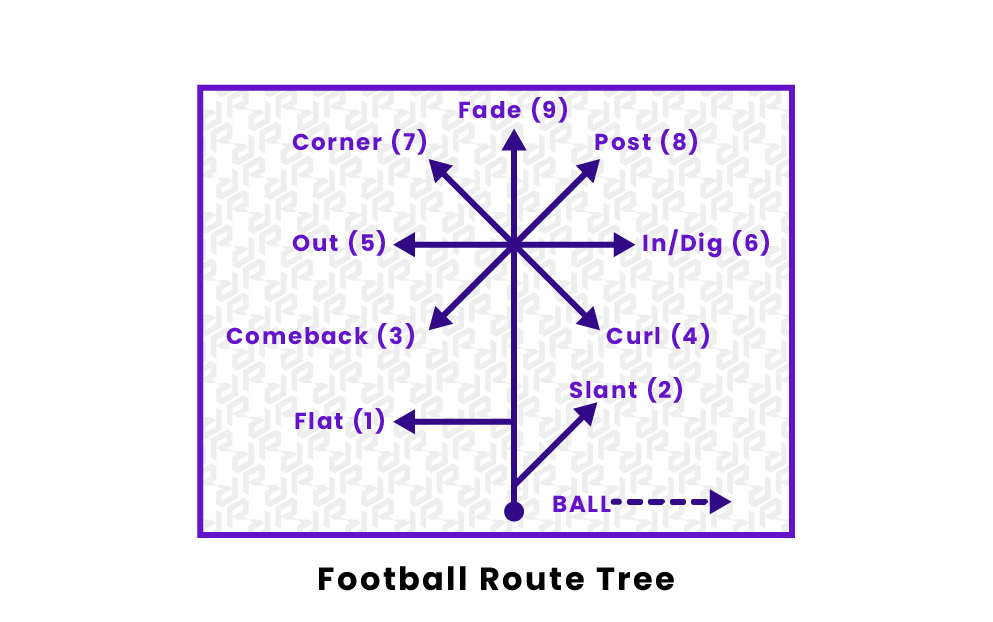 A route tree in football is a common set list of routes for passing plays by the offense that assigns a number value of 1-9 to each route. Route trees are used to refer to specific routes and route combinations in a timely manner as well as establish a common language regarding route patterns.

Using a route tree effectively will help wide receivers, running backs, or tight ends get away from defensive backs. However, defensive teams can also use the route tree to try and predict which passing routes the offensive team might be picking.

Routes in the Route Tree

There are nine different routes included in the route tree. Note that the odd-numbered routes (except #9) break away from the ball, while the even-numbered routes break toward the ball.

PRO TIP: In routes numbered 3-8, the receiver will want to make it seem like he is running a #9 in order to create more separation from the defensive back off the break.

The hitch route is not always shown on route trees because it is very simple. On the zero route, the receiver takes a couple hard steps forward before turning inside to catch the ball.

Also known as a “quick out” route, the flat is run from the inside of the field toward the sideline in three quick steps. A receiver running a 1 will almost always start closer to the ball in a formation.

The slant (also known as the “crossing route”) is one of the most common routes in all of football. The receiver of a slant needs to move quickly when the ball is snapped so they may catch the ball before the defense can react. This is done by either a three-step drop or a one-step drop.

In a comeback route, the receiver cuts back toward the sideline at a 45-degree angle after firing off the line of scrimmage. This is a difficult throw for the quarterback to make because of its depth, but the payoff can be big if done well.

The curl route is the same as a comeback, except the receiver will cut back toward the quarterback. The hook and ladder (or “hook and lateral”) is a popular type of play that uses this route to get the receiver a head start on gaining yardage.

An out (or “deep out” route) typically breaks to the outside at the first down line, especially during a late down and distance, such as 3rd down. This route requires a lot of room for the receiver to break from the defense and catch the ball while staying in bounds.

Also referred to as a “dig” or “deep-in,” the #6 route is the same as a #5, except the receiver breaks to the inside. This can be a dangerous route for a receiver if they are not aware of their surroundings, for cutting into the middle of a defense can lead to big hits and injuries.

The corner route, also known as the “flag”, is commonly used in goal-line situations. This is when the receiver makes a deep cut outside of the pack and runs up the field after a 45-degree turn. The corner is also used to stretch defensive zone coverages by attracting the attention of a safety.

Although there are many names for a #9 route, (the “go”, “fade”, and “fly” are just a few), it is the most basic route to understand. The receiver simply runs in a straight line to try and outrun their defender. The go route is high risk but also high reward.

What is a route tree in football?

What do the numbers mean on a route tree?

What are the routes on a route tree?