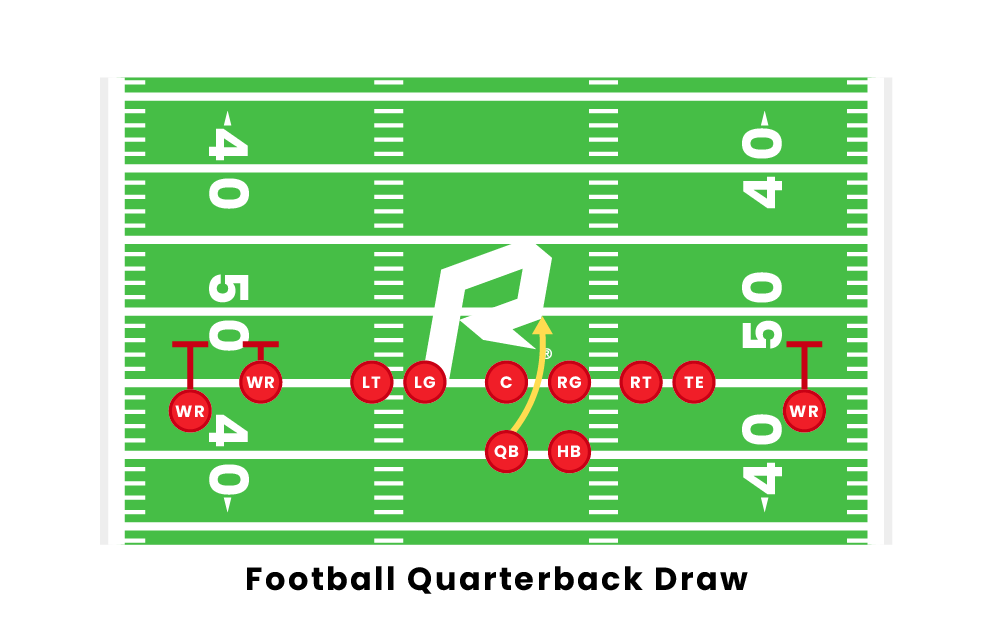 What is a Quarterback Draw in Football?

A quarterback draw in football is a play in which the quarterback receives a snap, usually in the shotgun or pistol formation, and then runs the football down the field themselves. There is a slight delay before the run begins in order to trick the defense into thinking that the play will be a pass. The hope is that the defense will drop into pass defense and create an open lane down the middle for the quarterback.

Strategy Behind the Draw Play

The advantage of the draw play is that the defense does not expect it. The quarterback is expected to take the snap and then throw the ball but ends up running.

This type of play is also useful against defenses with heavy pass rushes. They are “drawn” into the backfield, only for the quarterback to take off into the large gap they left behind. It is important for the offensive line to create a pocket around the quarterback and funnel the defenders around them to create the gap.

If an offense sets up the defense by running the play several times throughout the game the defense may elect to have a linebacker “spy” or guard the quarterback. By doing so the defense then has one less person in coverage, benefitting the offense.

The two characteristics that best determine a quarterback’s success at the draw play are speed and size. Fast quarterbacks can out maneuver the big defensive linemen while bigger quarterbacks can run through would-be tacklers. A combination of the two skills is rare but very effective in executing the play.

Michael Vick is considered to be one of the most dynamic quarterbacks of all time in part due to his ability to evade tacklers and run for huge gains. He is an elusive speedster that was a nightmare to defend during his career. Vick is the record holder for most rushing yards by a quarterback, most rushing yards by a quarterback in a season, and yards per carry amongst all positions. He would use his quickness and speed to take off before the defense realized it was a designed run play.

Newton is a guy who combines speed, size, and strength. He currently owns records for most rushing touchdowns by a quarterback and most rushing touchdowns in a season by a quarterback. He is also closing in on and on pace to break Michael Vick’s career rushing yards record. Even if a defender is able to properly read the QB draw, Newton’s size gives him the ability to break through tackles and gain yards. His size also allows him to sustain taking more hits than a typical quarterback.

Lamar Jackson was somewhat of an underdog during his rise to stardom in the NFL. After being awarded a Heisman in college, many teams questioned how Jackson’s throwing abilities would translate to the next level. Some teams even asked if he would be willing to transition to wide receiver or running back. Nonetheless, Jackson was selected by the Baltimore Ravens with the 32nd pick in the 2018 NFL Draft. Since then, Jackson won an MVP award in 2019 and has already broken the record for most rushing yards in a season by a quarterback and most 1,000 yard rushing seasons by a quarterback. Lamar’s main selling points are his incredible burst and blazing speed, which he uses to fly by the defense on draw plays.

Russell Wilson has long been known as a phenomenal quarterback when it comes to being able to move around in the pocket, both during his time with the Seattle Seahawks and the Denver Broncos. In fact, during the back end of his time with the Seahawks, he played behind one of the worst offensive lines in the league. This led to plenty of plays, both by design and not by design, in which Wilson would have to take the ball up the middle himself in an attempt to pick up some yards.

During his tenure with the Philadelphia Eagles, Donovan McNabb became known for his remarkable skill at rushing plays, in addition to his proficiency at passing. Beginning in 2000, his first season with Philadelphia, McNabb proved his worth as both a passer and a rusher, leading all other NFL quarterbacks in rushing yards that season. In the final four games of the 2000 season alone, McNabb rushed for 196 yards and scored two touchdowns by rushing. McNabb was only the third quarterback since 1970 to have more rushing yards than all of his teammates, and he currently has the fourth-most rushing yards of any quarterback in NFL history.

What is a draw play in football?

A quarterback draw is mainly designed to catch the defense by surprise, while a quarterback sneak is used to gain a single yard. In a draw, the QB will usually line up in the shotgun formation and fake as if they are going to pass it before taking off and running. If executed properly, a draw can gain over five yards. QB sneaks are mostly used any time the offense has one play left to gain a single yard. In this play, the entire offense lines up near the ball, and the offensive line drives forward to give enough space for the quarterback to gain the necessary yardage.

If used properly, quarterback draws can be effective. If they are used sparingly, draws can catch the entire defense by surprise and lead to a large gain for the offense. Conversely, a team with a good running quarterback may require the defense to employ a spy on them to try and prevent them from gaining chunk yardage on the ground. This causes the defense to have one less primary defender in the middle of the field.