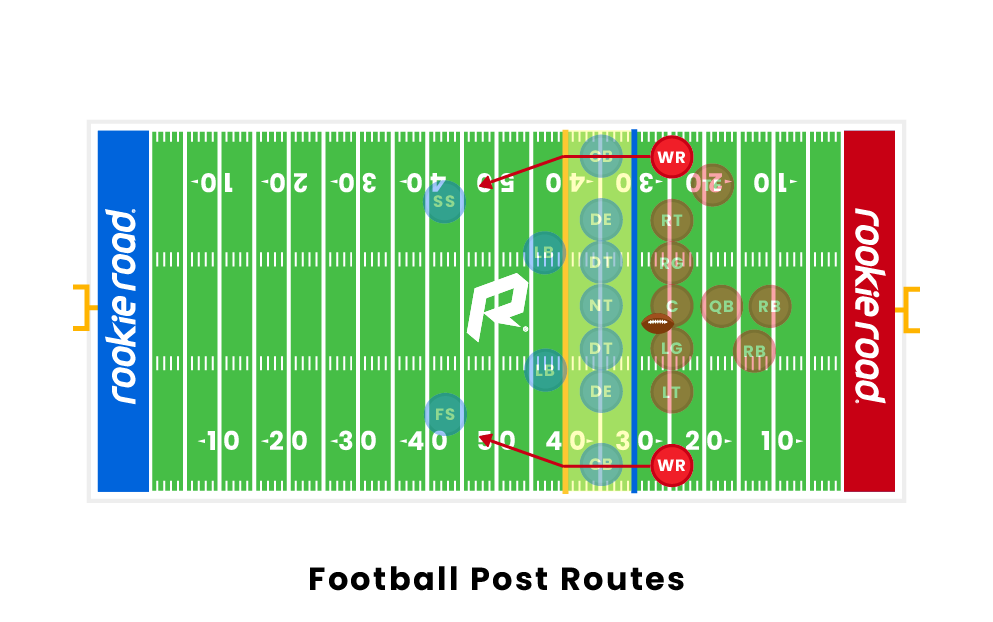 In football, a post is a pass route in which the receiver runs downfield, then turns and runs towards the goal post in the endzone. The cut in the route is usually made between ten and twelve yards downfield. The post is considered a long route, but it is similar to the short slant route.

Post routes are a key in the arsenal of a deep passing offense. The central idea is to use a post pass to expose a single high safety, especially those in cover 1 defense or cover 3. Putting two deep routes in the center of the field forces the high safety to either:

This second option can lead to an open receiver or an uneven matching. Post routes can also prove effective in running off safeties and cornerbacks to open up the short run game.

There is also a variant of the post where the cut is made at a shallower angle, and this is referred to as a skinny post. Skinny posts are designed to expose the gaps between deep defenders. The idea is to run the route between the gaps of a sideline defender’s zone and the close safety’s zone. This creates confusion in whose responsibility it is to cover the skinny post, typically leading to the skinny post being uncovered or double covered.

The most effective strategy for stopping post routes is the same for any long pass route: an effective pass rush game. Since posts are slow, deep routes, pressuring the quarterback will reduce effectiveness of the long game. Regardless of coverage, a good pass rush will stop a long pass play before the routes can even develop.