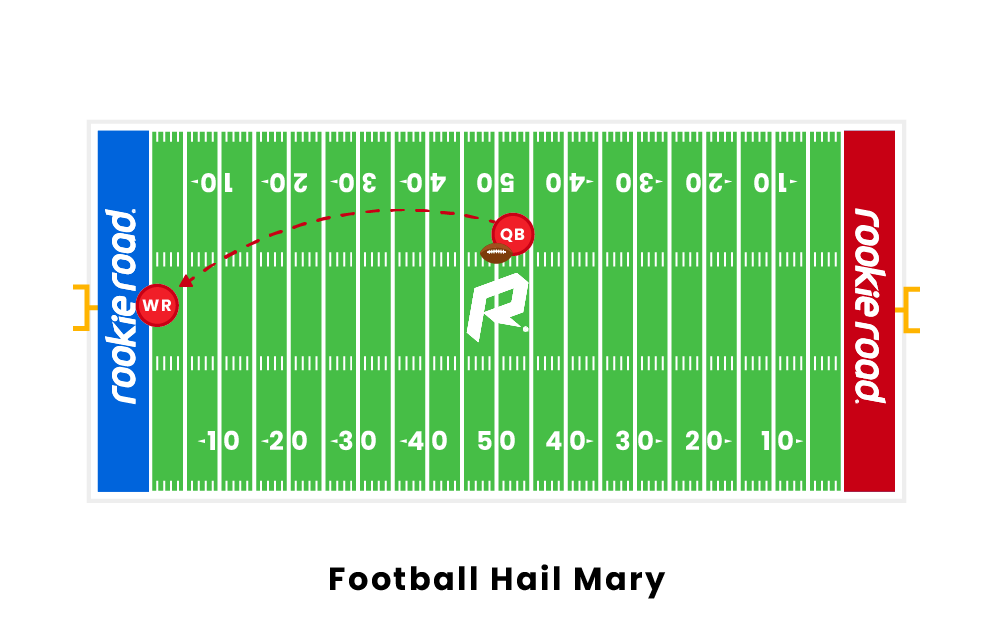 What is a Hail Mary in Football?

In football, a “Hail Mary” is a long pass made in a desperate situation with little chance of success. Hail Marys are used as a last-ditch attempt by the offense to score a touchdown with time expiring. The term Hail Mary has been used in football since 1922, but it became more common as a name for a long pass after a famous deep pass by Dallas Cowboys quarterback Roger Staubach in 1975, in a playoff game against the Minnesota Vikings.

The Hail Mary play gets its name because the offense is essentially saying a prayer by sending every receiver more than 40 yards down the field in a straight vertical line, with the quarterback ultimately heaving the ball and hoping one of his teammates makes a miracle catch.

When to Run a Hail Mary Play

A Hail Mary should exclusively be called when the offense only has time to run one more play. This situation arises mainly at the end of games, in which there are only a few seconds left in the game, and the offense is far away from the end zone, needing a touchdown to win. The offense may also attempt a Hail Mary on the last play before halftime, although the same do-or-die implications do not exist.

There are several different types of play calls that qualify as a Hail Mary. The traditional version has every receiver run a fly or streak route (running forward in a straight, vertical line for over 40 yards). Other receiver routes can be incorporated into the Hail Mary to help maximize the chances of the last-ditch attempt working. For example, one of the inside receivers might run a post (running forward 10 to 20 yards before breaking towards the middle of the field at a 45-degree angle). Outside receivers closest to the sidelines may try to utilize a “stop and go,” in which a stutter-step is performed to fake out the defense before racing towards the end zone.