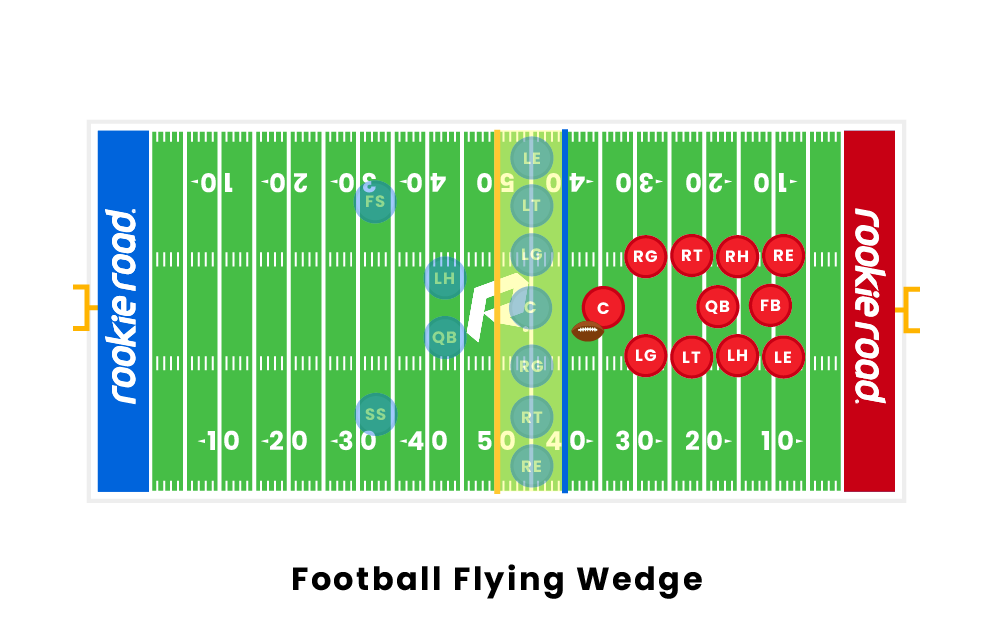 The flying wedge (also known as the flying V) was an offensive tactic previously used in American football, among other sports. This tactic proved to be extremely successful and became one of football’s most iconic formations. However, it was eventually banned from football altogether due to the number of injuries and deaths it caused.

How Does a Flying Wedge in Football Work?

In the flying wedge formation, blockers would link themselves together in a triangle or wedge formation to surround the ball carrier and then run forward at full speed. It utilizes momentum and brute force to be so effective at protecting the ball and destroying defenders. This makes it almost impossible for a defender to reach the ball without dangerously throwing himself directly into the wedge and through multiple offensive players running straight on at high speeds.

History of the Flying Wedge

The flying wedge play was originally drawn from military formations used in ancient times, as far back as the Romans. In military capacities, it was utilized as recently as World War II, when it was deployed by the Germans in the form of tanks and armored units. In modern times, the flying wedge is also occasionally used by police forces during violent mobs or riots.

In 1892, Harvard football coach Lorin F. Deland introduced the tactic to football. It proved to be extremely effective but frequently resulted in severe injuries. Head, neck, and spinal injuries were most common among these players. Numerous players even died from the injuries sustained from their participation in the flying wedge. According to historical records, 22 players were killed as a result of flying wedge formations in the year 1905 alone, and the problem grew so rampant that local newspapers began to publish weekly tolls of injuries and deaths related to the flying wedge.

The long line of injuries, deaths, and overall violent nature of the play eventually led President Theodore Roosevelt, a huge football fan, to call a summit on the flying wedge, whereupon it was banned from being used in all forms of football. While the ban took effect immediately, an altered form of the flying wedge, which was used during kicking plays, was revived for some time. In 2008, several serious injuries occurred thanks to wedge formations, including a concussion for Giants linebacker Jonathan Goff. John Mara, his coach at the time and head of the NFL competition committee, successfully pushed for a league-wide ban on the alternative flying wedge the following year.

Outside of football, the flying wedge was also once utilized in rugby union and rugby league. However, it is also banned in both forms of rugby due to the brutal nature of the tactic and the frequency with which it causes injuries.

When was the flying wedge banned in professional football?

The original flying wedge formation was banned in 1905, after President Theodore Roosevelt campaigned for it to be eliminated from football on account of its high death toll. However, an alternate form of the flying wedge, which was used by kicking teams, lasted for some time, but was ultimately banned from the National Football League in 2009. The decision to ban this offensive formation was based on the dangers it posed to defensive players attempting to stop the ball. Additionally, the NFL now also forbids players from linking arms or hands with players on their team for the purpose of blocking.

Who invented the flying wedge in football?

The flying wedge was first utilized in football in 1892, by Harvard football coach Lauren F. Deland. Deland first used this formation against Yale football, with the intention of drawing Yale offsides so that they could earn themselves a penalty. However, this tactic was not successful, and Yale football remained onsides despite the unorthodox formation. Until both its original and altered forms were banned, Deland’s tactic was influential on American football defense strategies for over a century.

Is the flying wedge banned from other sports?

Yes, the flying wedge is banned from both American football and rugby. In both sports, the formation has led to unfair offensive strategies, as well as numerous head, neck, and spinal injuries. While the formation is no longer used in sports, it is used for other applications such as policing. Police officers have been known to utilize this formation to break up large crowds, often with riot shields and protective gear.

Flying wedge and flying V are both names for the same type of formation in football and rugby. Both names relate to the primary intent of the formation, which is to form a V-shaped wedge with the offensive players in order to defend the ball. This unique shape is what led to both names of this formation being popularized.