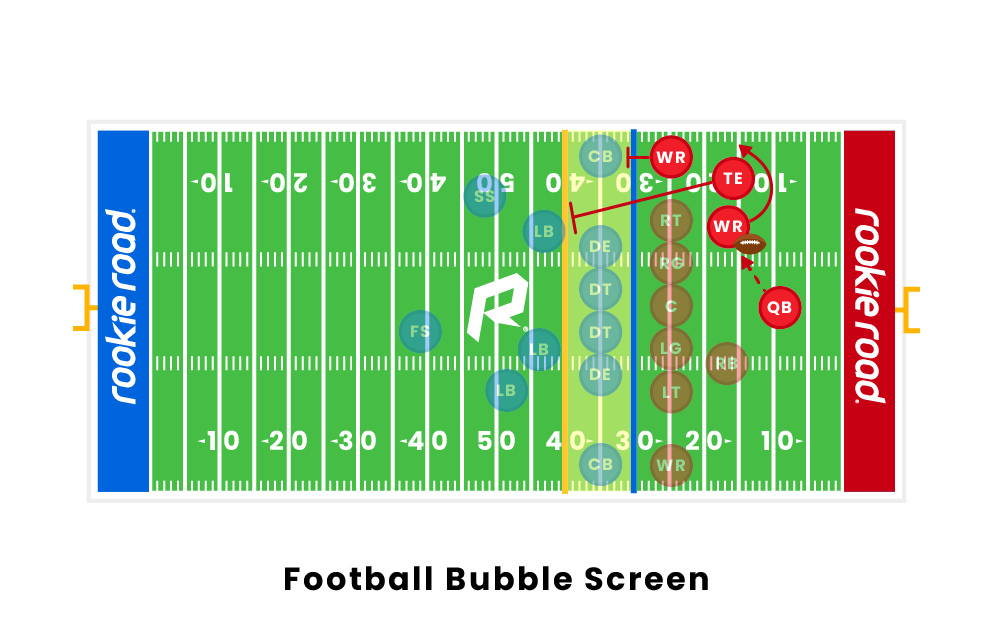 Many football fans have heard of screen passes before, but not everyone has heard the term “bubble screen.” For those who don't know what a bubble screen is, read on to learn all about this unique type of screen pass, how it is used, and what its advantages and disadvantages are!

What is a Bubble Screen in Football?

A bubble screen in football is an offensive play where the receiver runs on a curved path to the side of the field to catch a quick pass from the quarterback. After the catch, the other offensive players on that side of the field block for the ball carrier to open a path down the sideline. It is a type of screen pass focused on quickly passing off the ball to a receiver who is protected by a “screen” of other players. This screen action creates a path between the screen and the sideline for the receiver to carry the ball and run.

In one type of standard bubble screen formation, the offensive line will line up with the two receivers and the tight end on the strong side of the field, with another receiver and back lined up on the weak side. During the play, the inside receiver on the strong side runs the bubble motion toward the sideline, while the tight end and other receiver block the opposing defensive backs. The quarterback throws the ball to the open receiver, who runs towards the sideline, and can hopefully get past the defense and break for the end zone.

Bubble screens do not necessarily have to involve all of the players above making these exact motions. The simple, general principle of a bubble screen is to have a receiver or tight end follow a curved path toward one of the sidelines when the ball is snapped so that they can receive a pass from the quarterback and hopefully take advantage of an open space made by their fellow offensive linemen and receivers executing blocks near the sideline.

Like all screens, the bubble screen is most effective when used against a defense that likes to rush the quarterback. Since a screen is a quick pass, it makes rushing the quarterback less effective and can quickly catch the defense off-guard. Because the movement of offensive linemen causes the quarterback to be more vulnerable during a screen, the play encourages defenses to rush the passer, which will hopefully result in there being fewer defenders in the backfield to prevent a long run by the receiver who catches the pass.

Bubble screens aim to spread out the defense and take advantage of a receiver’s speed. For this reason, they are usually run in a spread formation rather than a tight one.

A bubble screen is known as a quick hit play and must be rapidly executed to be effective. The quarterback must properly read the defense before attempting this play. Bubble screens are an excellent way to speed up gameplay and offer fast receivers and backs the ability to make a big play. Due to their fast-paced nature, bubble screens are a great way to protect quarterbacks from getting sacked by staying in the pocket too long.

Although bubble screens are excellent for getting more distance out of a sideline run, they are vulnerable to reads by skilled linebackers. If a defender in the backfield can get a running start toward the sideline downfield, they will be able to easily head off a run, making an easy tackle and reducing the yardage that is gained.

How do you run a bubble route?

The intended receiver runs a bubble route by taking a curved path toward their sideline as soon as the ball is snapped. The quarterback will throw them the ball as quickly as possible. As soon as the intended receiver makes the catch, they will run directly down the sideline, with their fellow receivers and tight ends serving as blockers against any backfield defenders.

What is a bubble pass?

A bubble pass is a short, quick pass made by a quarterback to a receiver under a bubble screen. Bubble screen plays are meant to be executed quickly, so a quarterback will throw a bubble pass as soon as their intended receiver is in position along the sideline, spending as little time in the pocket as possible. Bubble passes are short and directly to the sideline, relying on the receiver’s rushing to pick up yardage.

Why is it called a bubble screen?

A bubble screen gets its name from the way that the intended receiver “bubbles” back and away from the ball and the quarterback. When running to the sideline in a bubble play, the receiver may take a slightly backward path, only coming back to the line of scrimmage as they approach the sideline to make the catch. This curving motion gives its name to the bubble screen, bubble route, and bubble pass.