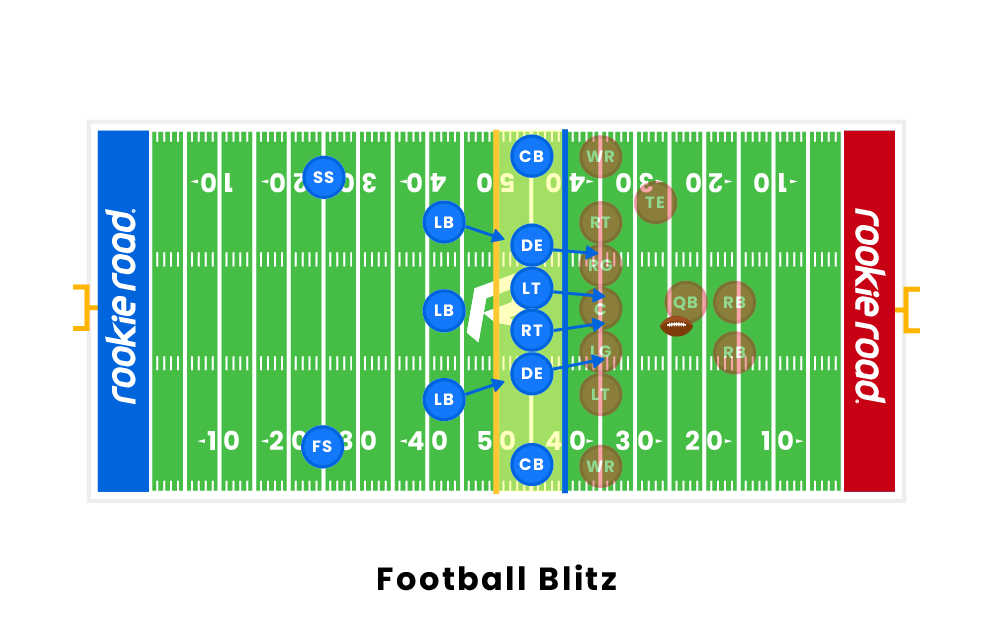 If you’re a football fan, it’s likely that you’ve heard the word “blitz” before and have a basic idea of what it means. But what exactly is a blitz, and what are the strategies coaches and players use when employing it as a play? Read on to learn more about blitzing, including the strategy behind the play, different types of blitz formations, strengths and weaknesses, and which players are involved in a blitz!

What is a Blitz in Football?

A blitz is used for two primary functions: to sack the quarterback before they can throw the ball or to guarantee a quick stop on a run play. The term “blitz” is derived from the German word blitz, which means “lightning,” and the play was partially inspired by the German blitzkrieg (“lightning war”) strategy in World War II, which was a type of attack that involved striking hard and fast with an overwhelming force to defeat the enemy.

A blitz is a very risky play to run. You have more defenders attacking the football, but you also lose out on defenders guarding against the pass. If a blitz does not reach the quarterback fast enough, they will definitely have an open receiver to pass to, which is very costly. Toward the end of a game, especially if a team is down, their opponents can more safely and effectively blitz as they know the quarterback is likely to run a passing play. In those situations, there is less likelihood of a run and less of a need to defend against the run.

In a blitz formation, the remaining defensive backs have a larger area to defend against, as a defender typically in deep coverage has been taken away for the blitz.

Read on to learn more about a few of the major blitz formations:

A safety blitz involves one of the two defensive safeties (the free safety or the strong safety) also rushing the quarterback. This can be effective because it adds another defender to the blitz, but its major weakness is that it leaves receivers wide open and uncovered, making pass plays dangerous.

The riskiest blitz scheme, a zero blitz, leaves no safeties in deep coverage, sending every player to blitz or provide shallow man coverage. The zero blitz is always used in man-to-man coverage and is typically used when the defense is certain that the quarterback plans to run the ball.

Blitz formations are often run in a Cover 1 defensive shell, meaning that there is one safety covering the entire deep zone. In general, many NFL coaches prefer to run blitz schemes as part of a zone defense. In these packages, the remaining defensive backs cover deep passing and running lanes to stop any big gains in the event that the quarterback gets off a pass.

There are various strengths behind the blitz tactic that can make it an effective defensive scheme to use. The most obvious benefit is that blitzing is an effective technique for securing sacks, which can ruin an offense’s drive and suck the morale out of an opponent, in addition to losing them yardage.

Next, blitzing is a way to catch the offense by surprise. If the offensive is not expecting a blitz and leaves their line open, the blitz can easily surprise them and allow defenders to enter the gaps in the line and stop runs or passes.

Thirdly, blitzes put pressure on the offense, which can often cause incomplete pass attempts, result in fumbles, and possibly even cause an interception. Another advantage of the blitz is that the potential of it forces the offense to be selective with their playbook, as a defense that blitzes well can invalidate many of their play options.

Finally, blitzing is a great strategy because it forces the offense to act and think on its feet. The overwhelming defensive rush makes the quarterback’s window of decision-making very short, which can easily contribute to botched plays.

While there are many strengths to the blitz, there are weaknesses to it as well. One weakness is that a blitz can be fairly easy to spot before the play begins, and a keen-eyed quarterback can often anticipate it and communicate the blitz to his offensive linemen prior to the snap, meaning that they will be more prepared for the blitz.

Secondly, because a blitz is an overwhelming rush on the quarterback, it often leaves players at the ends of the offensive line, like wide receivers, less covered. This means that they can potentially slip by the blitz, receive a short pass, and gain lots of yardage.

A third, similar weakness of the blitz is that it leaves a very bare backfield. Thus, if a running back manages to find a break in the blitz and sneak through, they will likely have an open field to make a big play.

Players Involved in a Blitz

The following players are typically involved in a blitz play:

What is a blitz in football?

A blitz in football is a defensive scheme in which five or more players attempt to rush the quarterback instead of the four players typically used. The goal of the blitz is to break through the offensive line and sack the quarterback before they can complete a pass or handoff. Blitzes can be risky plays as they leave fewer available defenders in deep coverage. If the quarterback is able to make a play against a blitz, there is a greater chance it will result in yardage gained.

What type of offense is best against a blitz?

The best types of offense against a blitz are combination routes and max protection. Combination routes send receivers along irregular routes to all corners of the backfield in an attempt to overwhelm and defeat a depleted secondary. Max protection assigns seven or more players to protect the quarterback against the rush, effectively countering the blitz with brute force at the line of scrimmage.

When should you blitz in football?