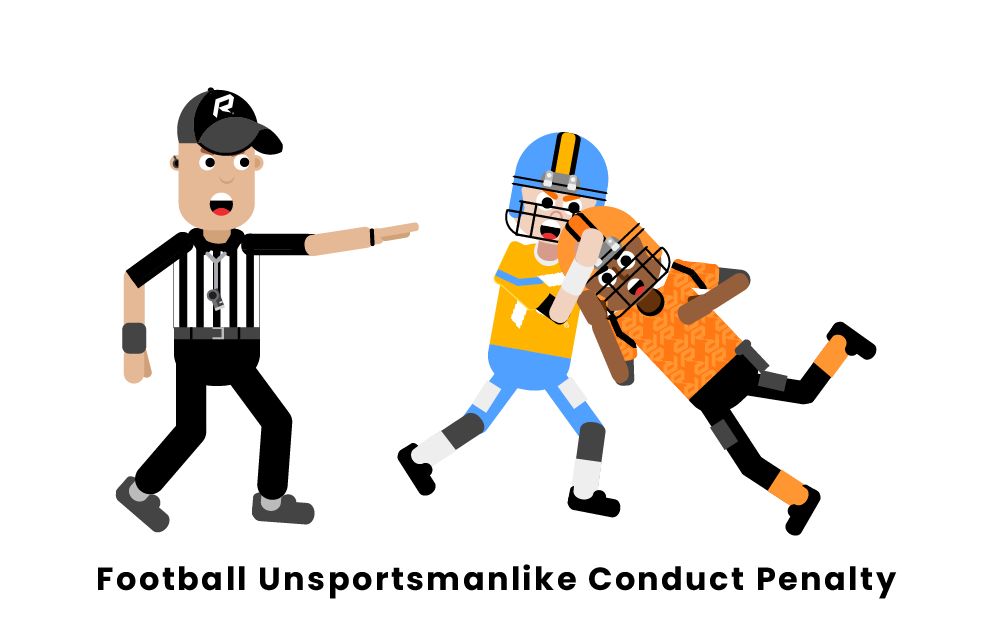 Unsportsmanlike conduct is a major penalty in American football. Football is an extremely physical sport but it also demands the players to follow rules of general sportsmanship of which they are acutely aware. In the NFL, a violation of these rules will result in a penalty of 15 yards and, if it is committed by the defense, an automatic first down.

Unsportsmanlike conduct is a general term that can describe any one of a number of prohibited acts that violate the rules of general sportsmanship. Football leagues prohibit many acts which may include: illegally striking a player in anger, using abusive, threatening or insulting language or gestures to anyone in the stadium, excessively taunting the opponent, unnecessary physical contact with an official, excessive celebration, removal of one's helmet as a demonstration, concealing the ball under the uniform, using substitution as a way to confuse the opponent, or calling successive timeouts without a play being run.

When a player or coach is flagged for unsportsmanlike conduct, their team is penalized 15 yards and, if the violation is called on the defense, the offense is awarded an automatic first down. If committed after a scoring play, the 15 yards will be enforced on the ensuing kickoff. If the infraction is deemed to be flagrant by the referee, the player or coach can be disqualified. Also, if the same player is flagged for 2 unsportsmanlike conduct penalties in the same game they may be disqualified.

The sport of football has existed for over 100 years. Over those years there have been many changes both within the game and with the players. The players today are bigger, stronger, and more athletic than ever before which has led to many more fantastic and acrobatic highlight plays. Football has grown to be the number one spectator sport in America with an extremely large TV audience tuned-in to the NFL and NCAA games over the weekend. The leaders of the football leagues, in a desire to curtail unsportsmanlike spectacles and needless injuries, amended the unsportsmanlike conduct penalty in 2016 to include actions after the whistle such as touchdown celebrations using a prop or those deemed "choreographed." In response players and sportswriters began referring to the NFL as the "no fun league."

The result of an unsportsmanlike conduct penalty is a loss of 15 yards and an automatic first down, when committed by the defense, in most leagues. If committed after a score, the penalty is enforced on the next kickoff.

On the penalty for unsportsmanlike conduct, the referee will hold their arms straight out with their palms facing downward.