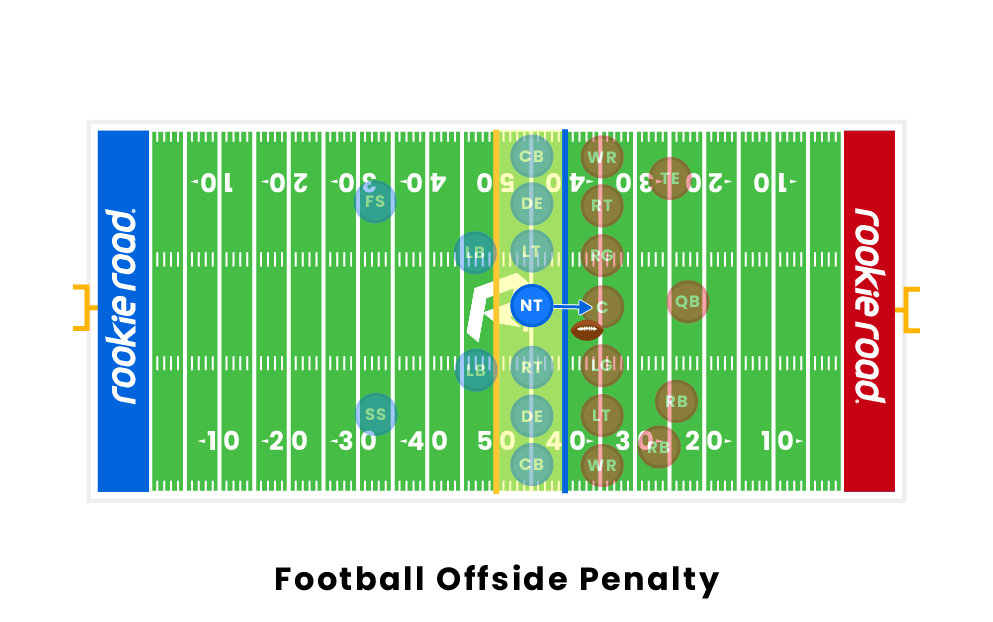 The offside penalty in football is when a player moves across the line of scrimmage before the quarterback snaps the football. This foul can be committed by either team, but it is typically called on the defense. A quarterback will sometimes use a hard count, which is a way to try and get the defense to jump into the neutral zone, resulting in an offside penalty. This is a pre-snap penalty, so most of the time, the play is blown dead before it happens, and a five yard-penalty will be awarded.

If the defensive player who jumped offside is not an imposing threat on the quarterback, the play continues, and this is called a “free play.” This is allowed because, regardless of the result, the offense will get at least five yards from the penalty. This can also be committed by the offense, but it is a lot less common. Offside is only called on the offense when an offensive player is lined up in the neutral zone. A more common pre-snap penalty for the offense is a false start.

When a player jumps or is lined up offside in any football league, the referee will award the offensive team five yards, and the down will be replayed. This penalty will only result in a first down if there were less than five yards to gain during that play. For example, if it was a 1st and 10, the team would replay the down and have 1st and 5. If it was 2nd and 3 though, the team would be awarded the first down because there were only three yards to gain to get the first down. The next play, in this instance, would result in a 1st and 10.

To signal an offside penalty, the referee will put both hands on their hips and announce both the offending player and the loss of yardage. This is a very basic penalty and is clear-cut for the officials to determine.

What is the penalty for offsides in football?

In football, the penalty for offsides is always a loss of five yards from the line of scrimmage and an automatic first down. This penalty is the same in both rule and penalty across the NFHS (high school), NCAA, NFL, and CFL. The penalty is usually called on the defense, but the offense can also be penalized.

What is an offside penalty in football?

An offside penalty in football occurs when a defensive player crosses the line of scrimmage prior to the ball being snapped. Offside results in a five-yard penalty against the defense. While both the offense and defense can be called for this penalty, it is usually called on the defense. The typical offensive equivalent of the offside penalty is a false start.

What is the difference between offside and encroachment in football?

Can an offside penalty be challenged in football?

Offside penalties in football are non-reviewable, meaning they cannot be challenged by coaches. Since offside is a judgment call made by the officials, it is non-reviewable. Other penalties similar to offside, including encroachment and false starts, are also non-reviewable.