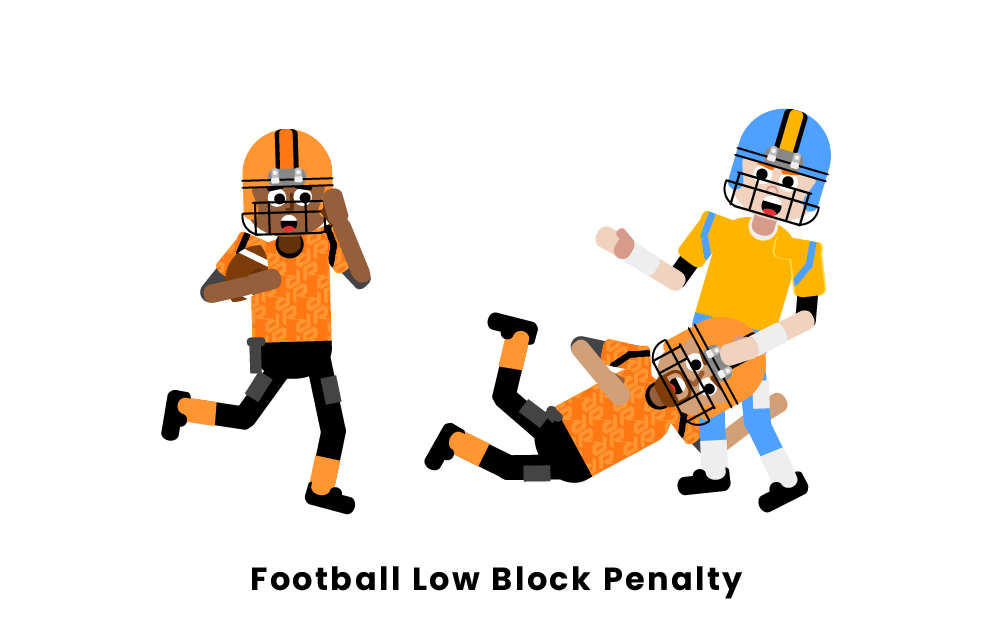 The low block penalty in football is called when a player makes a blocking move below the waist on an opposing player. It is very similar to the chop block or cut block, which pertain to blocks below and/or at the knees. Low blocks can be very dangerous, which is why they are considered to be a serious penalty. Low block penalties can only be committed during a change of possession or a kicking play.

The main identifier of this penalty is that it is called during kicking or change of possession plays. Any block below the waist during these times results in a low block penalty, but there are three primary situations in which the low block penalty may be called:

It is good to note that the low block is not called if the tackle is made against the ball carrier; it is only called in blocking situations, not just any tackle on the runner.

Similar to the chop block, the referee swings their arms towards right above their knees on their thighs below his or her waist. However, the main difference is that the referee strikes the front of their thighs to signal a hit below the waist. Several of the illegal blocking penalties have similar referee motions for signaling the penalty but involve hitting the side of the thighs or the calves.

What is a low block penalty in football?

Can you challenge a low block penalty in football?

According to the NFL rulebook, penalties for illegal blocks are considered non-reviewable, so they are not able to be challenged by coaches. This means that low blocks are a judgment call made by on-field officials.

What is the penalty for a low block in football?

In football, the penalty for a low block is typically a loss of 15 yards for the offending team. This rule and yardage loss is universal across the NFL, the NCAA, and the NFHS (high school football). The one exception is the CFL, which has a rule against low blocking but only assigns a 10 yard penalty to the offending team.