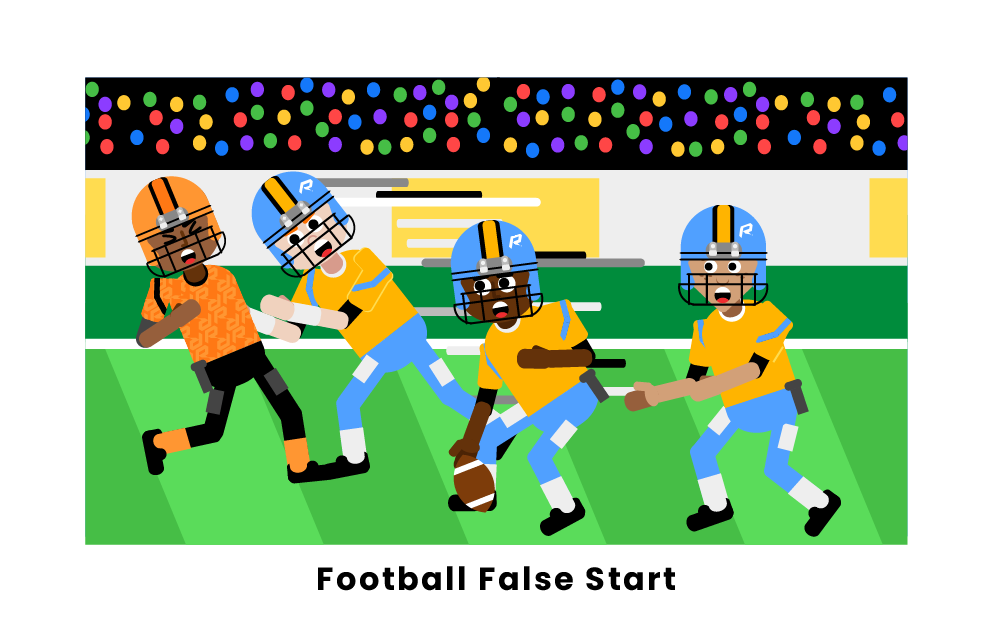 A false start penalty when an offensive player either is not set or jumps the snap, meaning they move forward before the center snaps the ball to the quarterback. This is a pre snap penalty. On offense, all 11 players on the field need to be set. This penalty occurs when offensive players are not set before the snap of the ball.

Offensive linemen are called for false starts most often. This is because they are most likely to jump at the sound of the snap or a potential defender rushing at them. Blocking tight ends are in a similar position. Linemen and blocking tight ends also have to jump out of a stance which makes them more susceptible to getting called for this penalty.

When skill position players (running backs, wide receivers, and tight ends out wide) are not blocking on the line of scrimmage, they are much less likely to be called for the penalty. However, any of the 11 players on the offensive side of the ball can be called for this penalty, even the quarterback.

When a false start occurs, the play is blown dead immediately and a 5 yard penalty is charged to the offense. Then, the down is replayed. This result is the same across all football leagues.

To signal a false start penalty, the referee will roll their arms in front of their body in circles. The referee then points in the direction of the offense and says the number of the player who committed the penalty.

What is a false start in football?

In football, a false start occurs when an offensive player moves out of their set stance or moves towards the line of scrimmage before the ball has been snapped. The reason for this penalty is that it is unfair for play to begin before the quarterback even has possession of the ball. For every false start, five yards is lost while the down remains the same.

What is the penalty for a false start in football?

In football, the penalty for a false start is a loss of five yards while the down remains the same. Once a referee has blown their whistle and declared a false start, both teams must get back into starting position along a line of scrimmage that is five yards below where it previously was. This penalty is fairly common and has the same punishment in every football league.

What positions commit the most false start penalties?

Offensive guards and offensive tackles commit the most false start penalties in the NFL. This is likely due to the nature of the position, which is to quickly rise from their set position to block for the quarterback. Since they are required to jump from this position as quickly as possible after the ball is snapped, it is easy for them to misjudge and jump too early.