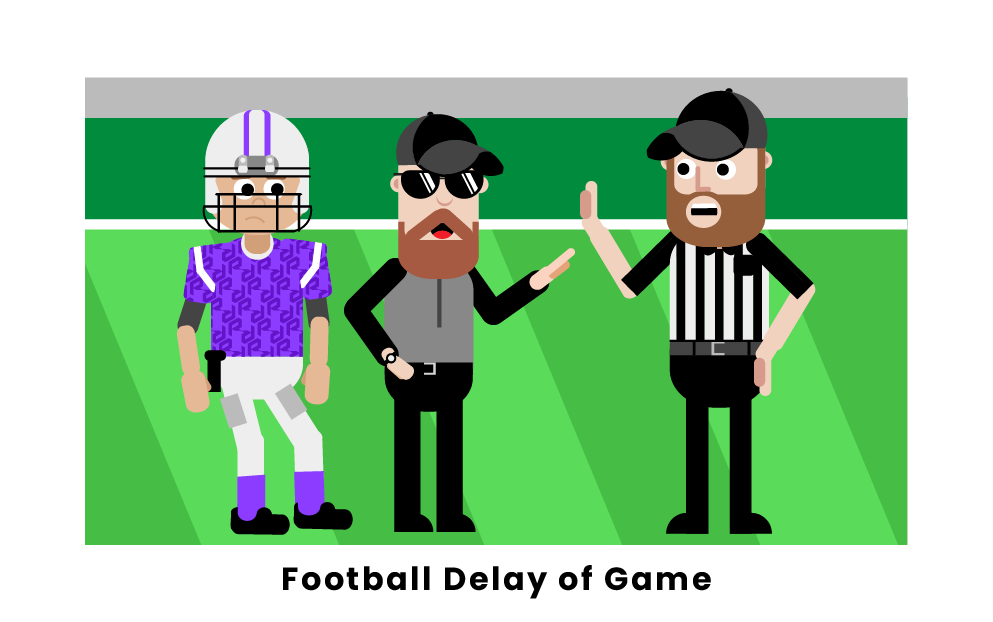 A football delay of game penalty occurs when the offense fails to snap the ball before the play clock runs out. This penalty is also called if a player delays the game by obstructing an opposing player, or the ball, from getting to the line of scrimmage on time.

A delay of game penalty is called by the referee when a player or team unnecessarily affects the time of the game.

The referee will call this penalty if the game has been delayed in any way. It could be called if the ball is not snapped before the play clock hits zero, a player forces a delay in the opposing team getting to the line of scrimmage on time, or a player stops the ball from getting to the line of scrimmage on time. In most cases, this penalty occurs when the quarterback doesn't snap the ball before the play clock expires. If a quarterback doesn't recognize the play clock is getting low, a head coach will often call a timeout to save the team from losing five yards.

Some teams will use this penalty to their advantage. A delay of game penalty could be purposely taken if an offensive team wants to try and draw the opposing team offsides, but it doesn't have any timeouts left. It could also be used in order to move a kicker or punter into a more comfortable position.

The penalty usually occurs due to miscommunication, resulting in the quarterback not realizing the play clock is running low. The play clock gets set at 40 seconds after each play. In some cases, such as a media or injury timeout, the clock will be set to 25 seconds. This penalty exists to keep the flow of the game going smoothly.

Delay of game penalties are usually called on the offense, but can also be called on the defense, special teams, or team as a whole.

The yardage lost for a delay of game penalty in the NFL, NCAA, high school, and AFL is five yards. The only league with a different penalty is the CFL, which calls for a 10 yard penalty.

The referee signal for a delay of game penalty is placing his left arm over his right arm, with both hands near the opposing elbow.

Similar Penalties To Delay Of Game